Pope will not attend U.N. climate summit in Glasgow 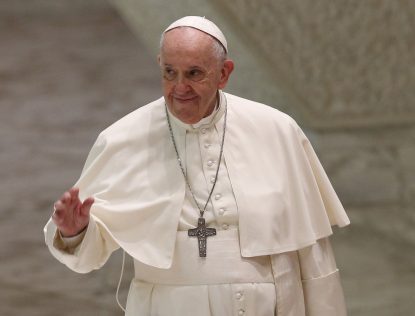 Pope Francis greets the crowd as he arrives for his general audience in the Paul VI hall at the Vatican Sept. 29, 2021. Pope Francis will not be attending the U.N. Climate Change Conference in Glasgow, Scotland, in November; Cardinal Pietro Parolin will head the Vatican delegation. (CNS photo/Paul Haring)

VATICAN CITY (CNS) — Pope Francis will not be going to the U.N. Climate Change Conference in Glasgow, Scotland, as he had hoped.

The Vatican released a statement Oct. 8 saying the Holy See delegation for the COP26 summit Oct. 31-Nov. 12 would be led by Cardinal Pietro Parolin, Vatican secretary of state.

A Vatican source said that the fact that Cardinal Parolin was leading the delegation meant the pope would not be going.

During an interview with COPE, the radio network owned by the Spanish bishops’ conference, broadcast Sept. 1, the pope was asked if he would be at the climate summit.

The pope said, “Yes, in principle the program is that I go. It all depends on how I feel at the time. But in fact, my speech is already being prepared, and the plan is to be there.”

PREVIOUS: Church must move from sorrow to action on abuse, archbishop says