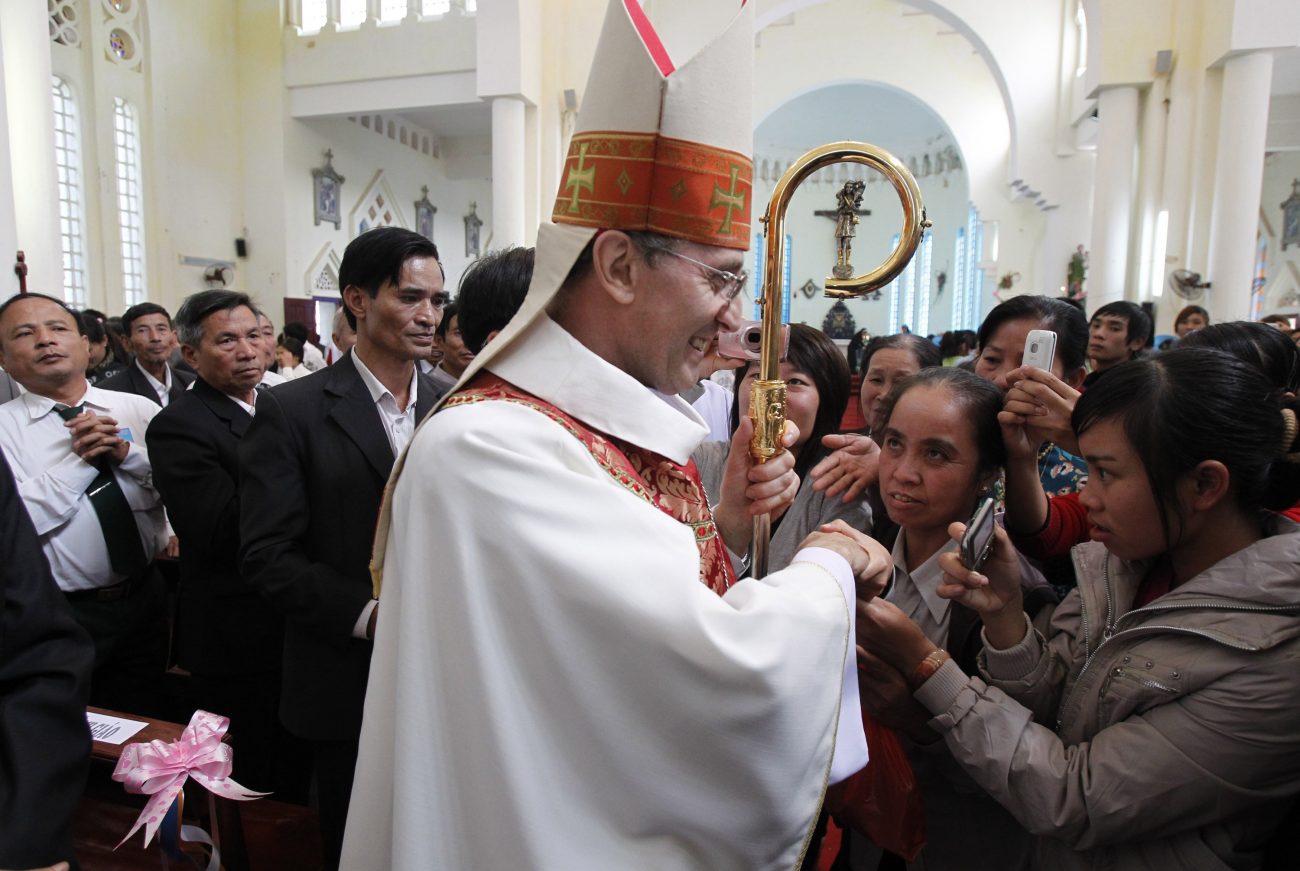 Archbishop Leopoldo Girelli, then nonresident pontifical representative for Vietnam, is greeted by people after Mass at St. Teresa Cathedral in Son Tay, Vietnam, in this Nov. 25, 2011, file photo. Archbishop Girelli, now the papal representative to India, has ordered Catholic bishops in the southern state of Tamil Nadu to stop priests from engaging in activities that make them "financial and political power bases." (CNS photo/Kham, Reuters)

NEW DELHI (CNS) — The papal representative to India has ordered Catholic bishops in the southern state of Tamil Nadu to stop priests from engaging in activities that make them “financial and political power bases.”

In a letter in early October, Archbishop Girelli noted a tendency among clergy to establish independent trusts “habitually registered under the guise of a nongovernmental organization, ostensibly intended to provide assistance to those in need.”

“Even if the aim of such trusts may appear to be praiseworthy, all too often these trusts become a political and financial power base for the priests involved.”

The Vatican official said these activities violate canon law and asked bishops to enforce the discipline of the law by closing down all private trusts that priests run.

Church laws ban priests and religious from directly associating with any independent or standalone trusts or societies or companies unless their involvement has specifically been authorized by the local bishop, the letter clarified.

It also reminded the bishops that canon law prohibits clerics “from conducting business or trade personally or through others, for their own advantage or that of others, except with the permission of the legitimate ecclesiastical authority.”

Archbishop Girelli also told the bishops that church laws authorize them to take action against erring priests. Clerics or religious who exercise a trade or business contrary to the prescripts of the canons are to be punished according to the gravity of the case, his letter said, quoting Canon 1392.

The nuncio’s letter asked the bishops to formulate clear guidelines to ensure that all trusts managed by priests come directly under the control of respective dioceses and that they are of genuine benefit to the mission of the diocese.

The dioceses should ensure that no trust is “under the sole control of the single member of the clergy,” the letter said.

The nuncio said his letter was being issued after visiting Kottar Diocese on the southernmost tip of India.

But Father V. Hilarius, Kottar Diocese’s vicar general, told ucanews.com Oct. 19 that the nuncio’s letter “has only highlighted the provisions of the canon law. It was a reminder to all of us.”

He said some priests establish organizations to help the poor as the diocese is not able to fund all the welfare plans, but the death of a founder and other members can lead to confusion over leadership and succession.

These organizations seek and accept donations from India and outside for charitable work and, over a period of time, become independent entities capable of managing projects independently of the dioceses.

The financial and social influence of the priests creates power imbalances in the diocese. It occurs in dioceses across India but is particularly noticed in southern states.

A senior priest who did not wish to be named said the nuncio was “boldly addressing a serious issue. This issue was discussed many times in the past, but no one dared to deal with it with the required seriousness,” he said.