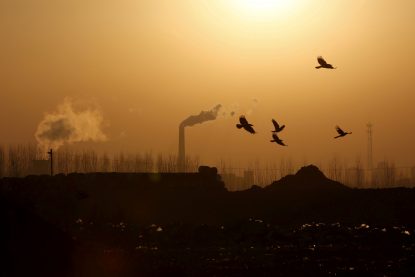 Tangshan, China, is seen in this illustration photo. Retired Chinese Catholic Bishop Stephen Yang Xiangtai of Handan was in a salt factory labor camp there in the 1970s. (CNS photo/Kim Kyung-Hoon, Reuters)

BEIJING (CNS) — Retired Bishop Stephen Yang Xiangtai of Handan, who was persecuted and forced to spend years in labor camps during the Cultural Revolution, died at the age of 98.

Ucanews.com reported Oct. 18 that a notice from the state-controlled Bishops’ Conference of the Catholic Church in China said he died of complications from old-age diseases Oct. 13.

The prelate was admitted to a local hospital after his health condition deteriorated. He had respiratory problems and inflammatory swelling of the body, leaving him unable to eat and sleep for days.

In a statement, Handan Diocese paid tribute to Bishop Yang.

“For 72 years, Bishop Yang has demonstrated strong faithfulness to the Lord, kindness to all, a life of simplicity and relentless dedication to his flock. Now that he has completed his journey, we request clergy, religious and faithful to pray for eternal rest of his departed soul,” the statement read.

He studied at the major seminary in Kaifeng in neighboring Henan province and was ordained a priest Aug. 27, 1949. After serving as a parish priest in Kaifeng for a year, he returned to his hometown and preached in Wu’an for 16 years.

Father Yang was arrested in 1954. However, he was released following trial and returned to his ministry.

In 1966, during the Cultural Revolution, he was rearrested, put on trial in 1970 and sentenced to 15 years in prison. He was sent to labor camps in Quzhou, Handan brick factory and Tangshan salt factory.

For the next 16 years, Father Yang served in various districts in Hebei that later became part of the Diocese of Handan.

Church sources told ucanews.com Bishop Yang did not want to be tagged as an “underground bishop,” though he was ordained with the Vatican’s mandate, and he also refused to give in and join state-sanctioned church bodies despite oppression from the Chinese regime.

On June 21, 2011, he secretly ordained his successor, coadjutor Bishop Joseph Sun Jigen of Handan, with the Vatican’s approval. In retaliation, the authorities arrested two priests and put Bishop Sun in custody, but released him three days later.

Bishop Yang denounced cross demolitions by Chinese authorities in the name of so-called Sinicization of religions and supported strong protests by priests against such demolitions.

NEXT: British lawmaker’s death ‘a painful loss in so many lives,’ says cardinal