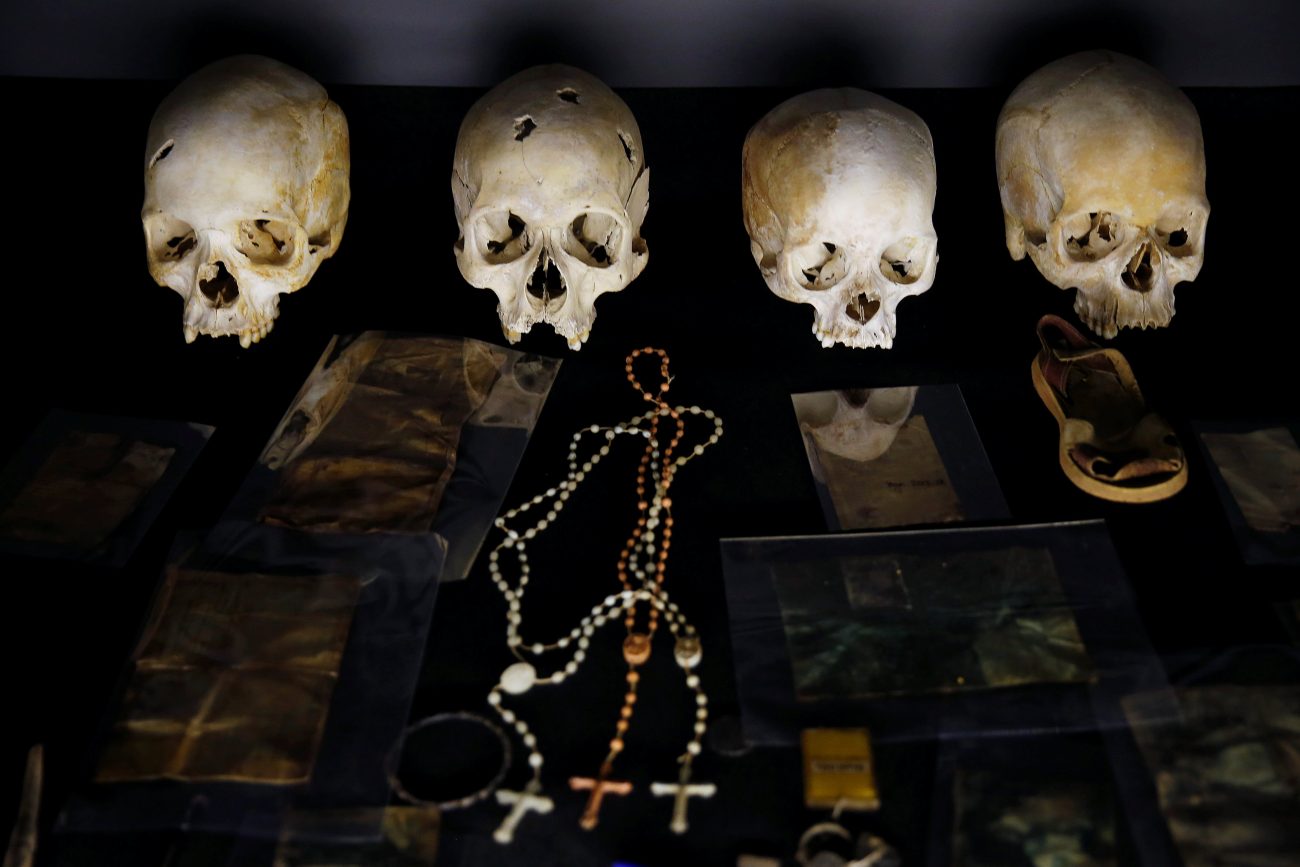 Skulls, rosaries, and personal items of victims of the Rwandan genocide are pictured as part of a display at the Genocide Memorial in Kigali April 6, 2019. More than 27 years after the ethnic genocide in which some church leaders were found complicit, Catholic leaders in Rwanda have intensified a campaign to reconcile Hutus and Tutsis. (CNS photo/Baz Ratner, Reuters)

As she sold dried fish from her stand at the Kimironko market in Kigali, Rwanda, Therese Mukabunane narrated how hundreds of desperate residents in her hometown of Gikongoro died at the hands of priests and nuns during the 1994 genocide in which more than 800,000 Tutsis and moderate Hutus were slaughtered by Hutu extremists.

“The priests, who were ethnic Hutus, referred to us as cockroaches and denied us food and water,” said the 52-year-old mother of four, who is a Tutsi. “They handed people who had taken refuge at their parishes to Hutu extremists so that they could be slaughtered. Some of us were lucky not to be murdered, but we were raped and seriously injured.”

“I no longer trust priests and other leaders of the church,” said Mukabunane, who was born and raised Catholic. “They abandoned us when we needed them the most. Their words were full of hatred. They had no respect for human life.”

Besides killing hundreds of thousands, the Rwandan genocide strained the relationship between the Rwandan government and the Vatican. In 2016, the country’s bishops apologized for priests’ role in the genocide, and Pope Francis asked forgiveness in 2017.

But 27 years later, the Catholic Church in the East African nation has intensified its campaign to preach peace and help victims of genocide and reconcile Hutus and Tutsis.

Cardinal Antoine Kambanda of Kigali, whose family was killed during the genocide while he was in Rome studying, said the church has initiated dialogues where communities are allowed to express their grievances, forgive each other and reconcile as a way of healing as well as building relationships.

“A lot happened during this genocidal period, and it requires the grace of our Lord Jesus Christ marked by forgiveness and mercy to rebuild our country,” the cardinal said in late July. “The church must continue to preach peace and reconciliation to enhance peaceful coexistence among communities.”

In Nyamata parish, about 20 miles south of Kigali, where some 50,000 people died during the genocide, Father Emmanuel Nsengiyumva offers counseling programs and a nine-month program on reconciliation. Perpetrators are allowed to acknowledge their evilness and ask survivors and victims for forgiveness, he said, adding that the survivors are encouraged to forgive and welcome perpetrators into their communities.

“We want to free people so that they can live in peace and love each other,” said Father Nsengiyumva, who was just 18 years old when the massacre began. He said he lost two of his brothers. “We are seeking to make all perpetrators and survivors of the genocide who had lost hope and their dreams shattered regain it.”

Some parishes are helping genocide survivors, especially women and their children, by starting small businesses for women and helping children gain access education.

Catechist Jose Ishimwe of Gikongoro Diocese said every Sunday during Mass, priests spend some of their homilies preaching about peace and reconciliation. He said priests have been visiting the families of the victims and survivors to support them emotionally, psychologically, spiritually and financially.

Ishimwe said the aim of the outreach has always been to improve the image of the church, since many who sought refuge in Catholic parishes during the genocide lost trust and left the church for other Christian denominations. As a result, since the late 1990s, the church’s population has dropped from more than 50% to 43% of the Rwandan population.

However, Ishimwe noted that more than 200 priests and nuns are reported to have been massacred trying to save Tutsis.

“We will never allow the genocide to happen again in our country,” said Ishimwe, who escaped the killing and took refuge in Burundi before returning in 1998. “We have forgiven each other through reconciliation and moved on. Through the Gospel of Jesus Christ, we have turned enemies into friends, and they now live side by side and help each other as neighbors.”

Diane Munezero, a 48-year-old mother of three who survived the genocide by hiding in the bush for several weeks before being rescued by soldiers from the Rwandan Patriotic Front, told Catholic News Service: “We are happy as survivors because the church has taken the responsibility of the role they played during the massacre. They are now talking about it and reconciling people. It brings healing in our hearts, and we are now able to forgive the church and the priests who took part in the massacre.”

Some Rwandans, however, cannot forgive. Survivors have continually accused the Vatican of helping some of the priests and nuns evade justice by giving them asylum in European countries.

Some remain angry that the Vatican promoted Bishop Thaddée Ntihinyurwa to archbishop of Kigali in 1996, despite accusations that he ordered at least 600 people out of a parish and led them to a football stadium, where Hutu militiamen slaughtered them. Yet as Kigali archbishop, he was instrumental in allowing discussion on reconciliation and ethnic tensions in preparation for the Jubilee Year 2000. A Rwandan gacaca tribunal on the genocide questioned Archbishop Ntihinyurwa in 2005. He retired in 2018.

PREVIOUS: Seal of confession a topic of debate after French abuse report

NEXT: Retired Chinese bishop who spent years in labor camps dies at 98