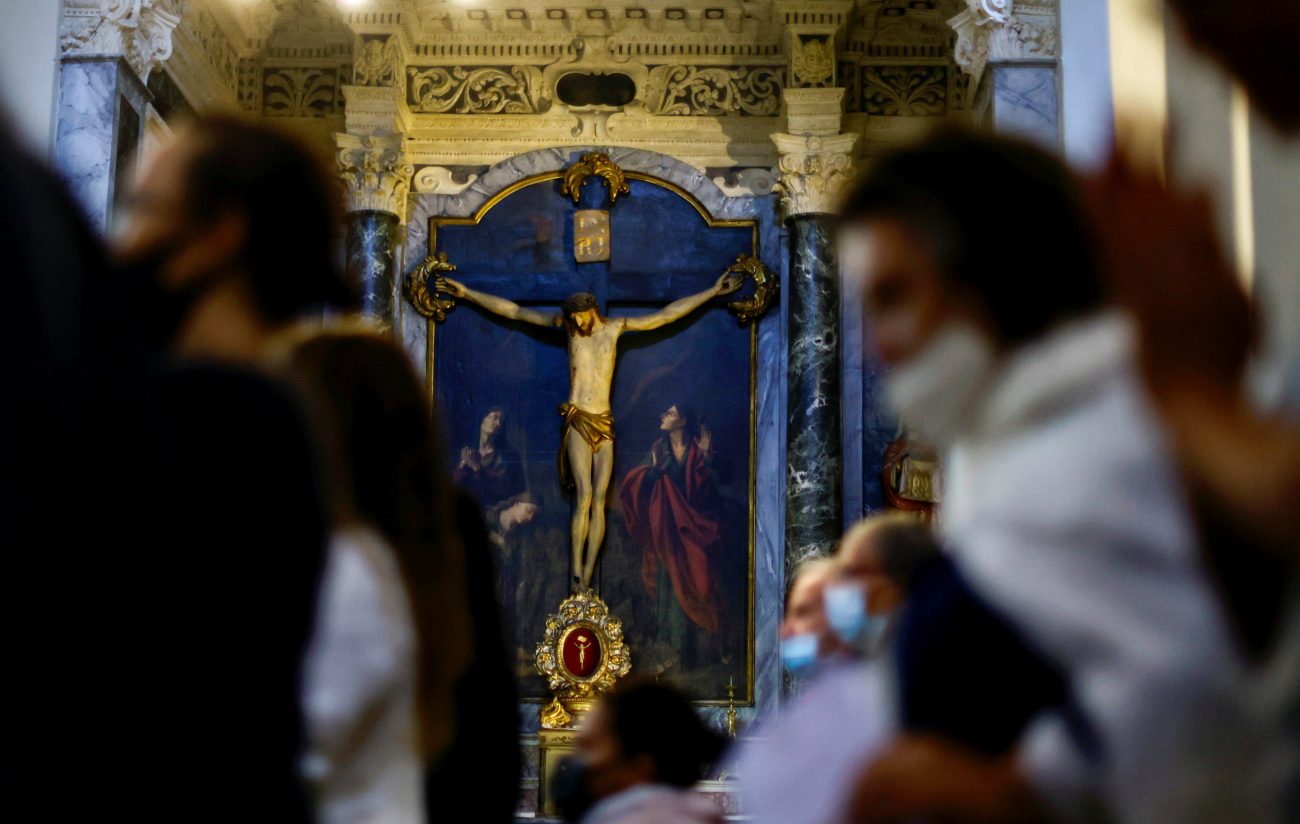 A crucifix is seen as people pray during a Mass at the cathedral in Nice, France, Oct. 10, 2021. The French bishops' conference said it would work on necessary "measures and reforms" after a recent report from an independent commission estimated 330,000 children had been abused by Catholic priests or church employees in France since the 1950s (CNS photo/Eric Gaillard, Reuters)

PARIS (CNS) — Church and government leaders in France are at odds over whether priests should be required to report the abuse of minors if they learn about it in the sacrament of confession.

Archbishop Eric de Moulins-Beaufort, president of the French bishops’ conference, and Interior Minister Gérald Darmanin met to discuss the issue Oct. 12, a week after the release of a report by an independent commission that estimated 330,000 children had been abused by Catholic priests or church employees in France since the 1950s.

At issue is whether French law takes precedence over the seal of confession, a sacred practice in which a confessor does not reveal what is told to him during a confession.

One of the recommendations in the commission’s report urged the church to “send a clear message from the church authorities to penitents taking confession and to the faithful that the seal of confession may not derogate from the obligation provided for by the (French) Criminal Code … to report to the judicial and administrative authorities all cases of sexual violence inflicted on a child or a vulnerable person.”

Darmanin told legislators Oct. 12 that he had reaffirmed “the primacy of French laws” during his meeting with the archbishop and said Catholic confessional secrecy could not be “used as a justification for not denouncing sexual crimes against children.”

“The secret of confession has operated for 200 years in our law and is recognized as a professional secret, as with doctors and lawyers — but there is an exception for crimes committed against children under age 15,” added the interior minister, who also heads the government’s department for religions.

After the meeting, the French bishops’ conference issued a statement saying: “The scale of violence and sexual assault on minors revealed by this report requires the church to reexamine its practices in light of reality. Work is therefore needed to reconcile the nature of confession with the necessity of protecting children.” The bishops’ conference said it would work on necessary “measures and reforms” in line with the report’s recommendations at its upcoming Nov. 3-8 plenary.

In a note approved by Pope Francis and published by the Vatican in mid-2019, the Apostolic Penitentiary affirmed the absolute secrecy of everything said in confession and called on priests to defend it at all costs, even at the cost of their lives.

Just after the commission’s report was released, Archbishop de Moulins-Beaufort told France Info public radio that confessional secrecy opened up “a space of free speech before God” and should be considered “stronger than the laws of the republic.” After his remarks drew angry reaction from government officials and the media, the archbishop said he recognized his interview remarks had been “clumsy” and apologized to “victims and those saddened or shocked” by the subsequent controversy.

Pope Francis described the report’s publication as a “moment of shame” at his Oct. 6 Rome general audience. He is to meet Darmanin and French Prime Minister Jean Castex in Rome Oct. 18.