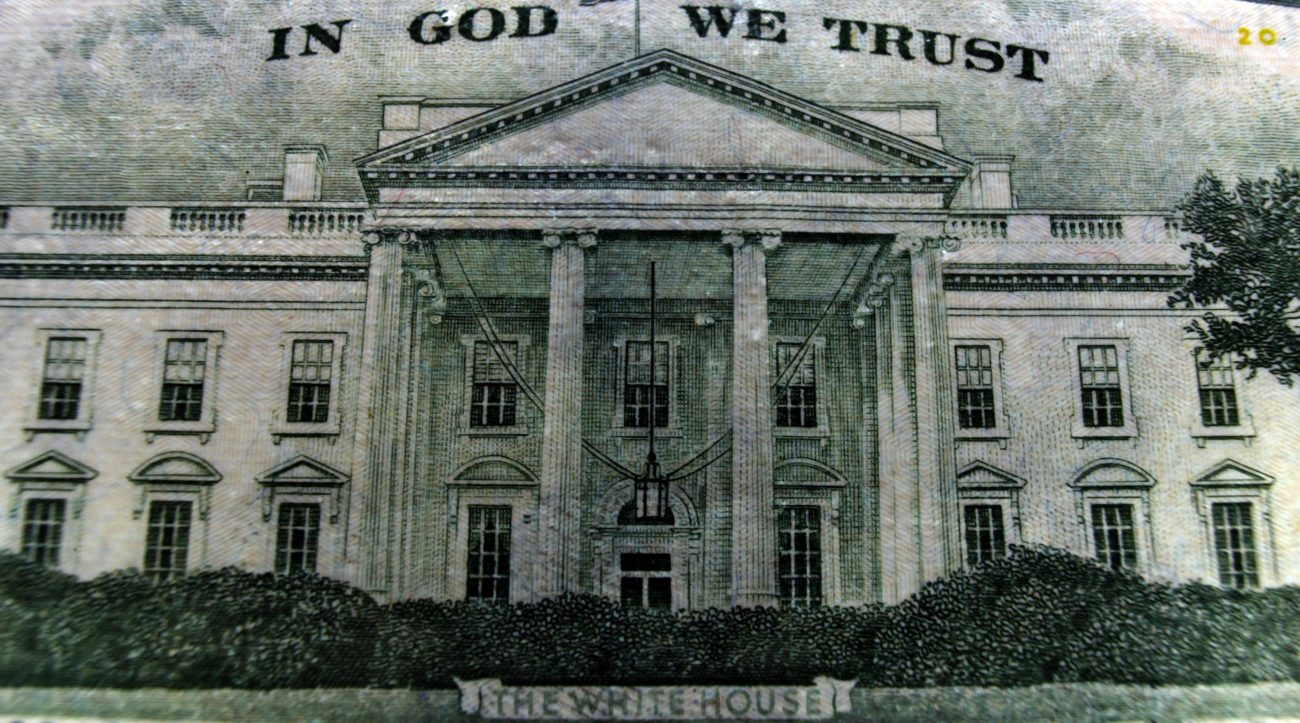 A detail of a U.S. $20 banknote is seen in this photo illustration. (CNS photo/Pawel Kopczynski, Reuters)

WASHINGTON (CNS) — The U.S. bishops’ pastoral letter “Economic Justice for All” turned 35 years old in November, but in the view of some panelists at a Nov. 22 forum on the pastoral’s anniversary, its release seems like much longer ago.

“These issues are still with us today — the poverty issues, the unemployment issues, and it touched the Black community and the immigrant community in very important ways,” said Jesuit Father David Hollenbach, who served as a consultant to a committee of bishops charged with drafting the letter.

Yet to be addressed, he added, are “the problems that are being faced today by working-class people today in the United States.”

“The last 35 years have been dominated, unfortunately by anti-labor legislation in the United States,” said Meghan Clark, a theology professor at St. John’s University in Jamaica, New York, and herself a union member, during the forum.

“Anniversaries come and go, and we don’t see much attention officially in the United States from the USCCB (U.S. Conference of Catholic Bishops),” Clark said. One exception, she noted was a joint document with the Catholic Health Association on the rights and responsibilities of union members and employers at Catholic healthcare institutions.

What distresses Clark, she said, is the burdens placed on “domestic workers, farmworkers, child care aides, and so many others whose experience have been highlighted by the pandemic and still don’t have a seat at the table.”

“The effort by the bishops (in crafting ‘Economic Justice for All’) was immense, but considering their content, I believe that more voices of people who were directly affected need to be in conversations such as this,” said panelist Roxana Bendezú, executive director of Migrant Roots Media and program director at Pax Christi USA. “The people directly affected should be the ones writing the analyses for circulation.”

In five parts, “Economic Justice for All: Pastoral Letter on Catholic Social Teaching and the U.S. Economy” looked at the church’s vision of economic life, beginning with a discussion of Christian principles and their role in economic matters. It offered proposals for employment, poverty, food and agriculture, and international development; outlined a “New American Experiment” and a “Partnership for the Common Good.”

Father Hollenbach detailed the prep work in writing the pastoral — which was originally intended to be a statement on capitalism, as the U.S. bishops had recently approved a statement on Marxism.

Two of the concerns bishops on the committee voiced were the Reagan administration “adopting a very strongly free market” yet “not worrying much about unemployment. The unemployment rate in the United States was very high,” Father Hollenbach said. They decided to focus on poverty and unemployment, adding agriculture later.

Consultation was extensive from labor unions to Catholic conservatives Michael Novak and former treasury secretary William Simon — who wrote their own statement, “Toward the Future,” voicing their objections to a published first draft of the pastoral in 1984. Father Hollenbach said the first draft appeared as the top front-page story in the next day’s New York Times.

“The meaning of the term ‘justice,’ of course, is highly debated,” going as far back as Plato,” he added. “Justice is a very complex idea and it’s been very much disputed through Western and world thought.” But what the bishops chose for the pastoral letter was “a strongly social orientation to what justice means.”

Father Hollenbach said the bishops are “very strong in their support for the labor movement in their document.” It defines labor as “an expression of my dignity, but it also enable me to acquire the resources” to participate fully in the economy. “Economic Justice for All” also contained an “option for the poor,” he added. “It’s a concern about responding to the needs of those who are left out, or excluded in ways that help them become poor.”

Clark traced the development of Catholic social teaching since the pastoral was issued.

“Shortly before ‘Economic Justice for All,’ (St.) John Paul (II) released ‘Laborem Exercens’ (‘Through Work’) attempting to show more of a theology of work,” she said.

“What is often overlooked because he sits between two giant impacts, between John Paul II and (Pope) Francis,” she said, is Pope Benedict XVI’s 2009 encyclical “Caritas in Veritate” (“Charity in Truth”). It “has much to say on economic justice and labor,” she added, especially with regard to “exclusion and marginalization, and specifically the right to unionization.”

Clark said, “Benedict XVI spoke to this attack on workers’ right to organize in ‘Caritas in Veritiate.’ … At the root of the problem for Benedict is that work is not being given significant value.”

Pope Francis met Italian labor unions in 2017, Clark said, and he told them: “There is no great society without a great union.” The current pope also spoke to the International Labor Organization, to whom he “decried the lack of benefits” given workers, she added. “He said once more that workers have a fundamental rights to organize.”

Bendezú urged “going back to the roots.” In her own remarks, she went as far back as Pope Nicholas V, whom she said granted the Portuguese a monopoly on trade with Africa — and permitted the enslavement of Africans.

“Who are the people were displaced to begin with?” Bendezú asked. “Look at the people who are facing the consequences right now.”

Bendezú cited her own Andean ancestry, saying her ancestors thought “the imposition” of Catholicism “was a matter of life or death, right? You either accept it, or you die.”

She added, “The only way to move forward is to recognize that what those people brought was not Christianity. … It was not the story of Jesus. I reject that.”

Rather, she said she embraces “the Jesus who was a refugee, the Jesus who came from what we would call now a working-class family, who kicked out the money lenders from the temple.”

A new “Economic Justice for All” is not likely to happen soon, Father Hollenbach said. “These documents made then-Cardinal (Joseph) Ratzinger (then head of the Vatican Congregation for the Doctrine of the Faith and later Pope Benedict XVI) very nervous.

“He was very worried that the American bishops and the Brazilian bishops were becoming too vocal on their own and not simply following the leadership of the Vatican. He thought this was a decentralizing movement of the church.”

To address this, “the people who were being appointed bishops changed dramatically,” he said — a change already underway by the time of writing of the pastoral.

Also, he said, Cardinal Ratzinger “took away the power of bishops” as a conference to issue a teaching document. In 1983, the cardinal issued a statement saying bishops’ conferences on their own do not have “mandatum docendi,” or teaching authority, to issue such a document.

The “Economic Justice for All” anniversary also gave panelists an opportunity to comment on recent church news.

Without naming him, two panelists criticized remarks about “woke” movements Archbishop José H. Gomez of Los Angeles, USCCB president, made earlier in November in a videotaped address to a Catholic conference in Madrid.

The archbishop spoke on “the rise of new secular ideologies and movements for social change in the United States and the implications for the Catholic Church.”

Without mentioning any group in particular, he said the church must proclaim Jesus Christ “boldly” and “creatively” in the face of new secular movements that promote “social justice,” “wokeness” and “intersectionality,” among other beliefs, as the answer to all of society’s ills.

“Let’s get the elephant out of the room,” panelist Bendezú said. “Having leaders who are speaking against movements, the Black Lives Matter movement, ‘woke people,’ whatever the term these days is, instead of marching with us, in the street, instead of organizing in spaces such as this, instead of really coming out to support what people on the ground are doing. Instead, in Europe they’re speaking against it. It’s so embarrassing, honestly.”

“It’s directly contradictory to what the pastoral on ‘Economic Justice for All’ stood for,” Father Hollenbach said. “Not just deviation, but contradiction. It’s a very unfortunate speech.”