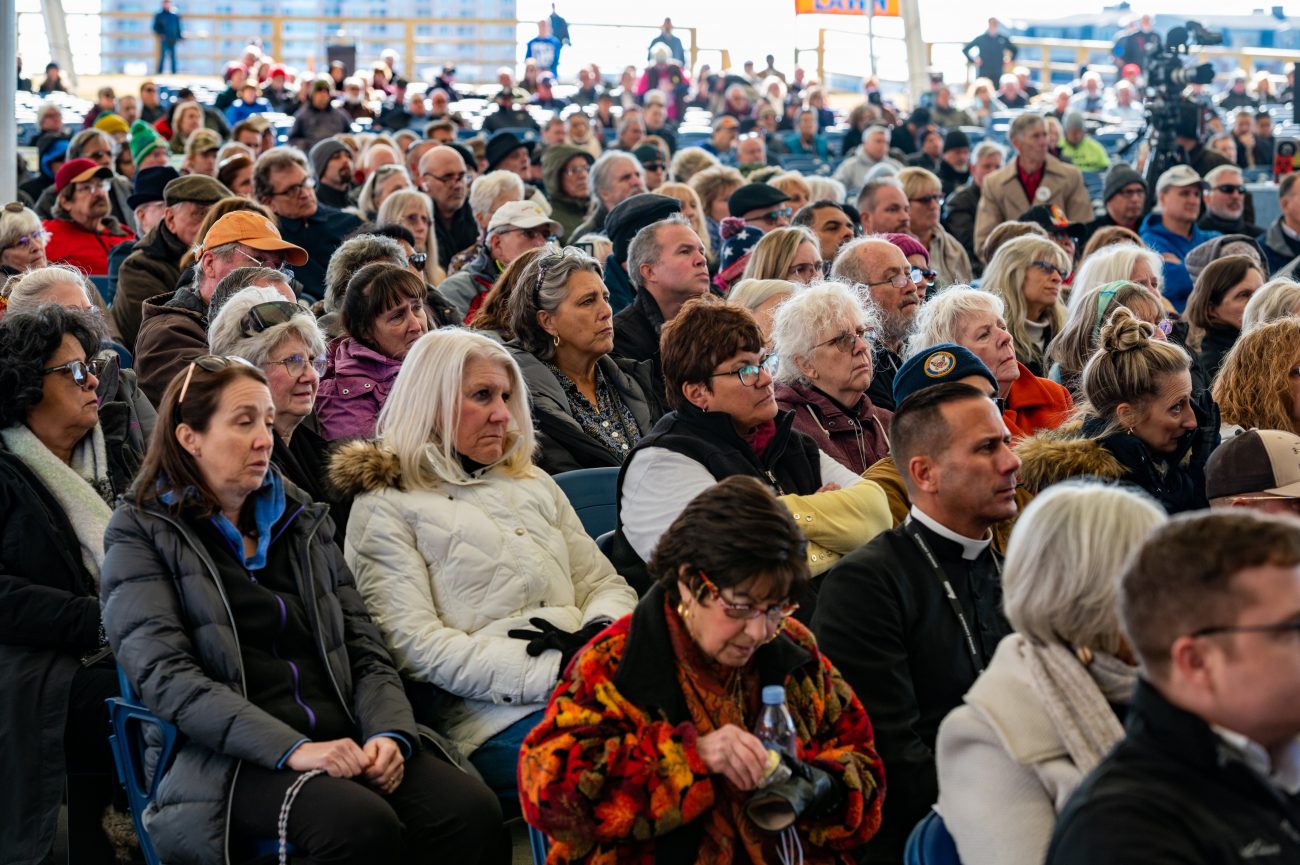 Church Militant supporters listen to presentations Nov. 16, 2021, at a rally in Baltimore near the hotel where the U.S. Conference of Catholic Bishops was holding its fall general assembly Nov. 15-18. (CNS photo/Kevin J. Parks, Catholic Review)

BALTIMORE (CNS) — As more than 200 U.S. bishops met at the Marriott Baltimore Waterfront hotel Nov. 16, the second day of the Nov. 15-18 fall general assembly of the U.S. Conference of Catholic Bishops, a series of speakers castigated them from across the street at a waterfront pavilion.

They were addressing a rally sponsored by St. Michael’s Media, also known as Church Militant.

The Michigan-based outlet won a legal battle with the city of Baltimore to allow the “Bishops: Enough Is Enough” rally to take place after the city argued that the event posed a public safety threat with a speaker lineup that included far-right polemicist Milo Yiannopoulos.

Cheered on by an audience of more than 1,300 with others watching via livestream, several speakers alleged the bishops are complicit in the cover-up of clergy sexual abuse and other misdeeds.

They asserted the bishops should not allow Communion for Catholic politicians who want to maintain a legal right to abortion. They also demanded the bishops take a stronger stand against abortion.

Gesturing to the third floor of the hotel where the bishops were meeting, Michael Voris, founder of Church Militant, told the crowd that the rally and an associated conference were grounded in prayer for the bishops. 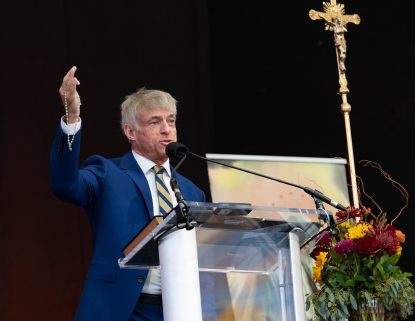 Michael Voris, founder of Church Militant, leads the praying of the rosary in Baltimore Nov. 16, 2021, during the organization’s rally near the hotel where the U.S. Conference of Catholic Bishops was holding its fall general assembly Nov. 15-18. (CNS photo/Kevin J. Parks, Catholic Review)

“Many of them are blinded to the truth,” he asserted. “Many of them are malformed. They grew up in seminary, many of them during the age of the sexual revolution. They have their faith distorted, their catechism blurred. And now they and we are suffering the effects of that.”

Voris said his prayer is that the bishops will “come to see the light.”

Jim Havens, one of the organizers of the National Men’s March to End Abortion that took place Nov. 15 in Baltimore, told the crowd the church is suffering “grave corruption.”

Havens added: “We care about souls; yours and those entrusted to you, which is why we must call out your sacrilegious abuse of the sacred offices.”

He demanded the bishops enforce Canon 915, a section of church law that rally organizers said calls for clergy to deny Communion to Catholic politicians who want to keep abortion legal.

The canon says, “Those who have been excommunicated or interdicted after the imposition or declaration of the penalty and others obstinately persevering in manifest grave sin are not to be admitted to holy Communion.”

In September, Pope Francis called abortion “homicide,” but also said he has never denied Communion to anyone. He urged what he called a more pastoral approach.

Havens asked, “Do you see the scandal that it is to the world that you bishops are not utilizing the full magnitude of your moral authority and influence to end this ongoing daily mass murder?”

“If you cannot stand up for natural law and for innocent children that are being mass murdered every day that which is knowable by reason alone – why would anyone listen to you on divine revelation on matters of faith? You have undermined the authority of your office with your foolishness and cowardice,” Havens said.

James Grein, a survivor of sexual abuse who said he was victimized by Theodore McCarrick, former cardinal and archbishop of Washington, recounted the pain he has endured over the years because of abuse.

“We were all white doves,” he said, referring to McCarrick’s victims. “And then this black bird named Theodore McCarrick came into our lives and really destroyed it.”

Grein, who said detectives and civil lawyers are conducting criminal investigations into some current bishops, alleged that in the past, McCarrick pressured him not to go public with his story because he would be “ruined” in the press.

“I’m not ruined in the press,” Grein said, “and I’m coming stronger than I’ve ever been before. And I will never, ever, ever give up. I can’t. And I can only do that because I have the love of my family.”

Father James Altman, who was removed from a Wisconsin parish by Bishop William P. Callahan of La Crosse, railed against the bishops.

Bishop Callahan removed Father Altman from his parish July 9; the pastor had stirred controversy since last fall when he criticized Catholic Democrats from the pulpit, saying they must “repent” because of the party’s support for legal abortion or “face the fires of hell.”

Prior to the removal, the Diocese of La Crosse issued a statement May 24 noting that Father Altman had made public Bishop Callahan’s request that he resign “as well as his intent to decline the request.”

Many of those attending the rally expressed concern about the state of the Catholic Church.

Sally Carey from Painesville, Ohio, held a sign proclaiming “Lost Shepherds lose sheep.” Others held signs with messages such as “Let your faith be stronger than your fear” and “Feed your sheep.”

“I love the church and I hate to see corruption at these levels,” said Sean Ledoux. “The job of the magisterium and the clergy is to be protectors of the faith, and that is something I have always loved about the faith.”

“I would like for them (USCCB) to open up their records,” he told the Catholic Review, the news outlet of the Archdiocese of Baltimore.

Mary Ledoux said she was concerned about the sexual abuse crisis and “all the covering up.”

Matysek is managing editor of the Catholic Review, the news outlet of the Archdiocese of Baltimore. Priscila González de Doran of the Review contributed to this story. 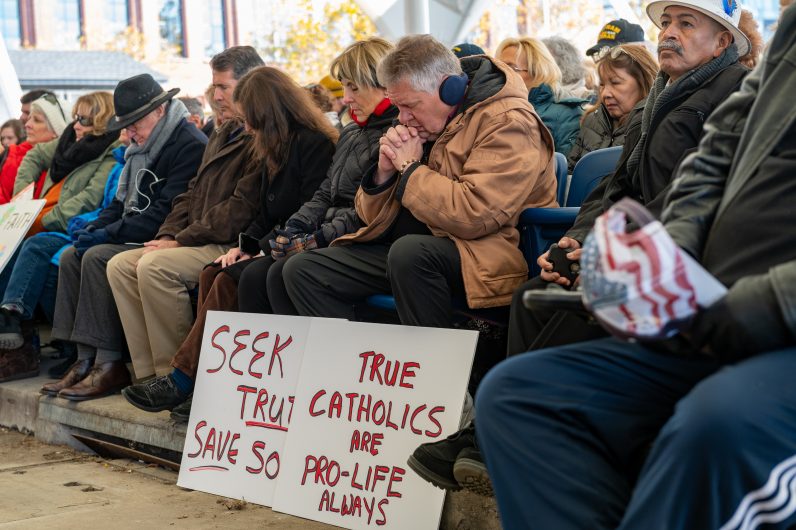 Bill Scheible of Ohio, center, bows his head in prayer during the Church Militant rally in Baltimore Nov. 16, 2021, near the hotel where the U.S. Conference of Catholic Bishops was holding its fall general assembly Nov. 15-18. (CNS photo/Kevin J. Parks, Catholic Review)