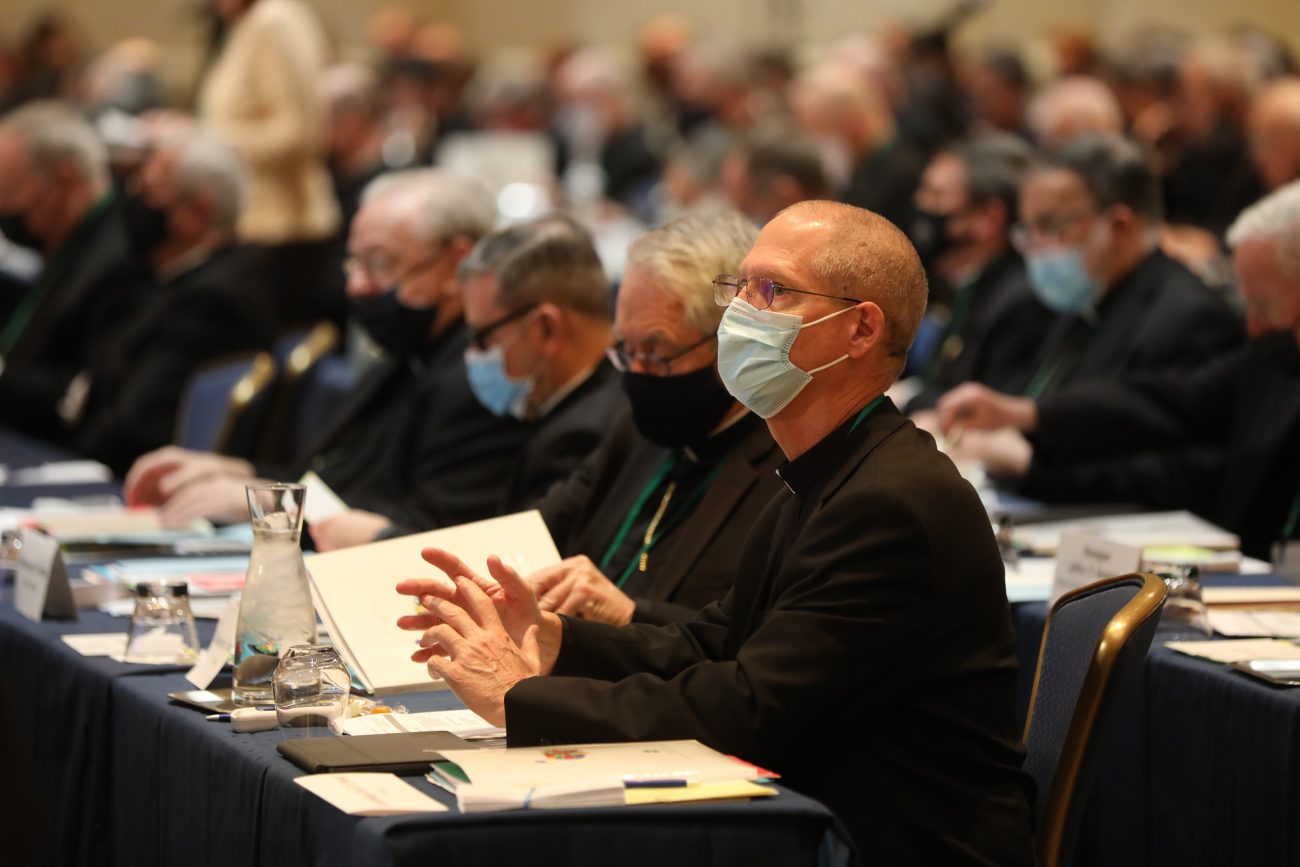 Archbishop Paul D. Etienne of Seattle, wearing a protective mask, right, attends a Nov. 16, 2021, session of the fall general assembly of the U.S. Conference of Catholic Bishops in Baltimore. Due to the COVID-19 pandemic, it is the first in-person bishops' meeting since 2019. (CNS photo/Bob Roller)

BALTIMORE (CNS) — The U.S. bishops, gathered for the first time in person since 2019, discussed the highly anticipated statement on the Eucharist without the heated discussion it stirred up in their previous meeting.

They also looked at diocesan financial reporting and considered new socially responsible investment guidelines, all while groups of protesters gathered outside the Baltimore hotel where the public sessions of the Nov. 15-18 meeting were taking place.

Bishop Kevin C. Rhoades of Fort Wayne-South Bend, Indiana, chairman of the bishops’ doctrine committee, presented the Communion document to the bishops Nov. 16 by saying it addresses the “fundamental doctrine about the Eucharist that the church needs to retrieve and revive.”

In the bishops’ virtual June gathering, a major focus had been whether the document would address denying Communion to Catholic politicians who support abortion. At the time, some bishops said a strong rebuke of President Joe Biden, the nation’s second Catholic president, should be included in it because of Biden’s recent actions protecting and expanding abortion access, while others warned that this would portray the bishops as a partisan force during a time of bitter political divisions across the country.

The document in front of the bishops during their general assembly in November does not specifically call out Catholic political leaders, but it does more generally point out the seriousness of the sacrament.

“One should not celebrate Mass or receive holy Communion in the state of mortal sin without having sought the sacrament of reconciliation and received absolution,” it says.

The short presentation to U.S. bishops, followed by just a handful of comments from the floor, stressed that the document was intended to be a theological contribution to the bishops’ strategic plan and to the bishops’ planned eucharistic revival by providing a doctrinal resource for parishes, catechists and the faithful.

The draft of the document explains the importance of Communion, often calling it a gift, and uses references from Scripture, prayers of the church and Second Vatican Council documents to back this up. It also explains, citing words of the saints, how Communion is not just a symbol but the real presence of Christ.

Prior to this presentation, the head of the bishops’ National Advisory Council stressed this proposed statement “cannot be partisan,” nor should it be made such “through calculated expression or calculated suppression of our doctrine and belief.”

“The Eucharist cannot be a tool for division, cannot be ideological,” said Mark Sadd of the Diocese of Wheeling-Charleston, West Virginia, who is chair of the council, in Nov. 16 remarks.

The meeting began with addresses from Archbishop Christophe Pierre, the apostolic nuncio to the United States, and Los Angeles Archbishop José H. Gomez, president of the U.S. Conference of Catholic Bishops.

Archbishop Gomez said the U.S. church today is called more than ever to carry out its centuries-long evangelizing mission at a time of spiritual awakening rising from “under the clouds of the pandemic” and the country’s uncertain future.

“People are starting to examine what they truly believe and what they value most deeply in their lives,” he added.

Archbishop Pierre spoke to the U.S. bishops about the importance of listening to people in the church and being open to the work of the Holy Spirit.

He addressed a topic fresh on the bishops’ minds from hearing about it the previous night at their opening Mass and one they will continue discussing in preparation for an upcoming world Synod of Bishops: synodality.

“I believe that synodality is an answer to the challenges of our time and to the confrontation which is threatening to divide this country and which also has its echoes in the church,” the nuncio said.

A draft document of guidelines governing the USCCB’s financial investments includes wider limits on where money would be invested and advances a policy of engagement on corporate practices that impact human dignity.

Bishop David J. Malloy of Rockford, Illinois, chairman of the USCCB’s Committee on International Justice and Peace, introduced the draft guidelines, saying they build upon the current investment policy the bishops adopted in 2003.

After the presentation, Bishop Robert W. McElroy of San Diego questioned why there was little mention of fossil fuels in the document, describing the section as being “weak,” given that the Vatican and Pope Francis have encouraged divestment from such energy sources as needed to slow climate change.

The bishops also considered a new resolution on diocesan financial reporting. They first approved such a resolution in 2000 in various years since. The 2016 resolution expires Dec. 31; the new one also is intended to be good for five years.

Also during the first day of public meetings, the bishops elected Father Michael J.K. Fuller, a priest of the Diocese of Rockford, Illinois, as the general secretary of the U.S. Conference of Catholic Bishops. He will serve a five-year term in the position.

He had been serving as interim general secretary since the July resignation of Msgr. Jeffrey D. Burrill, who stepped down after the USCCB learned of an impending media report accusing him of engaging in improper behavior.

In other voting, Bishop James. F. Checchio of Metuchen, New Jersey, is the new treasurer-elect of the USCCB. The bishops also voted for chairmen-elect for five standing committees:

The bishops also listened to a detailed recorded presentation by Archbishop Charles Scicluna of Malta about revisions to the Code of Canon Law on penal sanctions in the church. The archbishop is adjunct secretary of the Congregation for the Doctrine of the Faith and the Vatican’s top investigator of abuse cases.

He said the revisions to the law go into effect Dec. 8 and that it was important to see the sanctions as a way to show “the church’s maternal mercy.” Their purpose is mainly spiritual, he said, and they have to meet the demands of justice and seek reform of the perpetrator. They are acts of charity toward the church community, victims of crime, and perpetrators, he said, adding that the pope has strong words on this matter.

As the bishops met, some protests took place just outside their hotel or nearby.

A group of sex abuse survivors called on the bishops to focus less on who can take Communion and instead do more to end sex abuse and other abuses by clergy.

“We wanted to come here today on behalf of survivors, a group of survivors of sexual abuse who are committed to fighting for justice and to also highlight what’s not being talked about when they’re focused on the Eucharist,” said Sarah Pearson, a sex abuse survivor from Wisconsin who joined other members of the organization Ending Clergy Abuse.

The survivors also demanded the bishops condemn a group that was holding a rally nearby with some speakers claiming homosexuality is linked to pedophilia. The group called St. Michael’s Media, also known as Church Militant, featured a series of speakers who castigated the bishops from across the street at a waterfront pavilion.

Cheered on by an audience of more than 1,300 with others watching via livestream, several speakers alleged the bishops are complicit in the cover-up of clergy sexual abuse and other misdeeds. They asserted the bishops should not allow Communion for Catholic politicians who want to maintain a legal right to abortion. They also demanded the bishops take a stronger stand against abortion.

On Nov. 15, Catholic men from around the country gathered outside a Planned Parenthood clinic in downtown Baltimore to pray for an end to abortion, to repent for their role in abortion and to call on all men to defend unborn life. They then marched to the Baltimore Renaissance Hotel where the bishops were meeting to pray the rosary outside.

That evening, the bishops gathered for their opening Mass at the Basilica of the National Shrine of the Assumption of the Blessed Virgin. The bishops, masked and adequately spaced, along with some laypeople, filled the pews.

NEXT: ‘Enough is enough’ rally challenges U.S. bishops to ‘see the light’