Pilgrim’s path: Parsing what the president said the pope said 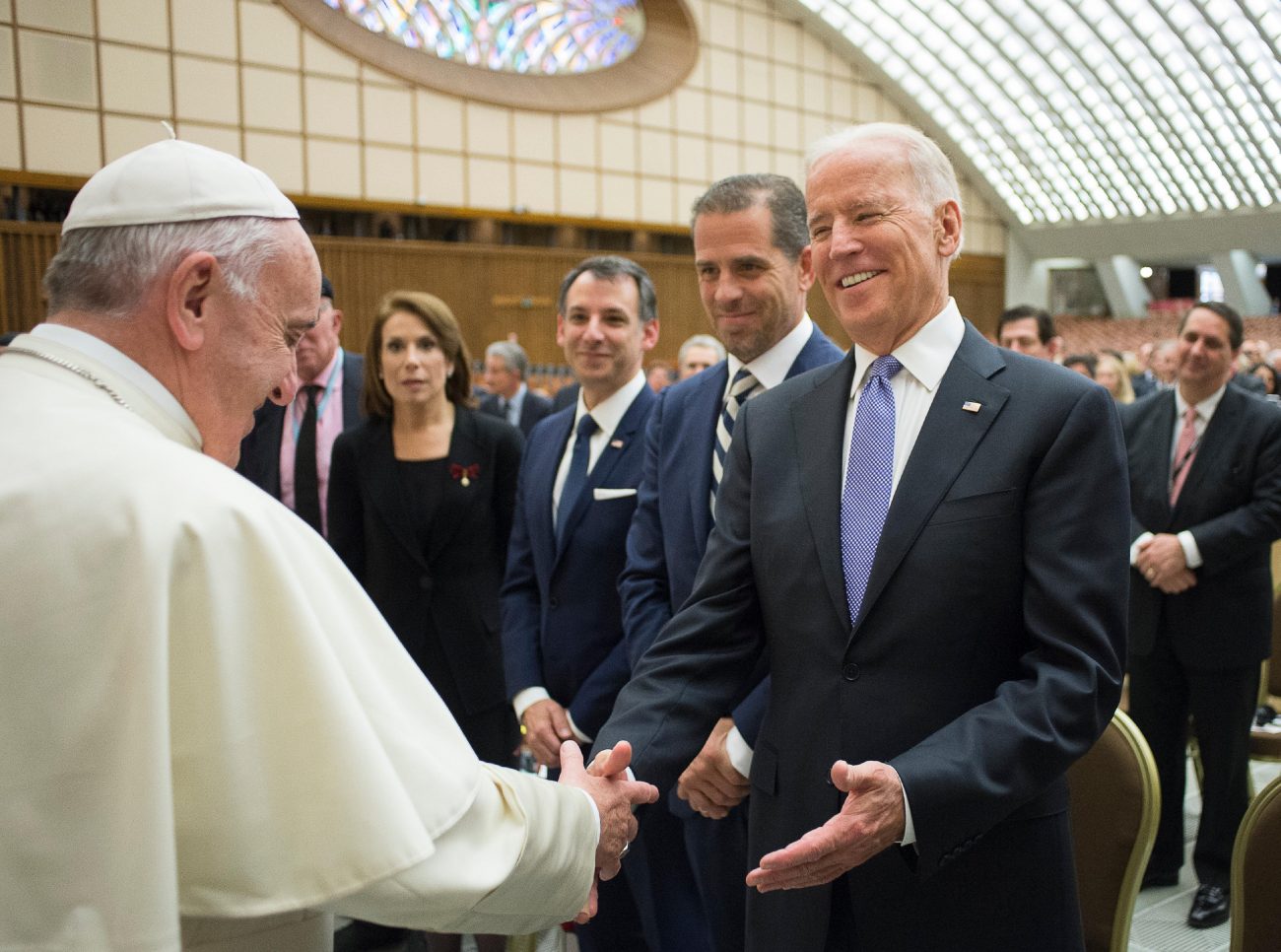 Pope Francis greets then-U.S. Vice President Joe Biden after both spoke at a conference on adult stem cell research at the Vatican April 29, 2016. In a recent interview, Archbishop Christophe Pierre, the Vatican ambassador to the U.S., said he is helping the Holy See prepare for Biden's first presidential visit to the Vatican, sometime during an Oct. 30-31 Rome summit of leading rich and developed nations. "It would be an anomaly if he did not meet the pope while in Rome," especially since Biden is the first Catholic president in 58 years, the nuncio said. (CNS photo/Vatican Media)

The painted 12-inch square tile depicts a pilgrim walking along the banks of the Tiber River toward the Vatican. But he is not there yet.

Pope Francis welcomed Biden to the Vatican Oct. 29, and the two met privately, assisted by two interpreters, for 75 minutes, a record for a papal audience with a head of state.

But for Biden, the pope chose the pilgrim.

As Pope Francis has made clear throughout his pontificate, defining someone as a good Catholic or a good Christian does not mean canonizing them or approving of everything they say and do. Rather, good Christians recognize they are sinners in need of God’s forgiveness and grace, and they are committed to continuing the journey.

After meeting the pope, a reporter asked Biden if he and the pope had discussed abortion. Biden said no, “we just talked about the fact he was happy that I was a good Catholic, and I should keep receiving Communion.”

Asked if the pope really said that, the Vatican press office — as is normal in such cases — declined to comment, saying the meeting was private.

The Vatican’s official statement on the topics the pope and his secretary of state discussed with Biden included climate change, religious freedom, migration, the COVID-19 pandemic and the promotion of peace.

The statement made no mention of abortion, Communion or the state of Biden’s soul.

The president’s meeting with the pope came just over two weeks before the U.S. bishops are set to discuss a document on the meaning of the Eucharist, which a few bishops have said should include specific language about what constitutes worthiness to receive Communion and how politicians who support legalized abortion are not worthy to receive.

It would be impossible to think Pope Francis did not know the Biden administration supports legalized abortion and perhaps even that Biden renounced his longtime support for the Hyde Amendment, which banned federal funding for most abortions.

Throughout his political career, Biden has acknowledged the tensions between the Democratic Party and the Catholic Church over abortion, which the church sees as the taking of an innocent human life.

But the president also must have seen the comments Pope Francis made recently when asked specifically about the question of giving Communion to Catholic politicians who support abortion.

But the question about giving Communion is not theological; it’s pastoral, he said.

“Communion is not a prize for the perfect,” but rather “a gift, the presence of Jesus in his church and in the community. That is the theology,” he said.

“If we look at the history of the church, we see that every time bishops have not managed a problem as pastors, they have taken sides on political life, on the political problem. In not handling a problem well, they took sides politically.”

Archbishop William E. Lori of Baltimore, the incoming chair of the U.S. bishops’ pro-life committee and a consultant to the U.S. bishops’ doctrinal committee, which drafted the statement on the Eucharist, told Catholic News Service that he believes the document will be pastoral.

“I think it would be a beautiful thing if, in November, we were to close ranks and say, ‘We are pastors. We love our people. We want to make this an inviting church and we want to gather people around the altar of the Lord,'” he told CNS in late October.

While teaching the truth and upholding the sacred dignity of all human life, “the church is called to be the great sacrament of salvation and the great sacrament of unity. And if ever there were a time we needed to live up to that deeply theological description of what the church is, it’s right now in our polarized culture,” Archbishop Lori said. “So we have to be careful of not allowing ourselves to go down no exit, partisan alleys where there is no life at the end of it, no evangelical life, no spiritual fruit.”