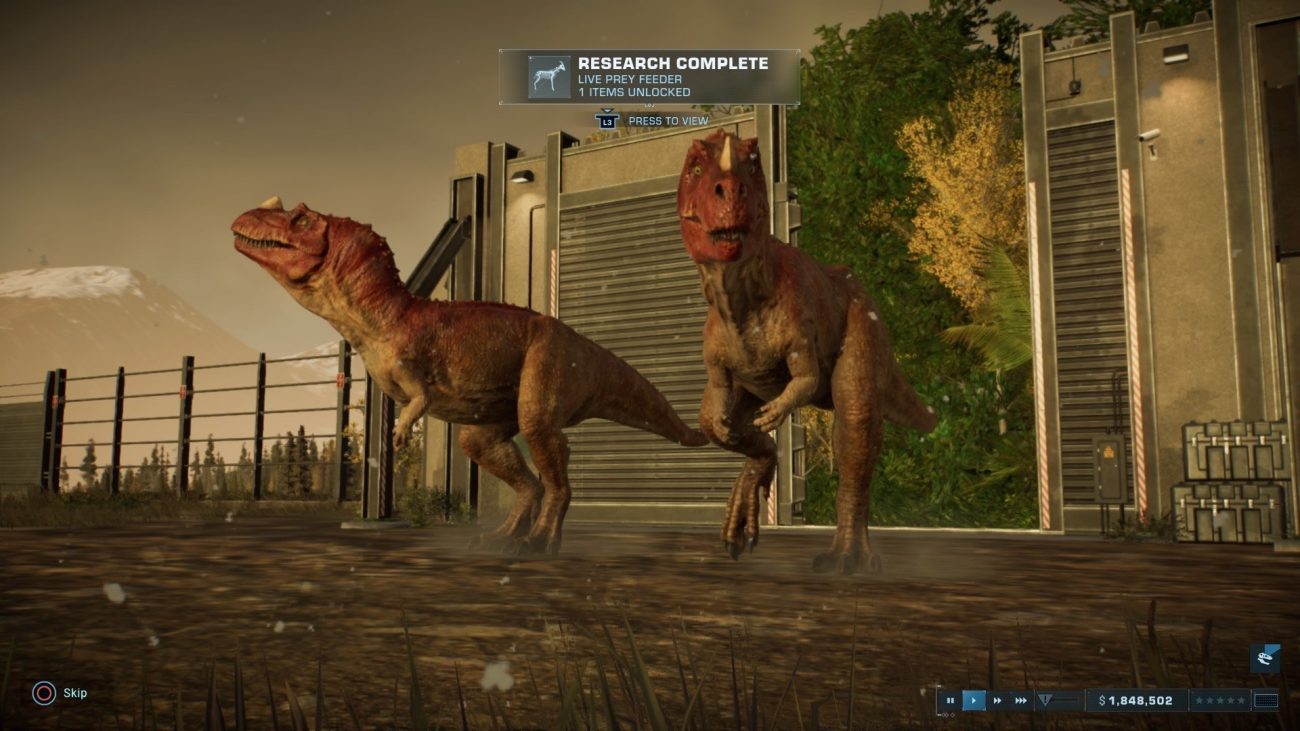 This is a scene from the video game "Jurassic World Evolution 2." The Catholic News Service classification is A-II -- adults and adolescents. The Entertainment Software Rating Board rating is T -- teens. (CNS photo/Frontier Developments)

While the graphics are relatively tame, the objectives are demanding, making the game too complex for little kids, though it’s suitable for all others.

Whereas the first iteration took place on a mysterious archipelago, the sequel transpires in North America after the events of the 2018 film “Jurassic World: Fallen Kingdom,” in which a band of prehistoric predators escaped into the world. This allows for new challenges in the different biomes of California, Oregon and even the nation’s capital.

There are several modes, including a campaign story inspired by “Fallen Kingdom” and a “chaos theory” scenario which revisits key moments from throughout the franchise’s history. Various characters from the books and movies make an appearance to help gamers, including former park operations manager Claire Dearing (voice of Bryce Dallas Howard) and mathematician Dr. Ian Malcolm (voice of Jeff Goldblum).

Players can create over 75 different species from DNA acquired on fossil expeditions — dinos, pterosaurs and various kinds of marine life among them. This is in addition to those creatures that can be caught in the wild. Various resort amenities also are available to build, including amusement rides, gift shops and restaurants.

Along with founding a successful business, gamers must ensure that the parks they establish run smoothly. If animals are not placed in the correct habitats with appropriate resources, for instance, they may end up competing against each other — with deadly results.

Disgruntled employees, moreover, may sabotage the workplace, allowing outsized critters to run amok. Even so, whether the beasts are chowing down on each other or on visitors, only minimal gore is depicted.

Guests’ needs also must be managed effectively. Otherwise, unhappiness among patrons will cause sales to plummet.

Additionally, staff management is a major concern — more so than in the previous game. Thus players must recruit not only scientists and research teams but park rangers and veterinarians as well.

Another upgrade over the last title involves the increased complexity of the artificial intelligence controlling animal behavior. They interact with each other more, hunting in packs, for example, which enhances the sense of realism.

PREVIOUS: ‘West Side Story’ a ‘splendid’ update of a timeless tale

NEXT: Nun’s life experiences in poetry lead readers to reflect on own lives