Our Lady of Fatima statue near national shrine in Washington vandalized 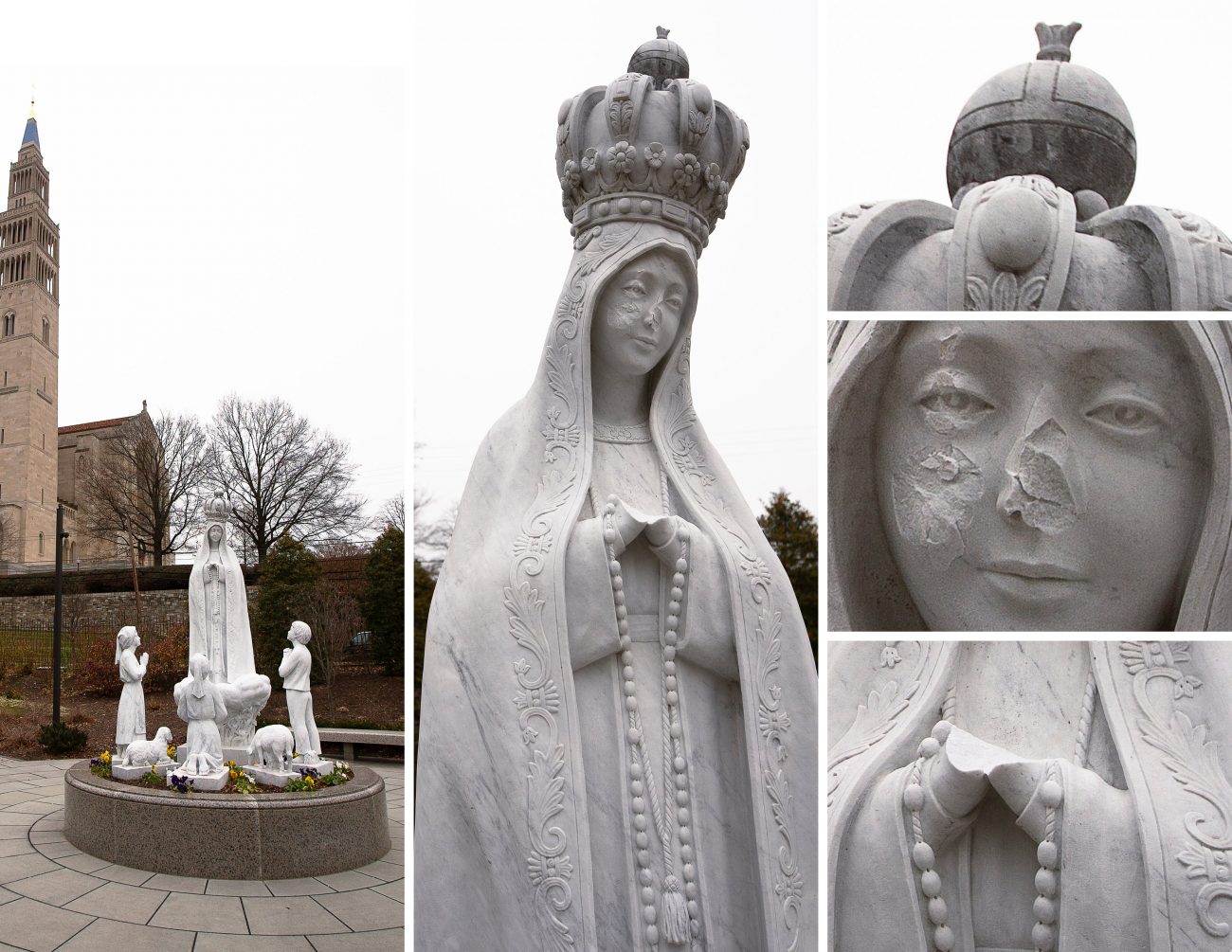 A composite photo shows damage to a statue of Our Lady of Fatima that stands with the three shepherd children near the Basilica of the National Shrine of the Immaculate Conception in Washington Dec. 8, 2021. The hands and nose of the statue of Mary were cut off and the cross on her crown was broken off. Shrine officials said that around 10:45 p.m. Dec. 5, the perpetrator got to the statue by climbing a locked fence that surrounds a rosary walk and garden that includes the statue. (CNS composite; photos by Tyler Orsburn)

WASHINGTON (CNS) — Days ahead of a major Marian feast day in the Catholic Church, a marble statue of Our Lady of Fatima near the Basilica of the National Shrine of the Immaculate Conception in Washington was vandalized, with Mary’s hands and nose cut off, her face scratched and the cross on her crown broken off.

On Dec. 8, the feast of the Immaculate Conception, a spokesman at the national shrine told Catholic News Service that around 10:45 p.m. Dec. 5, the perpetrator got to the statue by climbing a locked fence that surrounds a rosary walk and garden that includes the statue.

Video footage showed a masked person doing the damage, which was discovered the next morning. Police were investigating the vandalism.

“Though we are deeply pained by this incident, we pray for the perpetrator through the intercession of the Blessed Virgin Mary under her title of Our Lady of Fatima,” Msgr. Walter Rossi, rector of the national shrine, said in a statement.

The Fatima statue and the garden around it were completed in 2017, the 100th anniversary of Mary’s appearances to three shepherd children in a field near Fatima, Portugal, with her message that eucharistic prayer, recitation of the rosary and penance would save souls and bring peace to the world.

One on side of the national shrine’s garden is the white Carrara marble sculpture of Our Lady of Fatima with the three child-visionaries at her feet, Lucia dos Santos and Jacinta and Francisco Marto. On the opposite side is the crucified Christ, sculpted from the same kind of marble.

A paved walkway, symbolic of the thread connecting a rosary’s beads, circles through and around the garden, taking visitors past groupings of colorful mosaics that illustrate the 20 mysteries of the rosary.

On Sept. 23, 2017, Bishop Frank J. Caggiano of Bridgeport, Connecticut, blessed the new garden, walking to the Fatima statue, then around the path.

The blessing followed a Mass the bishop and other clergy concelebrated in the national shrine’s Upper Church for 2,000 pilgrims from the Diocese of Bridgeport, along with pilgrims from the Philippines and China, the New York area and the Washington region.

Our Lady of Fatima’s message about prayer, conversion and peace that she imparted in 1917 “is as important now as it has ever been since,” Bishop Caggiano said in his homily.

“We come here to ask for her intercession,” he said. “She might lead every human heart to answer the question, ‘What is it that you are looking for?’ And we will answer it: ‘We are looking for your Son, and lead us to him.'”

Four years later, the attack on the national shrine’s statue of Our Lady of Fatima became one of the latest attacks in dozens of incidents of arson, vandalism and other destruction that have taken place at Catholic sites across the United States since May 2020.

In an Oct. 14, 2021, news release, the U.S. Conference of Catholic Bishops said the bishops’ Committee for Religious Liberty began tracking such incidents that May and by the time the release was issued, there had been 100 such incidents.

“These incidents of vandalism have ranged from the tragic to the obscene, from the transparent to the inexplicable,” the chairmen of the USCCB’s religious liberty and domestic policy committees said in a joint statement included in the release.

“There remains much we do not know about this phenomenon, but at a minimum, they underscore that our society is in sore need of God’s grace,” they said, calling on the nation’s elected officials “to step forward and condemn these attacks.”

“Where the motive was retribution for some past fault of ours, we must reconcile; where misunderstanding of our teachings has caused anger toward us, we must offer clarity; but this destruction must stop. This is not the way,” they said.

“We thank our law enforcement for investigating these incidents and taking appropriate steps to prevent further harm,” Cardinal Dolan and Archbishop Coakley said. “We appeal to community members for help as well. These are not mere property crimes — this is the degradation of visible representations of our Catholic faith. These are acts of hate.”