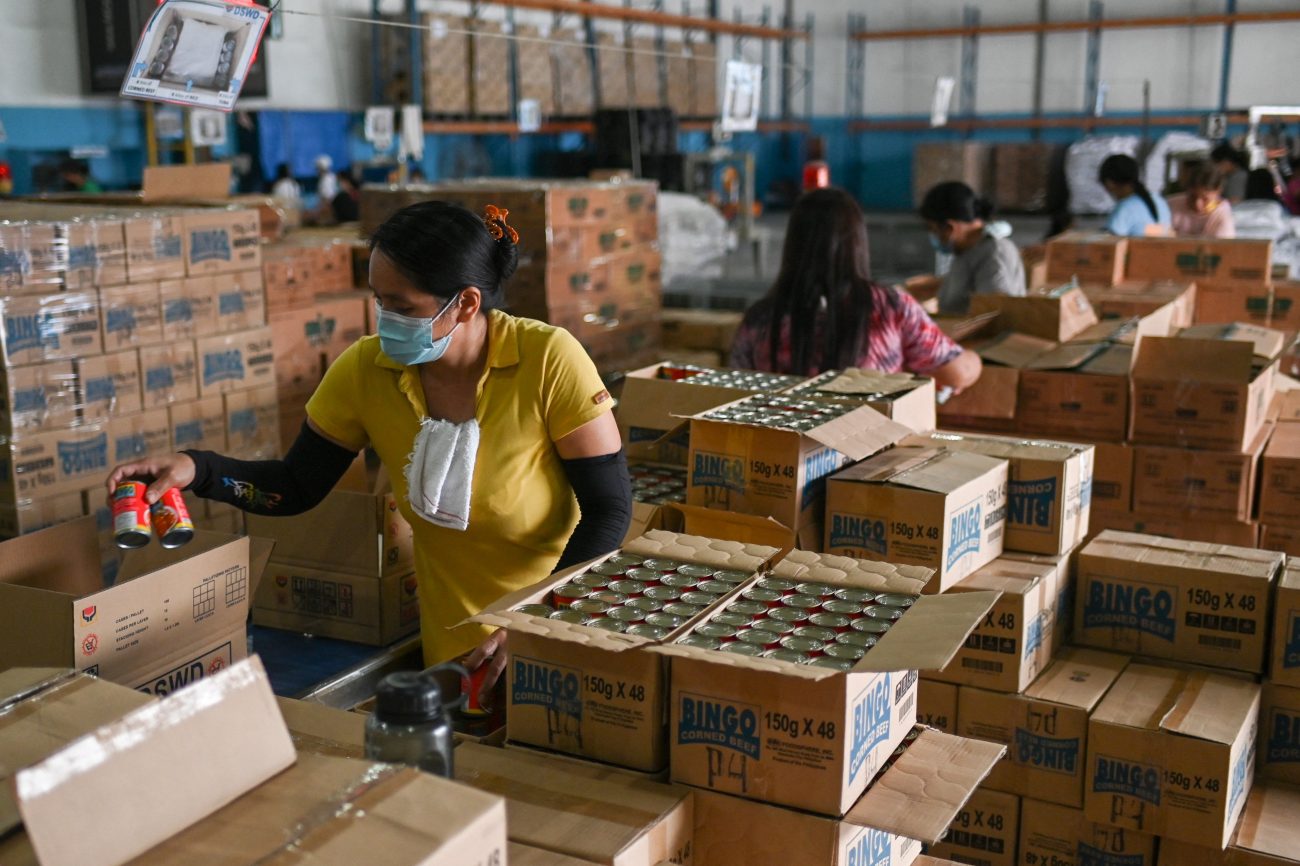 Volunteers prepare relief goods for people affected by Typhoon Rai at a government warehouse in Manila, Philippines, Dec. 17, 2021. The storm has claimed more than 200 lives and Caritas Philippines has appealed for donations to bolster its emergency response. (CNS photo/Lisa Marie David, Reuters)

“We now have 208 dead and 52 are still missing. As relief efforts continued following one of the deadliest typhoons to have struck Southeast Asia, we have mobilized all police forces to help the local governments in the region to find the 52 missing individuals,” Philippine National Police spokesman Roderick Alba said Dec. 20.

Aid distribution was hampered by broken communication and power lines, which would take at least two weeks to be restored, Alba said.

Authorities said about half the reported deaths occurred in the island province of Bohol, in central Visayas, a popular tourist destination, ucanews.com reported. Cebu province and Cagayan de Oro city in the central part of the country also were among the most devastated areas.

In response to the disaster, Caritas Philippines appealed for cash donations to bolster its efforts to send emergency aid to the region.

“May this season of giving offer us more opportunities to do consistent acts of Alay Kapwa (offering of oneself), especially during this time of need,” the church’s humanitarian aid agency said in a Facebook announcement.

Alba said help also is coming in from other regions, especially from the private sector, “but the problem that we have is the logistics.”

“It’s a challenge how we can distribute aid because there is a total blackout (no electricity or cellphone service) in the area,” he said.

Emergency responders were relying on reports from the ground received hours after they were first sent, he added.

In addition to the deaths, about 2,500 people were injured as the powerful storm with gusts up to 168 mph swept through the country Dec. 16. Widespread destruction and flash floods forced nearly 490,000 people from their homes before the storm moved into the South China Sea Dec. 19.

“They (victims) need shelter materials, food, water and medicines urgently. That is why we are appealing for your help,” Alba said.

Richard Gordon, head of the Philippine Red Cross, said the typhoon was among the strongest ever known to have struck the country. About 20 typhoons make landfall in the Philippines annually.

“Red Cross emergency teams are reporting complete carnage in the coastal areas. Homes, hospitals, schools and community buildings have been ripped to shreds. Our volunteers are providing urgent relief for people who have lost everything, including food, drinking water, first aid, medical care, and somewhere safe to shelter,” Gordon said in a statement.

Meanwhile, President Rodrigo Duterte announced the release of about $40 million to provide food and basic services to storm survivors.

The storm, known as Odette in the Philippines classification system, was the 15th to hit the island nation this year.

PREVIOUS: Cardinal Turkson says he offered to resign at end of his term