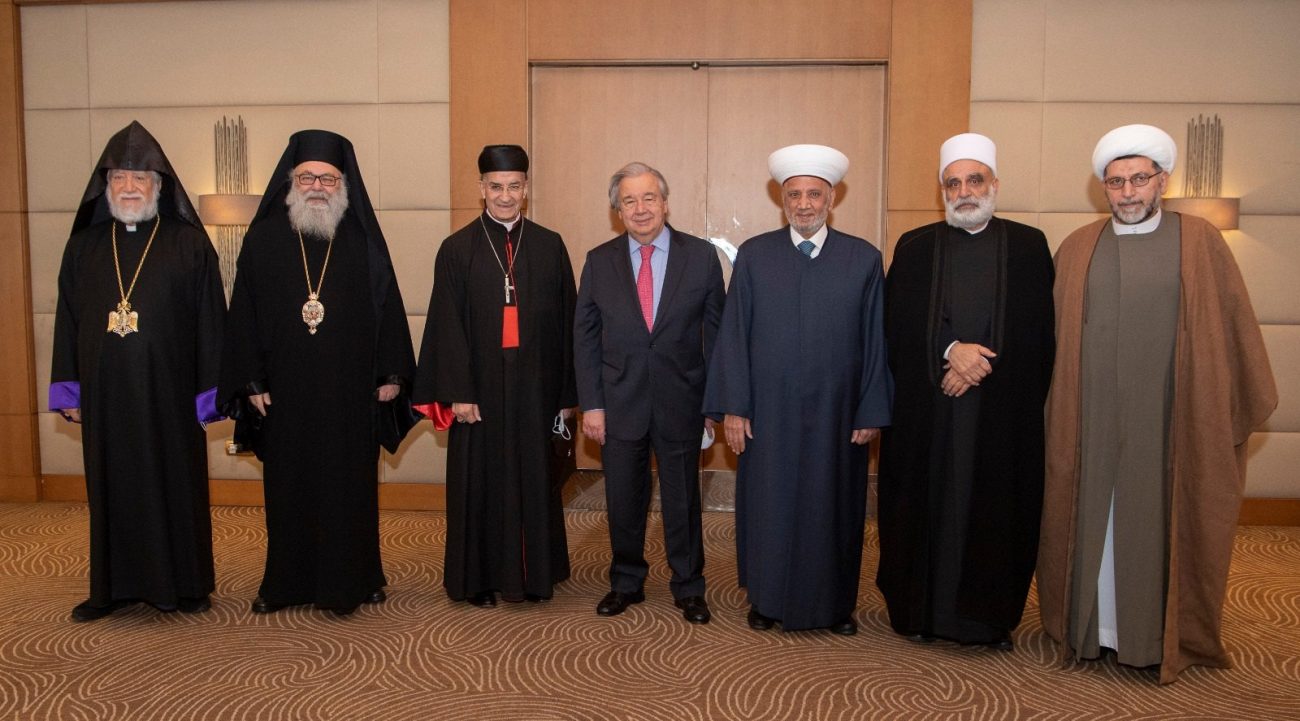 Cardinal Bechara Rai, patriarch of Maronite Catholics, was among the six leaders meeting with the U.N. leader. Others attending the meeting were Greek Orthodox Patriarch John X Yazigi, Armenian Apostolic Catholicos Aram of Cilicia and representatives from the Sunni, Shiite and Druze communities.

Upon his arrival in Lebanon Dec. 19, Guterres said that “the time has come for all of us, in the world, to express … solidarity with the people of Lebanon.”

Lebanon’s economic meltdown, which began in late 2019, has been described by the World Bank as one of the worst in the world since 1850. U.N. estimates show that 78% of Lebanese now live below the poverty line in the formerly middle-class country.

The religious leaders, in their joint statement with Guterres Dec. 20, confirmed “their commitment to openness, tolerance and coexistence as the essence of Lebanon’s identity and stability.”

They stressed “the importance of safeguarding these values, which are at the core of faith, especially at this difficult time of grave financial and socioeconomic crisis that is heavily impacting the population.”

Meeting participants expressed their determination “to focus on what unites Lebanon and brings its people together.” They encouraged their communities “to do the same and to adopt dialogue as a means of resolving differences in a spirit of consensus and togetherness.”

“Participants emphasized a shared desire across all religions and confessions to see Lebanon recover and prosper, and they are committed to doing all they can to restore hope to its people,” the statement added.

Following his visit with Lebanese President Michel Aoun Dec. 19, Guterres said, “I told the president that I have come with one simple message: the United Nations stands in solidarity with the people of Lebanon.”

“I urge the country’s politicians to work together to resolve this crisis. And I call on the international community to strengthen its support to Lebanon,” Guterres said.

“The Lebanese people expect their political leaders to restore the economy, provide a functioning government and state institutions, end corruption and safeguard human rights,” he stressed.

“Seeing the suffering of the people of Lebanon, Lebanese political leaders do not have the right to be divided and paralyze the country,” Guterres said.

Also on Dec. 20, Guterres visited the port of Beirut, which was devastated by the deadly explosions of Aug. 4, 2020, and laid a wreath on the victims’ memorial. The disaster left more than 200 dead and 6,500 injured. The investigation into those responsible continues to stall.

PREVIOUS: Caritas appeals for aid after typhoon claims over 200 lives in Philippines