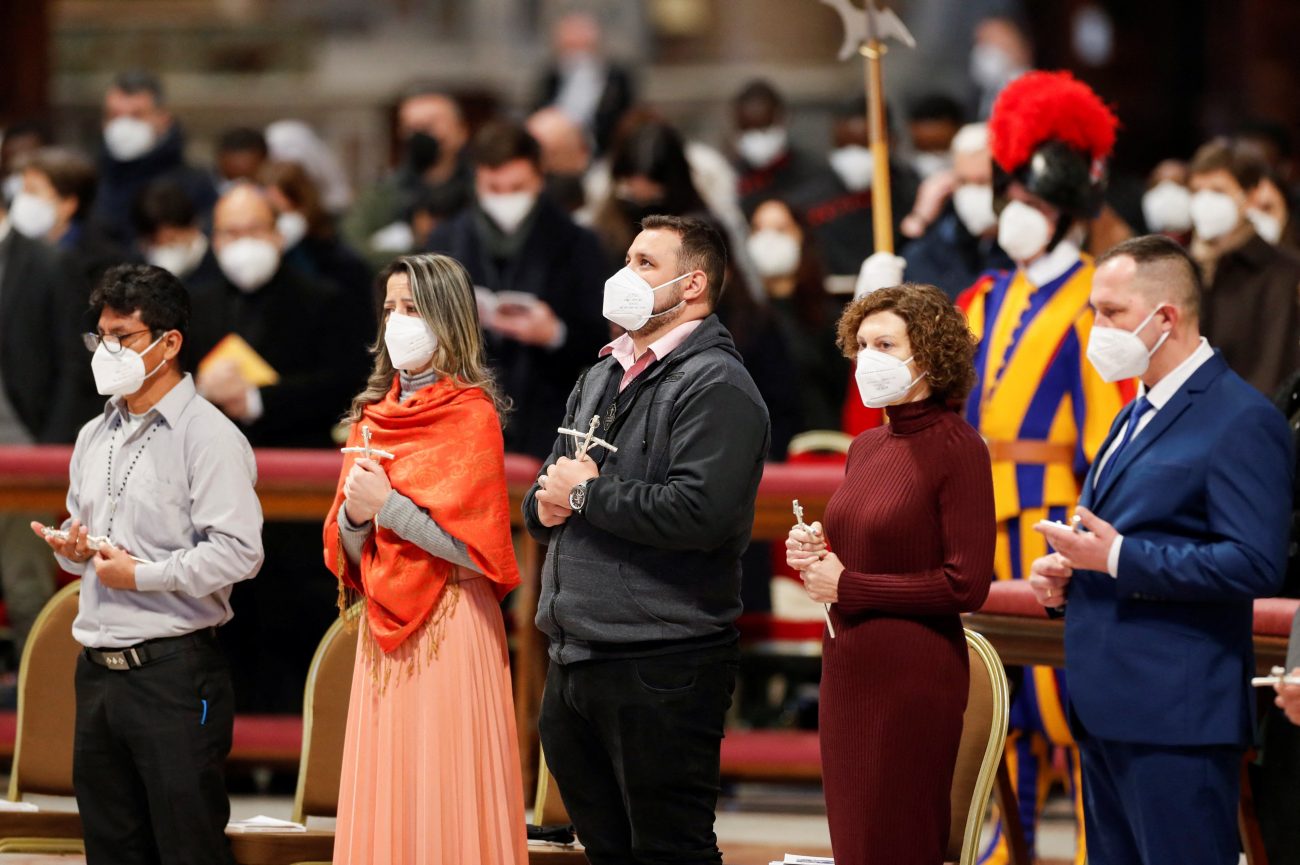 Catechists attend Pope Francis' celebration of Mass marking Sunday of the Word of God in St. Peter's Basilica at the Vatican Jan. 23, 2022. At the Mass, the pope formally installed women and men in the ministries of lector and catechist. (CNS photo/Remo Casilli, Reuters)

VATICAN CITY (CNS) — Highlighting the importance of the Bible in the life of faith and the role of lay women and men in sharing the Gospel, Pope Francis formally installed eight men and women in the ministry of lector and eight others in the ministry of catechist.

During Mass Jan. 23, the church’s celebration of Sunday of the Word of God, the pope used a revised rite for formally installing lectors, a ministry he opened to women a year earlier, and the new rite for the ministry of catechist, which he established in May.

In most countries, women and men have long served as lectors and catechists and even have been commissioned for those roles. But those formally installed in the ministries are recognized as having a specific vocation to leadership in their communities and will serve in what the church defines as a “stable” manner.

Pope Francis installed six women — from South Korea, Pakistan, Ghana and Italy — and two Italian men in the ministry of lector, telling them they were placing themselves “in the service of the faith, which is rooted in the word of God.”

As they knelt on the marble floor before the main altar, Pope Francis prayed over them and told them, “You will proclaim that word in the liturgical assembly, instruct children and adults in the faith and prepare them to receive the sacraments worthily. You will bring the message of salvation to those who have not yet received it.”

Three women from Spain, Brazil and Ghana and five men from Italy, Peru, Brazil and Poland were installed as catechists, and Pope Francis told them they were called “to live more intensely the apostolic spirit, following the example of those men and women who helped Paul and the other apostles to spread the Gospel.”

They, too, knelt before the altar as the pope said, “May your ministry always be rooted in a profound life of prayer, built on sound doctrine and animated by true apostolic enthusiasm.”

Pope Francis gave each of the lectors a Bible and the catechists a crucifix modeled after the crucifix on the crosier regularly used by St. Paul VI and St. John Paul II.

In December, the Vatican released the Latin text of the Rite of Institution of Catechists and said the revised Latin text for the Rite for the Institution of Lectors and Acolytes would be published soon. Bishops’ conferences will translate the texts into local languages.

In his homily, the pope said the 16 lectors and catechists “are called to the important work of serving the Gospel of Jesus, of proclaiming him, so that his consolation, his joy and his liberation can reach everyone.”

But, the pope said, “that is also the mission of each one of us: to be credible messengers, prophets of God’s word in the world.”

For that to happen, he said, Christians must devote themselves to reading the Bible, digging “deep within the word that reveals God’s newness and leads us tirelessly to love others.”

“Let us put the word of God at the center of the church’s life and pastoral activity,” he said.

Jesus, through the Scriptures, “reveals the face of God as one who cares for our poverty and takes to heart our destiny,” the pope said. “God is not an overlord, aloof and on high, but a Father who follows our every step.”

“This is the ‘good news’ that Jesus proclaims to the amazement of all: God is close at hand, and he wants to care for me and for you, for everyone. He wants to relieve the burdens that crush you, to warm your wintry coldness, to brighten your daily dreariness and to support your faltering steps,” he said.

Faith, prayer and Bible reading, he said, also should prompt Christians to read out to others with that same kind of care and consolation.

Through the Gospels, the pope said, it is clear that Jesus “has not come to deliver a set of rules or to officiate at some religious ceremony; rather, he has descended to the streets of our world in order to encounter our wounded humanity, to caress faces furrowed by suffering, to bind up broken hearts and to set us free from chains that imprison the soul. In this way, he shows us the worship most pleasing to God: caring for our neighbor.”

Pope Francis said “rigidity” can be a temptation in the church, giving some people the idea that the stricter they are and the more they follow precise norms the better Catholics they will be. But, he said, “our God is not like that.”

A spiritual life without care for others and work for justice may put a person “in orbit” but it touches no one, he said. “The Word of God became flesh and wants to become flesh in us.”

“Sacred Scripture has not been given to us for our entertainment, to coddle us with an angelic spirituality,” he said, “but to make us go forth and encounter others, drawing near to their wounds.” 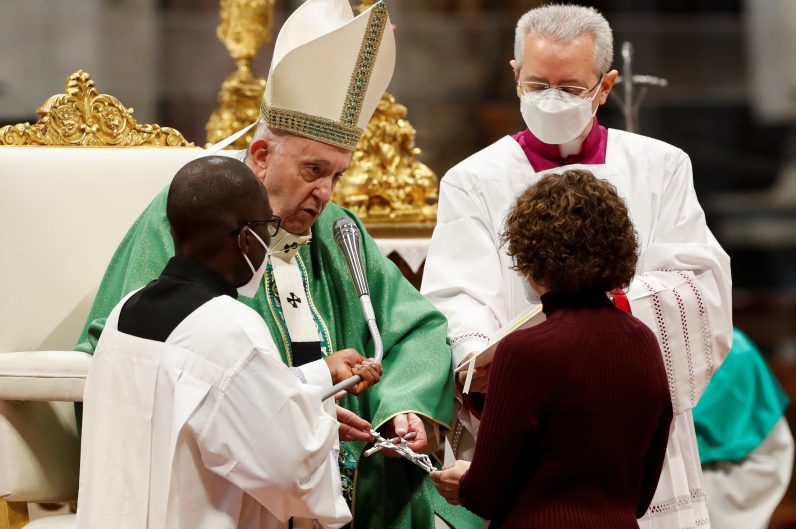 A newly installed catechist receives a crucifix from Pope Francis during a Mass marking Sunday of the Word of God in St. Peter’s Basilica at the Vatican Jan. 23, 2022. At the Mass, the pope formally installed women and men in the ministries of lector and catechist. (CNS photo/Remo Casilli, Reuters)