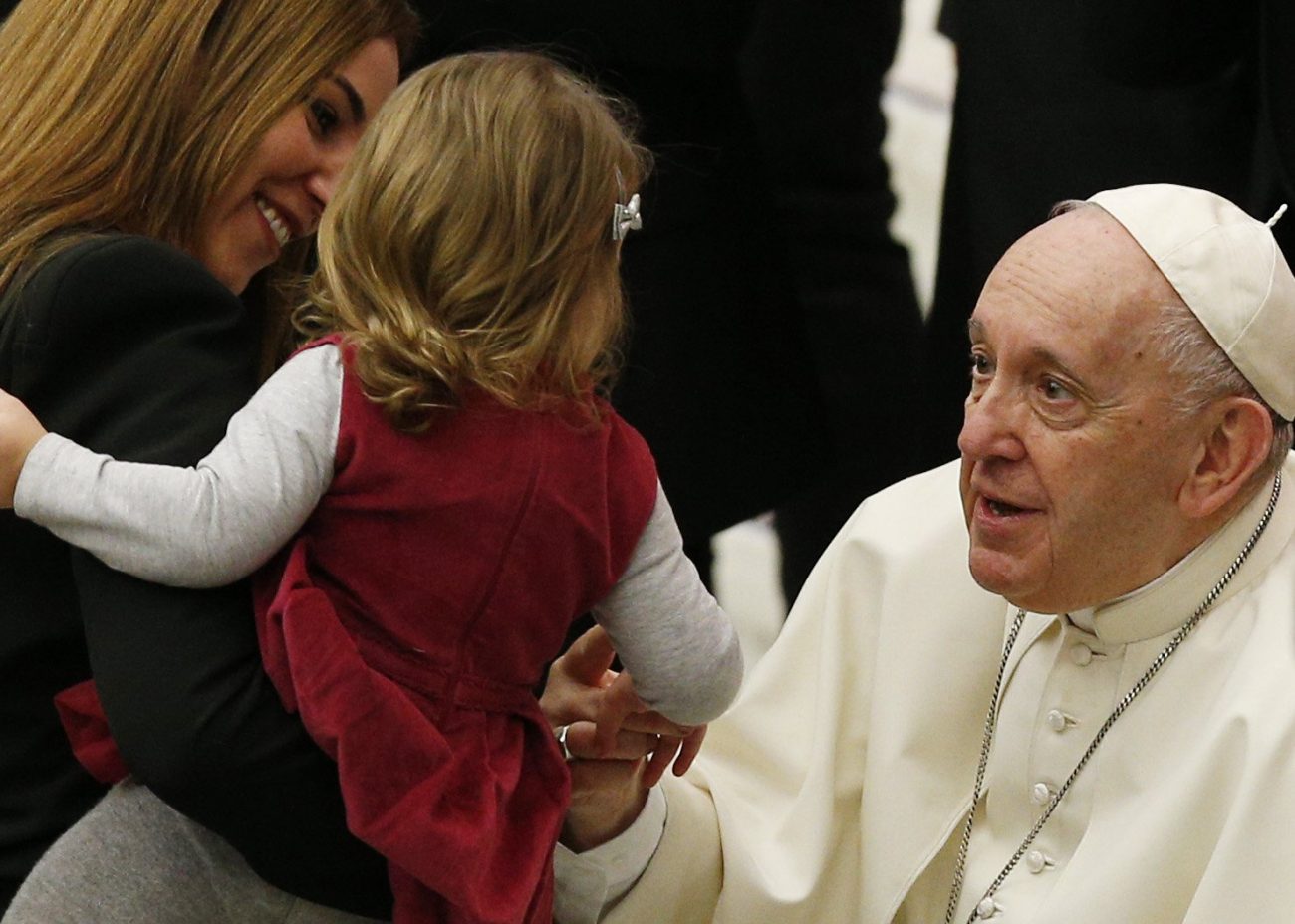 Pope Francis greets a woman and child during his general audience in the Paul VI hall at the Vatican Jan. 26, 2022. The pope explained to the crowd that he had a problem with inflammation in his right knee and that he wouldn't be able to go greet them as usual. Instead the crowd came to him. (CNS photo/Paul Haring)

The pope said his thoughts were with all those who “are crushed by the weight of life and can no longer hope or pray.”

Parents, in particular, often must grapple with situations or problems that are out of their control, such as when their child is sick or has a chronic illness. “How much pain is there!” the pope said Jan. 26 during his weekly general audience.

Parents also may be aware their children have “different sexual orientations,” so they must figure out “how to deal with this and accompany their children and not hide in an attitude of condemnation,” he said.

Parents may see their children die of an illness or in a car accident, or they see them struggle in school, he said. There is so much pain or fear, he said, but “never condemn a child.”

Continuing his series of audience talks about St. Joseph, Pope Francis focused on how the saint would discern the voice of God through prayer and dreams.

“Joseph demonstrates that he knows how to cultivate the necessary silence and, above all, how to make the right decisions before the word that the Lord addresses to him inwardly,” he said.

“Life often puts us in situations that we do not understand and that seem to have no solution. Praying in these moments, this means letting the Lord show us the right thing to do,” he said.

When people experience dangerous situations, “praying means listening to the voice that can give us the same courage as Joseph, to face difficulties without succumbing,” the pope said.

“God does not promise us that we will never have fear, but that, with his help, it will not be the criterion for our decisions,” he said. “Joseph experiences fear, but God also guides him through it,” bringing light to moments of darkness.

To parents facing challenges, the pope said, “Don’t be scared. Yes, there is pain. A lot. But think of the Lord, think about how Joseph solved the problems and ask Joseph to help you. Never condemn a child.”

He praised the compassion and courage he saw in the mothers and fathers visiting their children in prison in Buenos Aires, Argentina, accompanying them rather than abandoning them.

“Let us ask the Lord to give this courage to all fathers and mothers, as he gave it to Joseph. And to pray, no? Pray that the Lord will help us in these moments,” he added. 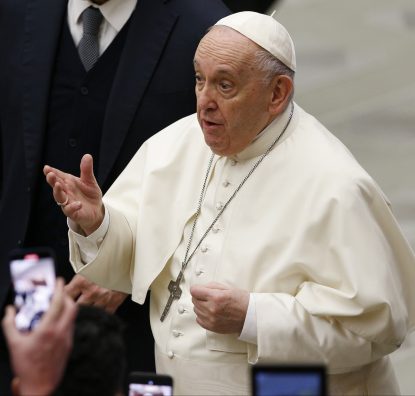 Pope Francis gestures as he greets people during his general audience in the Paul VI hall at the Vatican Jan. 26, 2022. (CNS photo/Paul Haring)

“It is only when we combine prayer with love, the love for children in the cases I just mentioned, or the love for our neighbor, that we are able to understand the Lord’s messages,” he said.

“May St. Joseph help them to open themselves to dialogue with God in order to find light, strength and peace,” he said.

At the end of his audience talk and general greetings, the pope told visitors that he would be unable to follow his customary practice of walking up to people to greet them. He instead sat in a chair at the foot of the stage for people to come up to him.

“I have a problem with my right leg; a ligament in my knee is inflamed,” he said. “It’s a passing thing. They say this only comes to old people, and I don’t know why it has happened to me,” he said to applause.

The 85-year-old pope had shown some difficulty in walking across the stage with a noticeable limp before the audience. He has also had repeated bouts of sciatica that affect his ability to stand for long periods.