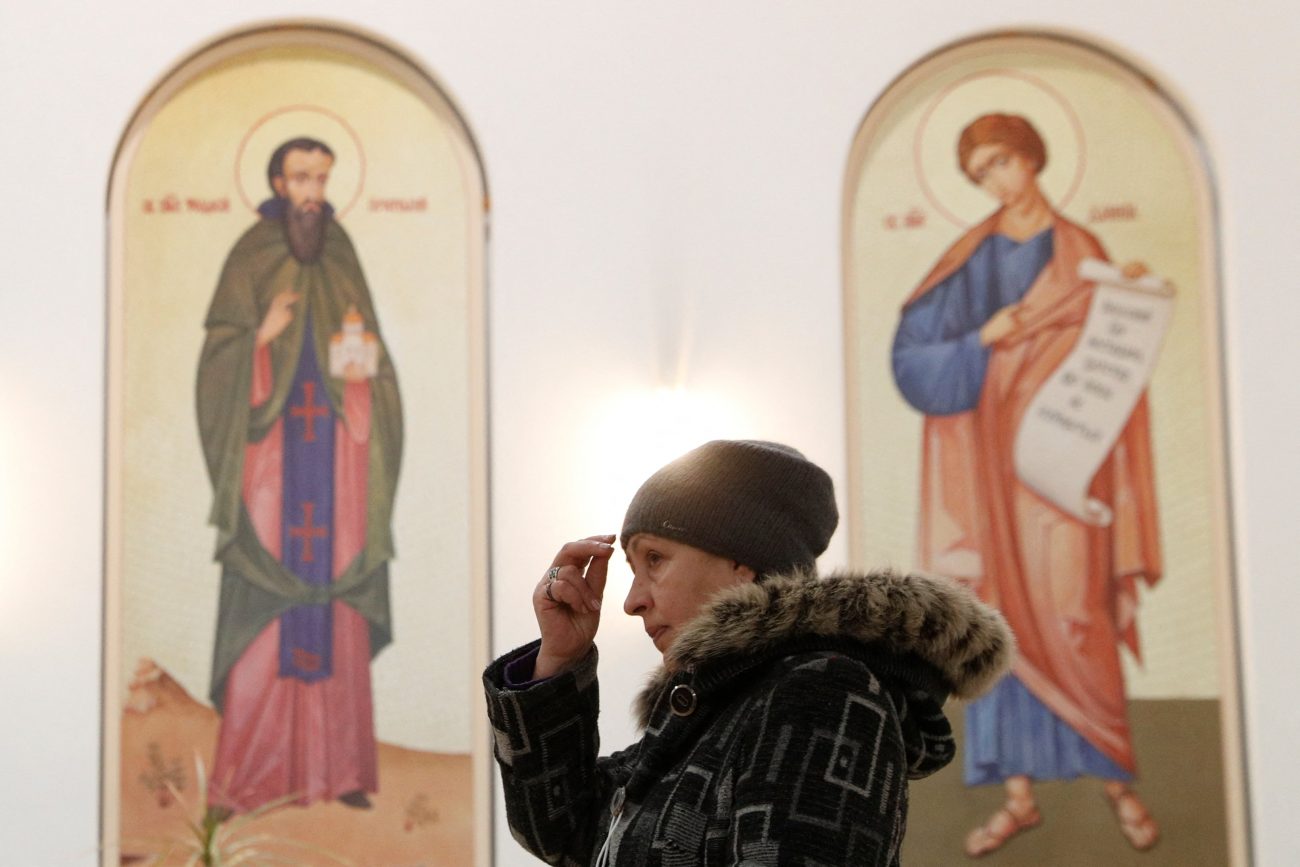 A worshiper attends a liturgy at the Ukrainian Catholic Cathedral of the Resurrection of Christ in Kyiv Jan. 26, 2022. Pope Francis appealed for an end to all war and prayed that dialogue, the common good and reconciliation would prevail. The pope made his remarks Jan. 26, the day he had set for worldwide prayers for peace in Ukraine. (CNS photo/Valentyn Ogirenko, Reuters)

VATICAN CITY (CNS) — On the day Pope Francis established as a day of prayer for peace in Ukraine, the pope appealed for an end to all war and prayed that dialogue, the common good and reconciliation would prevail.

“Let us ask the Lord to grant that the country may grow in the spirit of brotherhood, and that all hurts, fears and divisions will be overcome,” he said at the end of his weekly general audience in the Vatican’s Paul VI audience hall Jan. 26.

“May the prayers and supplications that today rise up to heaven touch the minds and hearts of world leaders, so that dialogue may prevail and the common good be placed ahead of partisan interests,” he said.

With rising tensions in the region and the threat of a possible Russian-Ukrainian conflict spreading, Pope Francis had set Jan. 26 as a day of prayer for peace in Ukraine.

With the day coinciding with his weekly audience, the pope asked people to pray throughout the day.

“Let us make our prayer for peace in the words of the Our Father, for it is the prayer of sons and daughters to the one Father, the prayer that makes us brothers and sisters, the prayer of children who plead for reconciliation and concord,” he said.

The pope said that as people remember the Holocaust on the eve of International Holocaust Remembrance Day, also “think about the more than 5 million people who were annihilated (in Ukraine) during the time of the last war. They are a suffering people, they suffered famine, they suffered so much cruelty and they deserve peace.”

During a prayer service in Rome’s Basilica of Santa Maria in Trastevere, Archbishop Paul R. Gallagher, the Vatican foreign minister, said that war and its serious consequences deprive many people of their most fundamental rights. The Jan. 26 prayer service was sponsored by the Community of Sant’Egidio.

“It is even more scandalous to see that those who suffer most from conflicts are not those who decide whether or not to start them but are above all those who are just defenseless victims,” the archbishop said.

“It is truly sad to see entire populations torn apart by so much suffering caused not by natural disasters or events beyond human control, but by the ‘hand of man,’ by actions made not in a violent outburst, but carefully calculated and carried out in a systematic way,” he said.

Russia annexed Crimea in early 2014 and, shortly afterward, Russian-backed separatists began fighting Ukrainian government forces in the eastern Ukrainian regions of Donetsk and Luhansk. Some 1.5 million people have fled the region to other parts of Ukraine and thousands of civilians and soldiers have died or been injured.

While in the spring of 2021 Russia was accused by many Western nations of trying to provoke more active fighting by holding military exercises near the border, a massive Russian buildup of troops just over the border created alarm in early December. The buildup has continued and, late Jan. 22, Britain’s Foreign and Commonwealth Office released a statement saying it had evidence that Russia was developing plans to install a pro-Russian government in Ukraine.

NEXT: Pope: People must never forget or repeat horrors of Holocaust