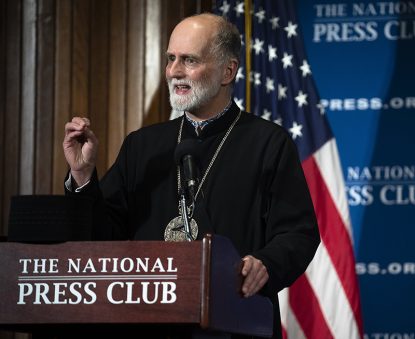 Archbishop Borys Gudziak of the Ukrainian Catholic Archeparchy delivers remarks at the National Press Club in Washington March 15, 2022, about the war in Ukraine. (CNS photo/Tyler Orsburn)

WASHINGTON (CNS) — The leader of the Ukrainian Catholic Church in the United States said March 15 that he hoped leaders of the Russian Orthodox Church would “open up and hear the Gospel,” which says, “Do not kill,” and tell Russian President Vladimir Putin to stop killing innocent Ukrainians.

Archbishop Borys Gudziak of the Ukrainian Catholic Archeparchy of Philadelphia, in a newsmaker event with Ukrainian Ambassador Oksana Markarova at Washington’s National Press Club, said the world is captivated with Ukraine’s plight, one where the Gospel is being played out in 2022.

“This is David and Goliath, this is a biblical message,” said Archbishop Gudziak.

By holding their own against a mighty Russian army, carrying the bodies of fellow Ukrainians to safety, and burying the dead as chaos unfolds around them, Ukrainians are practicing before the world what Christians find in the Gospel of John 15:13, he said.

“No one has greater love than this, to lay down one’s life for one’s friends,” Archbishop Gudziak said to members of the press.

But he also took aim at the leadership of the Russian Orthodox Church. Archbishop Gudziak spoke of how the “patriarchy” presented Russia’s National Guard chief, Viktor Zolotov, a “a giant icon of the Mother of God.”

Reuters news agency said Zolotov spoke of the slower than expected advance on Ukraine during a March 13 church service led by Russian Orthodox Patriarch Kirill of Moscow. The national guard chief is said to have commented on receiving the icon of Mary: “Victory will be for us, and this icon will protect the Russian army and accelerate our victory.”

“This is happening … in the biggest church in the capital of Russia, the patriarch is giving the Mother of God to these war criminals,” Archbishop Gudziak said, adding that “it’s very sad that today the Russian Orthodox Church and its leadership stands with President Putin. It stands for this war.”

Markarova, whom the U.S. got to know during President Joe Biden’s first State of the Union address March 1 as a guest of first lady Jill Biden, said what Russia is doing to Ukraine, leaving a civilian population without food, water and medicine, terrorizing them before killing them, is “barbaric.”

But Russia also is destroying Ukraine’s cultural symbols and places, she said, including places of worship. 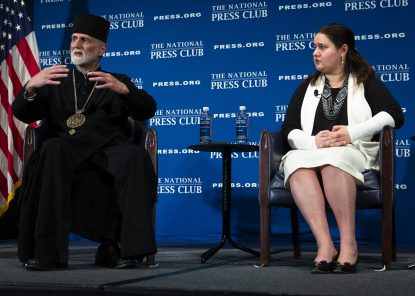 Archbishop Borys Gudziak of the Ukrainian Catholic Archeparchy of Philadelphia and Ukrainian Ambassador to the United States Oksana Markarova deliver remarks at the National Press Club in Washington March 15, 2022, about the war in Ukraine. (CNS photo/Tyler Orsburn)

“The Greek Orthodox Church, the Greek Catholic churches, the Orthodox churches, synagogues, mosques, nothing is off-limits,” she said.

Ukrainians need weapons to defend themselves, she said, as well as humanitarian aid, diplomatic efforts to secure safe corridors, and the strongest sanctions the West can impose.

“Is it OK for an autocratic aggressive nuclear power to attack a neighboring state and get away with it?” she asked. “I’m positive that all of us together, all in the civilized world have to answer decisively ‘no.'”

The world came to regret not taking action in the 1930s Nazi annexations of Eastern Europe that gave way to a larger global conflict, she said.

“We’re living now in the 1939 moment,” she said. “It’s not enough just to help Ukraine … everything that we hear from Russia is that they will not stop in Ukraine.”

Archbishop Gudziak made a plea for help in the form of armored ambulances, medicine, medical equipment, “all kinds of things that need to be replaced” when treating badly wounded patients, he said.

As he’s done in past interviews, he placed blame on Western leaders, including U.S. presidents George W. Bush, Barack Obama and Donald Trump for not doing anything about the threat Putin posed.

“He’s not being sanctioned for something he did yesterday or the day before. He’s been doing this for 20 years, 30 years,” the archbishop said, adding that it was convenient for those who were profiting to look the other way.

For its part, members of the Catholic Church, “the bishops, the priests are out there on the front lines with the laypeople,” he said, offering food, transportation, and much needed prayers even as they, too, are facing  terror.

He said he last spoke with Pope Francis before the attacks against Ukraine began, and told the pontiff to speak with Putin and with Patriarch Kirill.

“He’s been doing everything he can behind the scenes. … I am convinced that he’s made every effort,” but it doesn’t seem as if he’s gotten much of a response from them, he said.

As a religious leader, he said, it’s important “to see the positive things in this tragedy. The world has come together,” said Archbishop Gudziak, who is the head of external relations for the worldwide Ukrainian Catholic Church.

Among the most impressive testaments of faith by Ukrainians is that they’re showing something the West and secularized societies live in fear of: death, he said, and that helps them serve their brothers and sisters with peace in their hearts.

“We don’t know how to deal with death anymore in many Western societies in the 21st century. We think it’s the abyss, the end. But most of civilization is built in a belief in the eternal life, the fact that we’re called to live with God,” he said.

NEXT: Study unpacks experience of Black Catholics in America