Leaders seek prayer, advocacy and relief for Ukraine in war 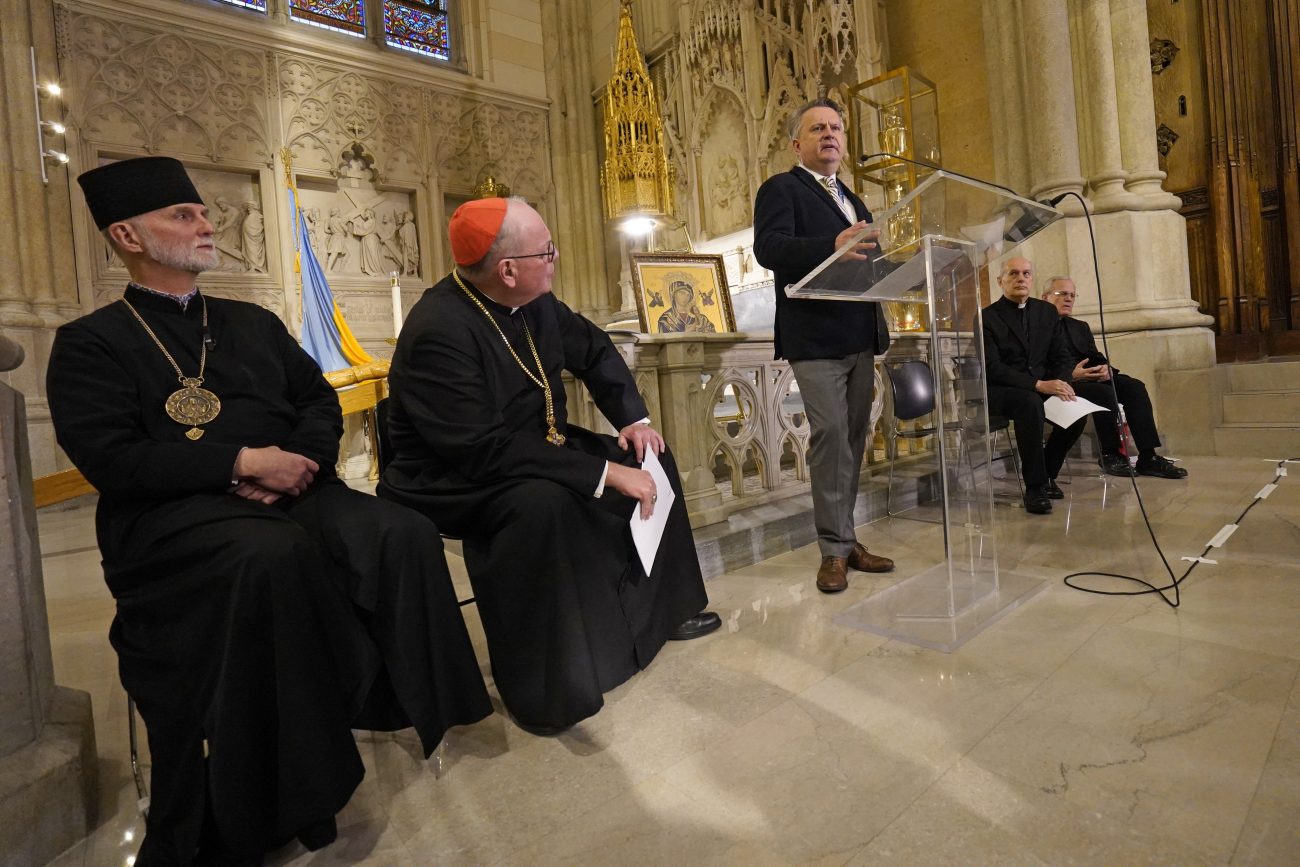 NEW YORK (CNS) — Exactly one month after Russian forces invaded neighboring Ukraine, religious and diplomatic leaders urged prayer, advocacy and relief for Ukrainians and those who help them.

Participants at a media briefing March 24 near the main altar at St. Patrick’s Cathedral in New York offered candid assessments of the war’s physical and spiritual toll. They also expressed hope that unprecedented solidarity among the world’s people will help bring peace and solace in the conflict.

Sergiy Kyslytsya, Ukraine’s ambassador to the United Nations, said he tried unsuccessfully to appeal to the dignity and beliefs of Russian diplomats in the U.N. Security Council and General Assembly in the days before the Feb. 24 start of the war.

“I told the Russian ambassador that there is no purgatory for war criminals. I do believe that war criminals are going straight to hell, unfortunately. I invited him to pray for his salvation and for the salvation of (Russian President Vladimir) Putin’s henchmen,” he said.

Kyslytsya spoke before returning to the U.N. to vote on a General Assembly resolution to deliver humanitarian aid to Ukraine.

He said, “Healthy forces are clearly in the majority” at the U.N., but the organization closed its eyes to instances of “pure evil” perpetrated by the Russian Federation in Moldova, Syria, Georgia, the Central African Republic and other places in the 30 years since the dissolution of the Soviet Union.

He said human trafficking is among the significant and realistic concerns for the more than 3 million vulnerable Ukrainians now “scattered across Europe.” Kyslytsya said trafficking is not a theoretical premise for academic discussion but should be part of planning in all of the places refugees are arriving.

He recalled that trafficking was hard to address when more than 1 million people arrived in Europe from the Middle East in a one-year period in the past decade. Now that 3 million-plus Ukrainians have become refugees in a matter of weeks, “you can imagine the scale of the tragedy and the volume of responsibility,” he said.

Archbishop Gabriele Caccia, the Vatican’s permanent observer to the United Nations, said that “what is happening now is a defeat of common humanity.”

He said in a meeting with the Russian ambassador to the Holy See and telephone conversations with Ukrainian President Volodymyr Zelenskyy and by dispatching high-level representatives, Pope Francis is trying to keep all doors open to restore peace.

He said Pope Francis has stressed the need to “stop the war, put down the weapons, take care of the people and talk about peaceful solutions.”

“The Holy Father does not despair, because we have the cross. It is a sign of the wickedness of human beings but also of hope that the Resurrection can overcome,” Archbishop Caccia said.

Archbishop Borys Gudziak of the Ukrainian Catholic Archeparchy of Philadelphia, said the Russian invasion is not a response to action by NATO or threats from the West or Ukraine.

Ukraine reduced its army from 900,000 to 100,000 soldiers between 1991 and 2014 and was the first country in the world to give up its nuclear capability. He said it had been the third largest nuclear power and had more nuclear capacity than the United Kingdom, China and France combined.

“What stronger demonstration of peaceful intentions can there be?” he asked.

He said resistance in Ukraine is a biblical story akin to David and Goliath. “Ukraine has won this war morally,” he said. There is both tragedy and great victory. Europe is united and the North Atlantic relationship has gotten new purpose, he said.

“People were kind of lost in the beginning of the 21st century,” their beliefs clouded by commercial and transactional considerations, he said. “All of a sudden, we see something that thousands of Ukrainians believe is worth dying for.” 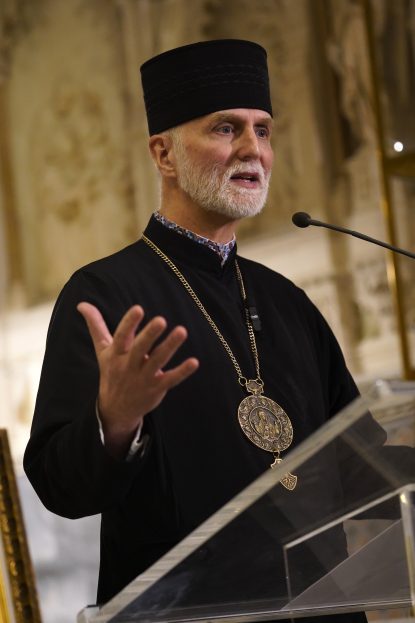 Archbishop Borys Gudziak of the Ukrainian Catholic Archeparchy of Philadelphia speaks during a news conference addressing the state of affairs in war-ravaged Ukraine March 24, 2022, at St. Patrick’s Cathedral in New York City. (CNS photo/Gregory A. Shemitz)

Archbishop Gudziak said people are rising up to pray, to help, to speak the truth and push their governments, and thousands of Ukrainians have returned to the country to defend and help others because they are seeing a concrete example of Jesus’s teaching, “No one has greater love than this, to lay down one’s life for one’s friends.”

Msgr. Peter Vaccari, president of the Catholic Near East Welfare Association, said his organization continues to work through local Catholic churches and partners in Ukraine as well as European countries hosting refugees. He said, “Funds are getting to their destinations safely.”

Archbishop Gudziak, who is the metropolitan for Ukrainian Catholics in the United States, estimated that $50 million from Catholic parishes and organizations is headed for the Ukrainian relief effort.

Each of the speakers asked for prayers for all those affected by the war. Cardinal Timothy Dolan, Archbishop of New York, invited participation in the universal initiative of Pope Francis to consecrate both Russia and Ukraine to Jesus through the Immaculate Heart of Mary by praying together March 25.

The event was held in front of a large Ukrainian “Cross of Gratitude” that has made pilgrimage visits to 46 world capitals since it was constructed in Lviv, Ukraine, in 2002 in anticipation of the 2000th anniversary of the passion, death and resurrection of Christ in 2033. It has been on display at St. Patrick’s Cathedral since March 4.