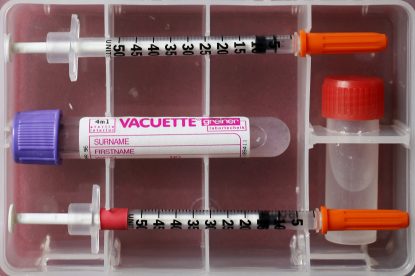 A file photo shows a doctor’s “suicide kit” in London. The House of Lords threw out an amendment that would have forced the government to bring forward assisted suicide legislation within a year. (CNS photo/Stefan Wermuth, Reuters)

MANCHESTER, England (CNS) — The British Parliament threw out an attempt to legalize assisted suicide in England and Wales.

Amendment 170 to the Health and Social Care Bill would have forced the British government to introduce assisted suicide legislation in the near future. But members of the House of Lords, Britain’s second political chamber, rejected the amendment, 179-145, following a March 16 debate.

The defeat of the amendment represents the 12th time in 25 years that the British Parliament has dismissed an attempt to legalize assisted suicide, which is punishable under the 1961 Suicide Act by up to 14 years in jail.

Danny Kruger, chairman of the All Party Parliamentary Group for Dying Well, which opposes euthanasia and assisted suicide, said: “The House of Lords has now unequivocally rejected the latest attempt to shoehorn radical assisted suicide laws on to the statute book.

“Given that supporters of assisted suicide have said that the House of Lords is more supportive than the (House of) Commons, this is ample evidence that assisted suicide enjoys neither momentum nor support,” Kruger said in a March 16 statement posted on the group’s website.

The Health and Social Care Bill is aimed at reforming and restructuring Britain’s National Health Service and is reaching its final stages of the parliamentary process, having already passed through the first chamber, the House of Commons.

The assisted suicide amendment would have imposed an obligation on the government to introduce legislation “to permit terminally ill, mentally competent adults legally to end their own lives with medical assistance” within a year of the bill becoming law.

The government opposed the amendment because it would set a precedent whereby politicians could dictate legislative programs ahead of terms of office.

Nathan Stilwell of Humanists UK, a group that supported the amendment, said the failure of the amendment “robs those who need an assisted death of the choice, dignity and autonomy as to when to end their lives.”

“Allowing people to choose the manner and moment of their own death is the hallmark of a compassionate society and should be a basic right,” he said a statement posted March 16 on the website of his organization.