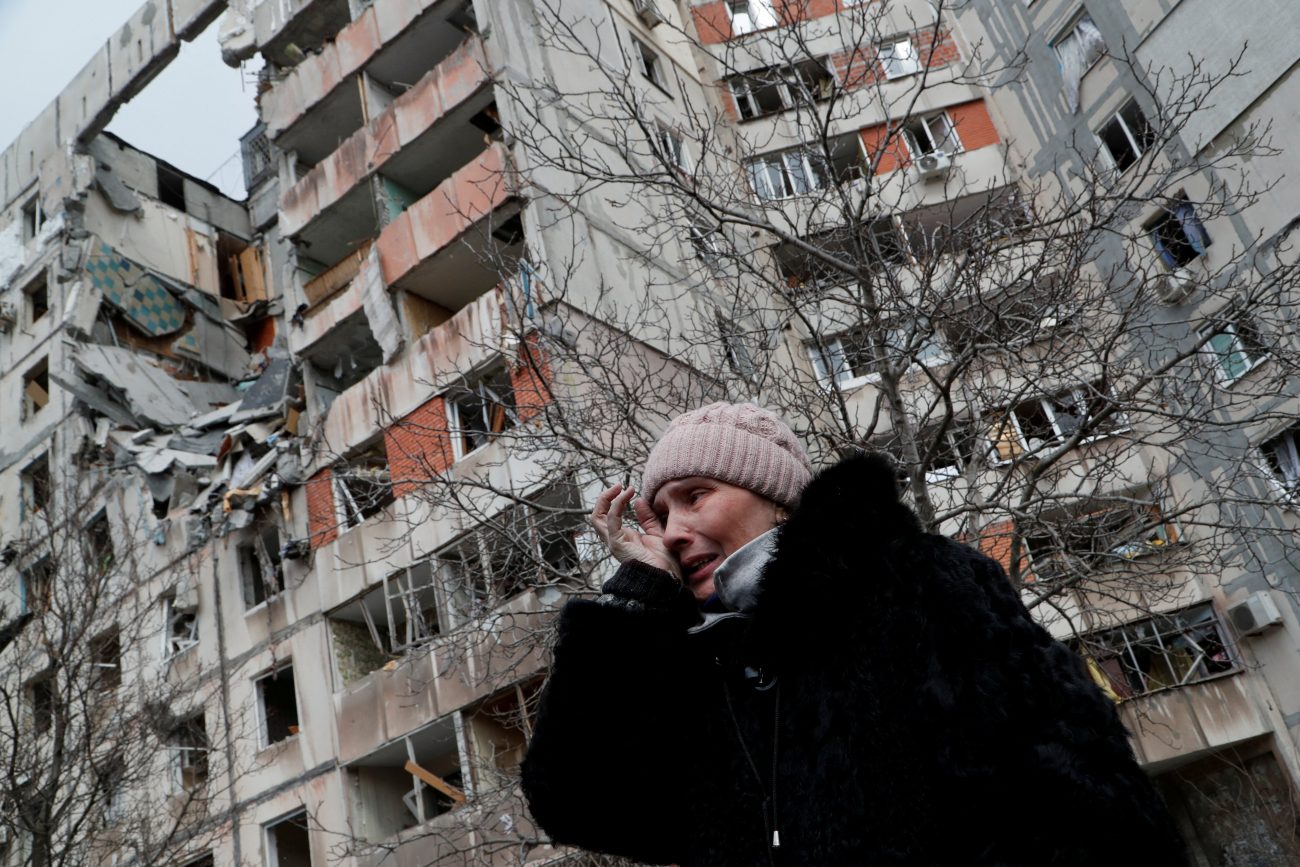 A woman reacts in front of destroyed apartment buildings in Mariupol, Ukraine, March 17, 2022. A theater in Mariupol, where hundreds of people are said to have taken shelter, has sustained heavy damage after it was bombed by Russian forces. (CNS photo/Alexander Ermochenko, Reuters)

VATICAN CITY (CNS) — Russia’s war on Ukraine, and especially its brutality, “leaves us dumbfounded,” Pope Francis said; “we never would have imagined we would again see such scenes, which are reminiscent of the great wars of the last century.”

“The heartrending cry for help of our Ukrainian brothers and sisters urges us as a community of believers not only to reflect seriously, but to weep with them and to do something for them; to share the anguish of a people whose identity, history and tradition have been wounded,” he said in a message March 18 to participants at a European conference on Catholic social teaching and social action.

“The blood and tears of children, the suffering of women and men who are defending their land or fleeing from bombs shake our conscience,” he said in the message read at the conference in Bratislava, Slovakia, sponsored by the Council of European Bishops’ Conferences.

With the war in Ukraine, he said, “once again humanity is threatened by a perverse abuse of power and vested interests, which condemns defenseless people to suffer all forms of brutal violence.”

Pope Francis thanked Catholics across the continent for their quick response in coming to the aid of Ukrainians, offering them material aid, welcome and hospitality.

“Let us not grow weary in this and let us not cease to invoke peace from God and from human beings,” he said.

According to the U.N. Refugee Agency, almost 3.3 million people had fled from Ukraine since the Russian invasion began Feb. 24; millions more are displaced within Ukraine.

Pope Francis asked European bishops “to continue to pray that those who hold the fate of nations in their hands will leave no stone unturned to stop the war and open a constructive dialogue to put an end to the immense humanitarian tragedy that it is causing.”

But he also said that the war is a sign that of the urgent need “to review the style and effectiveness of the ‘art of politics,'” an art that is supposed to promote working together for the common good and for friendly relations among nations.

War, he said, always “leaves the world worse off” and is “a failure of politics and humanity, a shameful surrender to the forces of evil.”

But Pope Francis said he hoped the war in Ukraine would provoke a renewed commitment to international cooperation in peacemaking, with Europe leading the way.

“Europe and the nations that compose it are not opposed to each other, and building the future does not mean uniformity, but uniting even more in respect for diversity,” he said.

For Christians, the pope said, that means starting “from the very heart of the Gospel: Jesus Christ and his saving love. This is the ever-new proclamation to be brought to the world, first of all through the witness of lives that show the beauty of an encounter with God and love for one’s neighbor.”

PREVIOUS: Where to give to help Ukraine