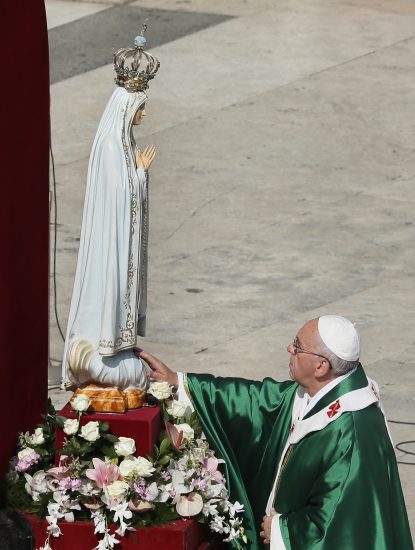 Pope Francis touches the original statue of Our Lady of Fatima after consecrating the world to Mary at the end of a Mass in honor of Mary in St. Peter’s Square at the Vatican in this Oct. 13, 2013, file photo. The pope has invited the bishops of the world to join him in “consecrating and entrusting” Russia and Ukraine to Mary March 25. (CNS photo/Paul Haring)

VATICAN CITY (CNS) — Pope Francis has asked bishops around the world to join him March 25 in consecrating Ukraine and Russia to the Immaculate Heart of Mary, something bishops in every part of the globe had started announcing the minute they heard what the pope had planned.

“Pope Francis has invited the bishops of the whole world, along with their priests, to join him in the prayer for peace and in the consecration and entrustment of Russia and of Ukraine to the Immaculate Heart of Mary,” Matteo Bruni, director of the Vatican press office, said March 18.

Three days earlier, the Vatican had announced the pope would lead the prayer in St. Peter’s Basilica during a Lenten penance service and that, on the same day, the feast of the Annunciation, Cardinal Konrad Krajewski, the papal almoner, would lead a similar act of consecration at the Shrine of Our Lady of Fatima in Portugal.

Even before the announcement from the Vatican, bishops from around the world had announced special services at which they would join Pope Francis. Bishops in cities across North America joined bishops from New Zealand, Philippines, Russia, Ukraine and other countries planning special services.

When Mary appeared to three shepherd children at Fatima in 1917 with a message encouraging prayer and repentance, she also asked for the consecration of Russia.

Some groups have continued to argue that Mary’s wish at Fatima was never fulfilled or that it was never done properly because the pope consecrated the world and not “Russia.” The Vatican, however, has insisted St. John Paul II did so in 1984 when he led the world’s bishops in the consecration of Russia and the world. The late Sister Lucia dos Santos, the last surviving visionary and the one who received the instructions for the consecration, had said that it was properly performed.

At his Sunday recitations of the Angelus since Russia invaded Ukraine Feb. 24, people have been showing up in St. Peter’s Square with signs asking the pope for the consecration of Russia or of Russia and Ukraine to Mary.

The Fatima message promised: “If my requests are heeded, Russia will be converted, and there will be peace; if not, she will spread her errors throughout the world, causing wars and persecutions of the church. The good will be martyred; the Holy Father will have much to suffer; various nations will be annihilated.”

But, the message continued: “In the end, my Immaculate Heart will triumph. The Holy Father will consecrate Russia to me, and she shall be converted, and a period of peace will be granted to the world.” 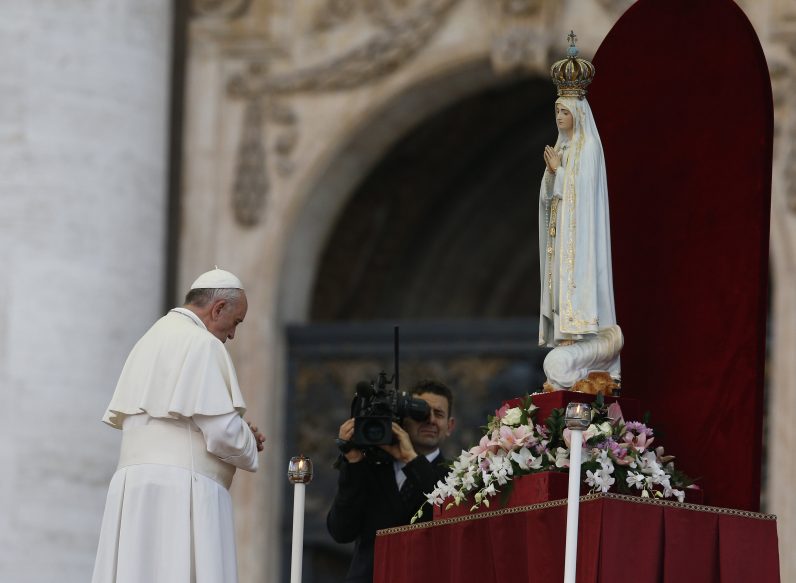 Pope Francis prays in front of the original statue of Our Lady of Fatima during a Marian vigil in St. Peter’s Square at the Vatican in this Oct. 12, 2013, file photo. The pope has invited the bishops of the world to join him in “consecrating and entrusting” Russia and Ukraine to Mary March 25. (CNS photo/Paul Haring)