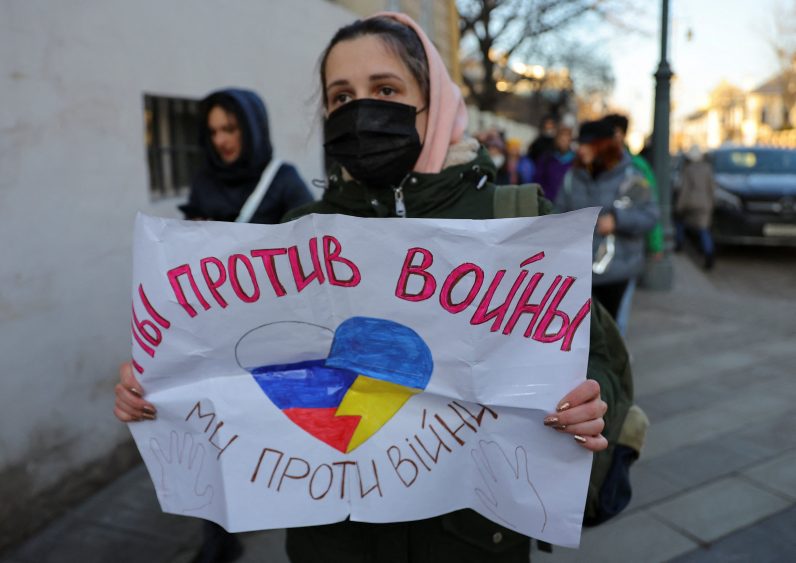 A woman holds a sign that reads “We are against war” during a protest against the Russian invasion of Ukraine, in Moscow Feb. 27, 2022. (CNS photo/Evgenia Novozhenina, Reuters)

WARSAW, Poland (CNS) — Catholics in Russia have been left “grieving, angered and bewildered” by their country’s invasion of Ukraine, according to the church’s spokesman, who also warned that citizens would face harsh economic consequences from the conflict.

Father Kirill Gorbunov, spokesman for the Russian bishops’ conference, said many Catholics are angry “and don’t know where to direct this anger — some are turning it on God, on the church, on the Russian government and on the world.”

“While some Catholics are reacting as if none of this affects them, some discussion groups formed as part of the church’s synodal process have now come together for mutual support in the current state of grief, anger and bewilderment,” said Father Gorbunov, who is also vicar general of the Moscow-based Mother of God Archdiocese.

“It’s obvious this situation will have very, very severe consequences for the well-being of citizens here. Our most important task as priests is to remind people of the church’s teaching on war and peace. But we must also be very attentive to the most vulnerable — the elderly, sick and poor — and act as counselors, helping people react in a meaningful, prayerful way which leads to integrity rather than madness.”

Detachments from Russia’s invasion force, amassed in border regions since last fall, attacked Ukraine in the early hours of Feb. 24, triggering harsh resistance from Ukraine’s 200,000-strong armed forces and a huge refugee exodus, as well as sharp fall in Russian currency, the ruble. On March 1, Russian troops continued to pound Kharkiv, Ukraine’s second-largest city, and a 40-mile column of Russian tanks and vehicles was reported to be within 20 miles of Kyiv.

In a Feb. 24 pastoral message, Russia’s five-member bishops’ conference said it was “deeply shocked” that war had erupted “despite huge efforts at reconciliation,” and the bishops backed the pope’s appeal for March 2, Ash Wednesday, to be marked by “intense prayer and fasting for the sake of saving human lives.”

They also asked priests to celebrate Masses “for the preservation of peace and justice” and called on fellow Christians “to resist lies and hatred, and be a source of reconciliation.” 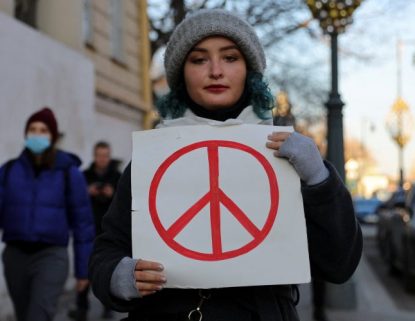 A woman holds a peace sign during a protest against the Russian invasion of Ukraine, in Moscow Feb. 27, 2022. (CNS photo/Evgenia Novozhenina, Reuters)

“This confrontation brings death and destruction and threatens the security of the entire world,” the bishops said.

“The peoples of our countries are united not only by a common history, but also by a great common suffering that befell us in the past because of the madness of war. … Let our contemporaries know they will have to give a strict account for the military actions they have taken. The course of coming centuries largely depends on their current decisions.”

Moscow Archbishop Paolo Pezzi, president of the bishops’ conference, circulated a “prayer for peace and fatherland,” to be read at Masses. It calls for Catholics to “be able to see a common future,” while also shunning “lies that destroy the world.”

Father Gorbunov told CNS Russia’s bishops had based their message on the church’s dogmatic constitution, “Lumen Gentium,” and were “expressing church teaching, not just their own opinion.”

“We’ll see if they wish to expand on this in coming days, but I personally think things are changed not by statements, but by the change of heart people experience during prayer, thinking and talking,” he said. “In normal everyday life, people don’t always understand what’s going on. But when they start to pray, they understand the terror, find compassion and see the necessity of doing something.”

“Like many ordinary people, I’m no expert in predictions — the decision-makers will get what they deserve, and I hope it won’t be the worst-case scenario for either Ukraine or our country,” he said. 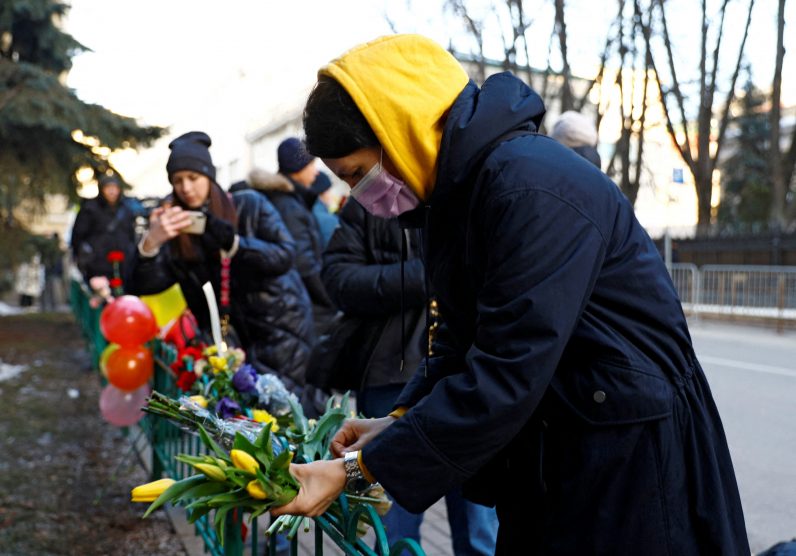 A woman places flowers outside the Ukrainian Embassy in Moscow Feb. 24, 2022, after Russia launched a massive military operation against Ukraine. (CNS photo/Reuters)

NEXT: Pope leaves door open for dialogue by not criticizing Russia