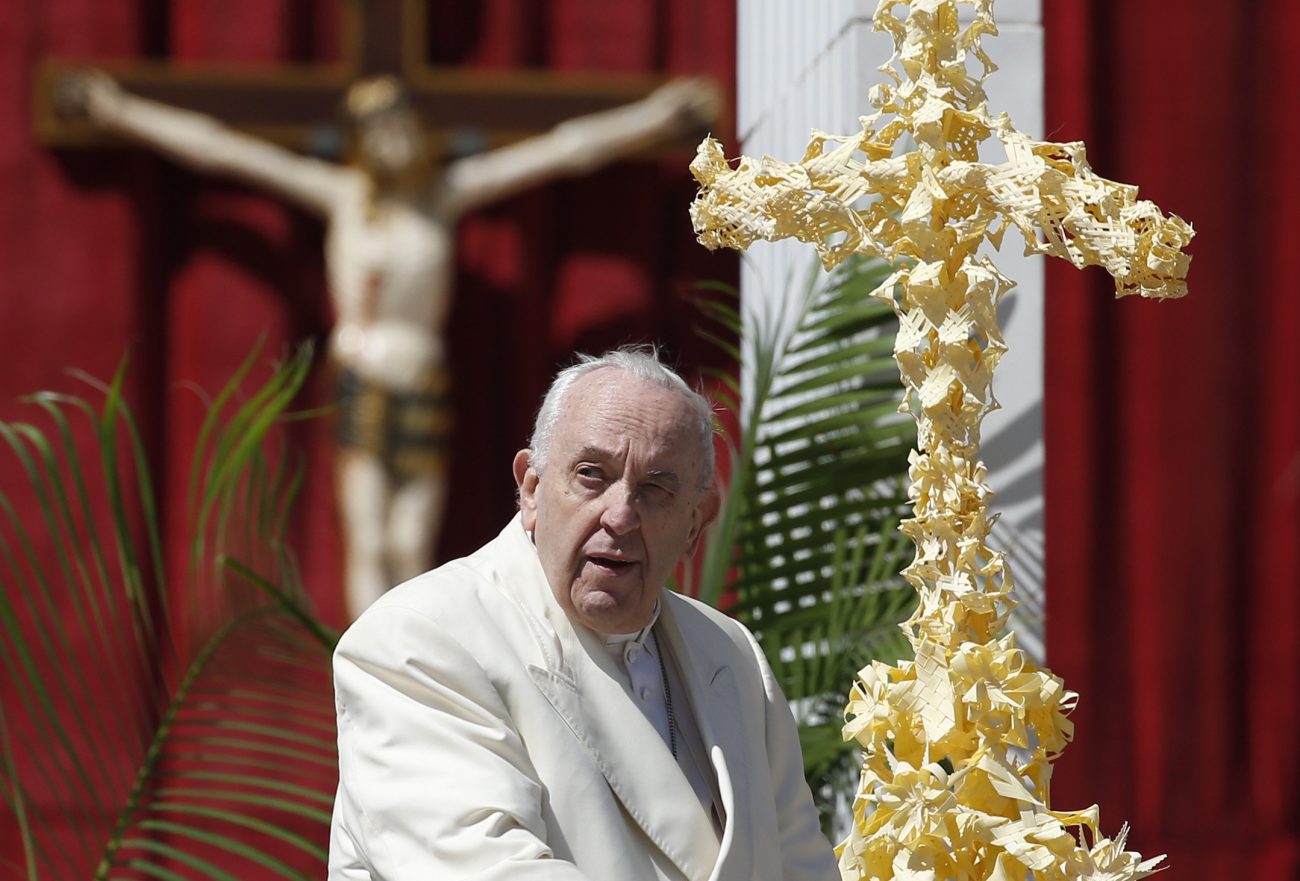 Pope Francis is pictured near palm fronds in the form of a cross as he prepares to greet the crowd at the conclusion of Palm Sunday Mass in St. Peter's Square at the Vatican April 10, 2022. (CNS photo/Paul Haring)

VATICAN CITY (CNS) — Jesus obeyed the most challenging of commandments: to love one’s enemies; and he invites humanity to do the same by breaking a vicious cycle of evil, sorrow and hatred with love and forgiveness, Pope Francis said on Palm Sunday.

“As disciples of Jesus, do we follow the master, or do we follow our own desire to strike back?” he asked in his homily April 10.

Pope Francis began Holy Week with Palm Sunday Mass in St. Peter’s Square with an estimated 50,000 people — the first time large numbers of people could participate since the start of the COVID-19 pandemic two years ago.

He also made a heartfelt appeal for a cease-fire by warring parties and the start of a “real negotiation,” even if it requires “some sacrifice for the good of the people.”

“What kind of victory will it be to plant a flag on a pile of rubble?” he said after the Mass and before leading the Angelus prayer. “Put down the weapons. Let an Easter truce begin.”

Clearly referring to the invasion of Ukraine by Russian forces, the pope did not specifically name which conflict he was talking about, saying Christ died to be victorious over sin and death, “not over someone and against someone else.”

However, he denounced this “endless” war, which “daily places before our eyes heinous massacres and atrocious cruelty committed against defenseless civilians. Let us pray about this.”

A war aiming for victory according to the logic of the world, the pope said, “is only the way to lose.” It is better to let the victor be Jesus, who carried the cross and died to free people from evil and so life, love and peace might reign.

Palm Sunday, which marks the start of Holy Week, commemorates Jesus’ entry into Jerusalem and the beginning of his passion. 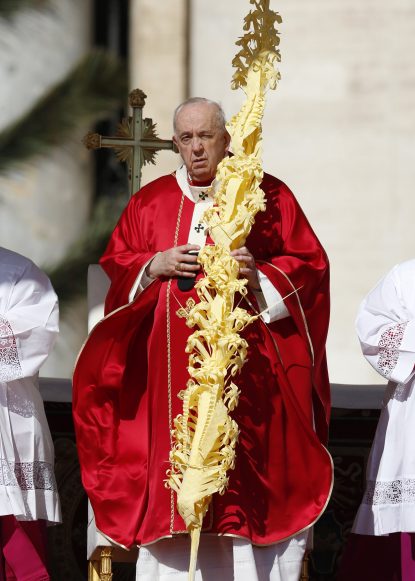 Because of ongoing difficulty walking and his doctor’s advice to rest, Pope Francis did not take part in the traditional procession to the obelisk in the center of the square but was driven by car to the altar before the start of the ceremony.

Dozens of young people carried palm branches, and bishops, cardinals and the pope held “palmurelli,” large woven palms. All the pilgrims in the square were given olive branches donated by Italian olive oil producers and several people also held large rainbow “peace” flags or smaller flags of Ukraine and other countries.

After blessing the palms and listening to the Gospel reading of Jesus’ entry into Jerusalem, the young people, bishops, cardinals and deacons processed to the steps of St. Peter’s Basilica for the main part of the Mass, which included the reading of the Passion.

In his homily, Pope Francis highlighted how Jesus “obeyed the most demanding of his commandments: that we love our enemies.”

“How often we spend time looking back on those who have wronged us! How often we think back and lick the wounds that other people, life itself and history have inflicted on us,” he said.

Instead, Jesus teaches humanity “to break the vicious circle of evil and sorrow. To react to the nails in our lives with love, to the buffets of hatred with the embrace of forgiveness,” he said.

When people resort to violence, he said, they forget about God, their father, and “about others, who are our brothers and sisters. We lose sight of why we are in the world and even end up committing senseless acts of cruelty.”

“We see this in the folly of war, where Christ is crucified yet another time,” the pope said. “Christ is once more nailed to the cross in mothers who mourn the unjust death of husbands and sons. He is crucified in refugees who flee from bombs with children in their arms. He is crucified in the elderly left alone to die; in young people deprived of a future; in soldiers sent to kill their brothers and sisters.”

If people want to see if they truly belong to Christ, “let us look at how we behave toward those who have hurt us,” the pope said.

The Lord asks people respond the way he does: by showing “compassion and mercy to everyone, for God sees a son or a daughter in each person. He does not separate us into good and bad, friends and enemies. We are the ones who do this, and we make God suffer,” the pope said.

“Brothers and sisters, in the course of this week, let us cling to the certainty that God can forgive every sin, bridge every distance and turn all mourning into dancing,” the pope said.

With Jesus, things are never over, and it is never too late, he said.

“With God, we can always come back to life. Take courage! Let us journey toward Easter with his forgiveness,” he said.

“Gazing upon our violent and tormented world, he never tires of repeating: Father, forgive them for they know not what they do.”

At the end of the Mass, the pope rode in the open popemobile to wave to and greet the crowd in the square and along the long boulevard leading to the main square, again the first time since before the pandemic began.