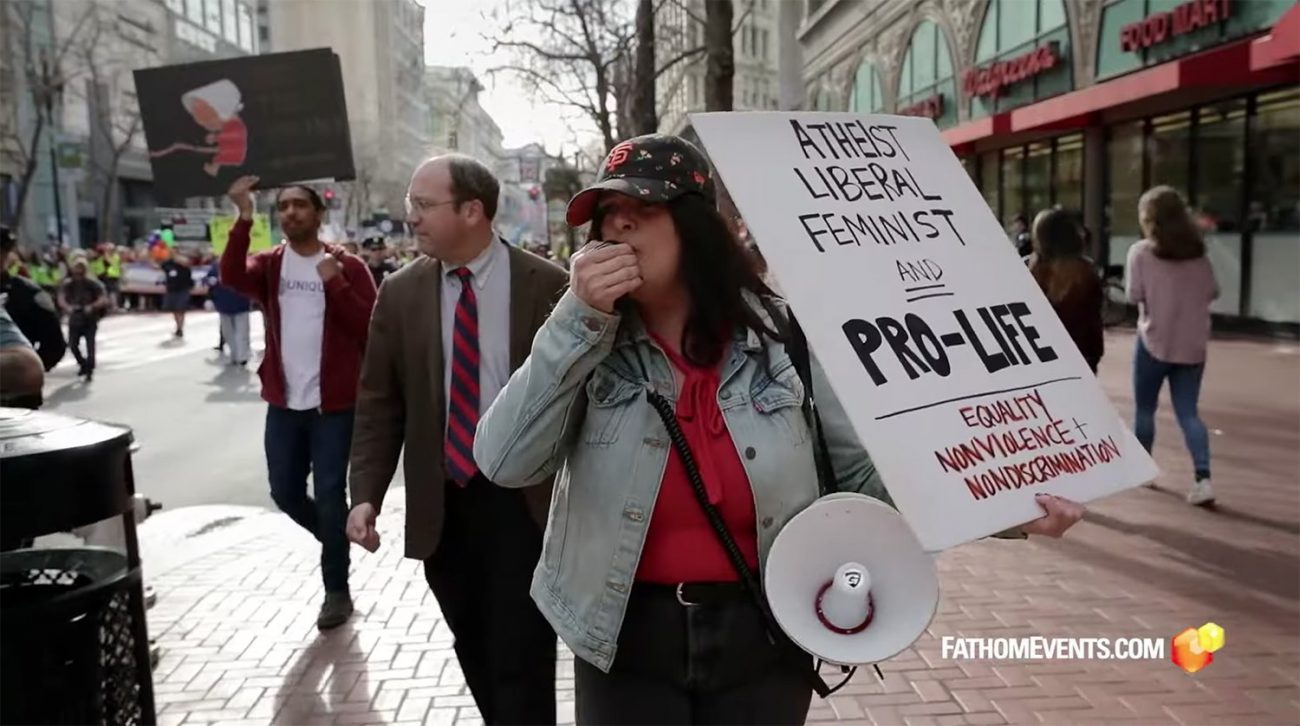 This is a screen grab from the trailer documentary "The Matter of Life." (CNS photo/Fathom)

NEW YORK (CNS) — Calm discourse about the inflammatory issue of legal abortion has long been in short supply. Since the recent leak of the Supreme Court’s draft opinion in Dobbs v. Jackson Women’s Health Organization, the tumult and the shouting provoked by the topic have only increased.

The equable tone of the documentary “The Matter of Life” makes it, accordingly, a welcome intervention into the national debate.

Produced and directed by Tracy Robinson, the roughly 90-minute film is being released by Fathom Events and will be screened Monday-Tuesday, May 16-17. Theater locations can be found at: www.fathomevents.com/events/The-Matter-of-Life.

Robinson adopts a broad agenda. The movie begins with a very necessary clarification of what the fundamental question on which everything else in the discussion depends really is. As phrased by Scott Klusendorf, founder and CEO of the Life Training Institute, that query is whether an unborn child is “one of us,” i.e., human.

The narrative then shifts to an enlightening survey of the history of U.S. laws surrounding abortion. During this retrospective, the interesting fact is noted that the host of state prohibitions on the practice adopted in the late 1800s came at the urging not only of doctors but of first-wave feminists such as Elizabeth Cady Stanton as well. They rightly saw abortion as degrading to women.

Equally telling is the reminder that the first notable publication to call for legal abortion on demand was Playboy magazine.

The other major subject with which “The Matter of Life” deals is the necessity to adopt a holistic approach to being pro-life. In this connection, Robinson highlights the work of pregnancy resource centers around the country.

Care Net, Heartbeat International and Human Coalition are among the organizations whose support for mothers facing an unplanned pregnancy is celebrated. Only a fleeting visual, alas, is given to the outstanding ministry of the Sisters of Life.

Robinson’s script is a bit muddled on the connection between Christian faith and a pro-life outlook.

Her film strives to make the point that the status of the preborn is a scientific and philosophical question, and she gives a bit of screen time to secular opponents of legal abortion. Yet the impression remains that the link between Bible-based beliefs and antipathy to the taking of fetal life is an intimate one.

Unfortunately, Robinson and her collaborators face a far more basic pitfall, one over which they have no control. Given the animosity generated by its subject matter, few people who either uphold legal abortion as a right or who consider themselves neutral on the topic are ever likely to see this documentary.

If “The Matter of Life” does end up preaching exclusively to the choir, it will be a shame, not least because some of its most impressive moments are dedicated to the conversion stories of former abortionists, like the late Dr. Bernard Nathanson and featured interviewee Dr. Anthony Levantino.

The film also recounts the moving personal histories of women who considered abortion but ultimately chose life. Their enthusiasm for the latter option is both touching and infectious.

“The Matter of Life” is obviously not children’s fare. Even adult viewers should be aware in advance, however, that it includes grisly images of dismembered babies’ bodies.

Klusendorf justifies the use of such pictures on protest posters as a necessary dose of reality. And the audience is warned about what they’re about to see. The gruesome outcome of several abortions is, nonetheless, a shocking sight from which many of those for whom Robinson’s movie is otherwise suitable may wish to avert their eyes.

This challenging interlude aside, grown-ups in search of a clear-minded and informative treatment of the most significant moral controversy of our time will appreciate “The Matter of Life.” Whatever the Supreme Court’s forthcoming decision may ultimately be, those committed to the cause of life will find this illuminating overview of the ongoing dispute a helpful tool.