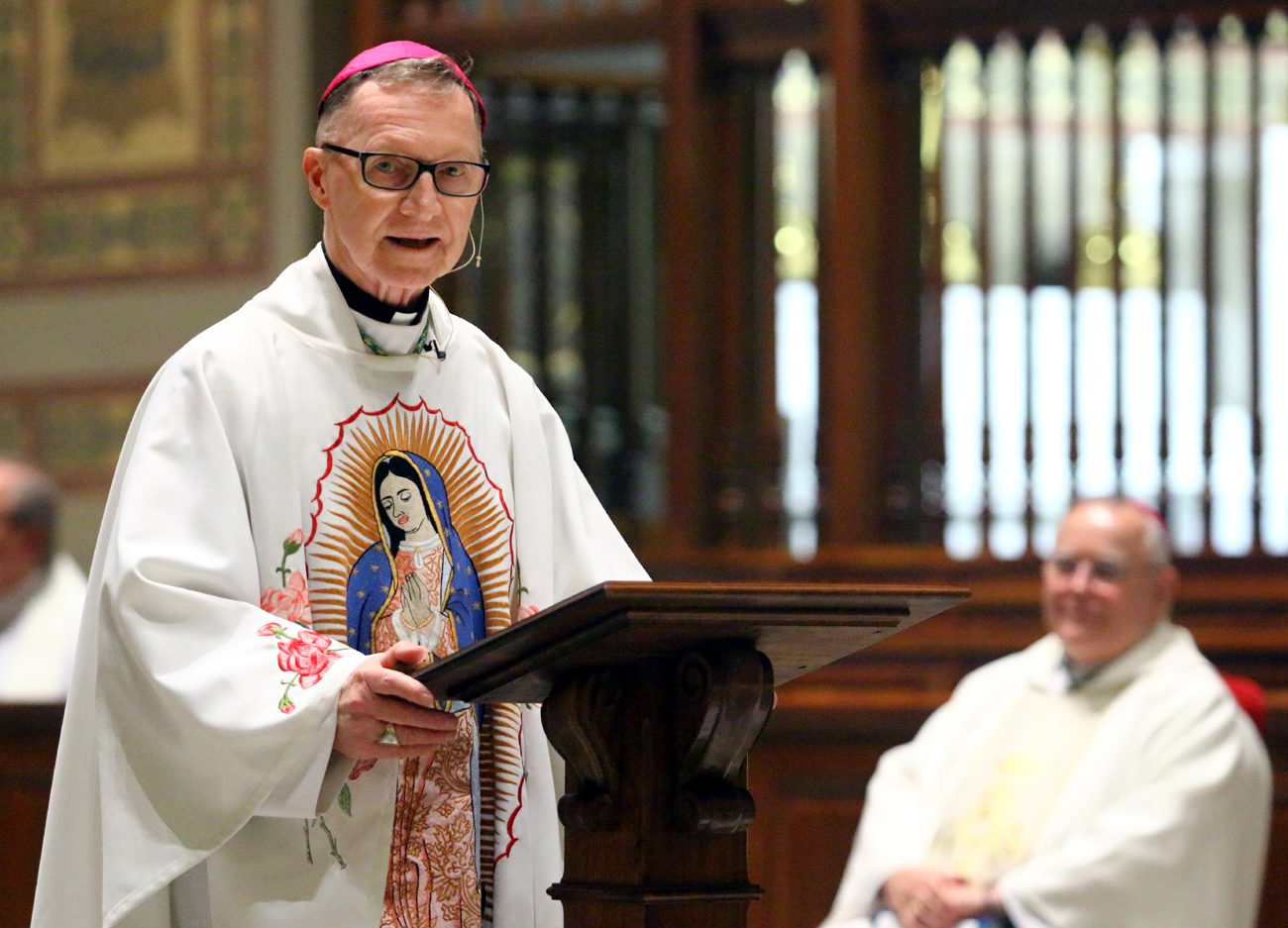 Bishop Edward M. Deliman preaches the homily during a Mass he celebrated Dec. 11, 2019 on the feast of Our Lady of Guadalupe in the Cathedral Basilica of SS. Peter and Paul, Philadelphia. His retirement as auxiliary bishop at the mandatory age of 75 was accepted May 13 by Pope Francis. (Photo by Sarah Webb)

Bishop Edward M. Deliman, a friend to Hispanic Catholics in the Philadelphia region for decades, will begin his retirement after Pope Francis accepted his resignation as auxiliary bishop of Philadelphia May 13.

His resignation was announced in Washington by Archbishop Christophe Pierre, apostolic nuncio. Canon law requires bishops to submit their resignation at age 75, which Bishop Deliman did in March of this year.

While he steps back from administrative duties such as outreach to the Hispanic community of the Archdiocese of Philadelphia, he will remain active pastorally and confer the sacrament of confirmation in retirement.

Archbishop Nelson Perez called Bishop Deliman “a model of missionary discipleship in service to others” over his nearly half-century as a priest.

“He is greatly loved by God’s people in Philadelphia and widely known as a humble shepherd who walks with and among all those for whom he provides pastoral care,” the archbishop said in a statement May 13.

“Of particular note is Bishop Deliman’s work with the Hispanic Catholic community in our region for decades. His tireless dedication to their temporal, pastoral and cultural needs deserves our mutual respect and deep admiration.”

“I’m so deeply grateful for his desire to continue in active service to God’s people,” Archbishop Perez continued. “It’s a true blessing to us all.”

He prayed that Bishop Deliman’s retirement “will be filled with peace, joy, and happiness,” and invited all the faithful of the archdiocese to join in “prayerful congratulations and best wishes to Bishop Deliman” at this time. 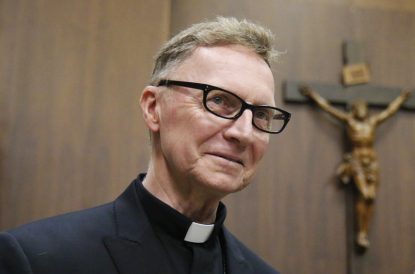 Then-Msgr. Edward M. Deliman greets well-wishers at the May , 2016 announcement that he would be ordained the 27th auxiliary bishop of Philadelphia later that year. His resignation as auxiliary bishop was accepted by Pope Francis May 13, 2022. (Photo by Sarah Webb)

Bishop Deliman was born in Lorain, Ohio on March 4, 1947 to the late Edward and Margaret (Rackish) Deliman. The couple and their three sons moved to Lower Bucks County in the Philadelphia Archdiocese in the early 1950s, settling in Holy Trinity Parish, Morrisville.

He was ordained a priest in 1973 by Cardinal John Krol and almost immediately began to immerse himself in a decades-long ministry to Hispanic Catholics.

Father Deliman studied Spanish in Douglastown, New York and further honed his language skills as a parish priest in the Archdiocese of San Juan, Puerto Rico.

His long pastoral ministry in the Philadelphia Archdiocese, during which he was named a monsignor in 1991, includes assignments as a parochial vicar in city and suburban parishes, but in particular at those with significant Spanish-speaking populations.

He served as pastor of St. Bonaventure Parish and Visitation B.V.M. Parish in North Philadelphia, St. Martin of Tours in Northeast Philadelphia, St. Agnes in West Chester, Our Lady of Fatima in Bensalem and St. Charles Borromeo in Bensalem, his most recent assignment before he was named the 27th auxiliary bishop of Philadelphia May 31, 2016.

Later in his ministry he began to be recognized publicly for his advocacy of just treatment for immigrants to the United States, including those Spanish speakers from Latin American and the Caribbean.

Joining Catholic voices of protest in 2019 over the separation of families and detention of children at the U.S. southern border by immigration officials, Bishop Deliman pleaded for the safety and protection of immigrant children.

“All children belong with their parents and families,” he said during a “Catholic Day of Action for Immigrant Children” near the U.S. Capitol on July 18 of that year. “The family is the God-created school where love is taught and safety is assured. Troubling are the images we have seen in the land of the free. Safe borders do not mean incarcerating children.”

Days earlier, he joined a rally in Philadelphia with some 300 demonstrators protesting an expected mass deportation sweep of immigrants which had been threatened by the Trump administration.

Bishop Deliman described the widely publicized operation by the Immigration and Customs Enforcement agency (ICE) as a “fear tactic,” and said that Latino immigrants with whom he spoke were “concerned.”

“I didn’t say anything publicly about the raids, because I didn’t want to instill more fear than there already was,” said Bishop Deliman of his visits to Philadelphia-area parishes with Latino immigrant members. “Many have been here for a long time, and although they are undocumented, their children were born here.”

Also in 2019 he recorded a video reminding people that there were 65 million people on the move around the world, and that Jesus himself was a refugee who shares fully in the sufferings of those who flee violence, poverty and persecution in search of hope and opportunity. 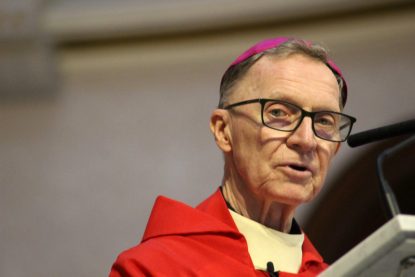 During a Sept. 20, 2021 Mass at the Miraculous Medal Shrine, Philadelphia Auxiliary Bishop Edward Deliman said indifference is one of the greatest threats currently faced by migrants and refugees. (Photo by Gina Christian)

In September of last year Bishop Deliman continued to call attention to record levels of the movement of peoples worldwide, saying “indifference” remains one of the greatest threats faced by migrants and refugees.

Catholics, he said, have a unique responsibility to overcome that obstacle.

“Jesus continues to be crucified on the Calvaries of the 21st century,” said Bishop Deliman. “Indifference continues to condemn the man on the cross, and him in whom Jesus lives. As followers of Jesus Christ, we are called to see (his) face in all of our brothers and sisters.”

But of course as auxiliary bishop, his primary focus was one of local ministry. Archbishop Charles Chaput emphasized that role when he consecrated Bishop Deliman in Philadelphia in 2016.

“While there are many needs in the archdiocese, there is a special need for the Hispanic community,” he said at that time. “Many of them are newly arrived and many of them struggle day to day to hear the Gospel spoken to them in English.

“It’s a great blessing to have you as an auxiliary bishop,” the archbishop told Bishop Deliman, and pledged to work hard with him in the Hispanic apostolate “because we have a lot to do, a lot to accomplish. Together, we will give glory to God.”

While he delegated some administrative tasks, “he is not above the people, he is with the people. He is always ready to help and give guidance,” she said. 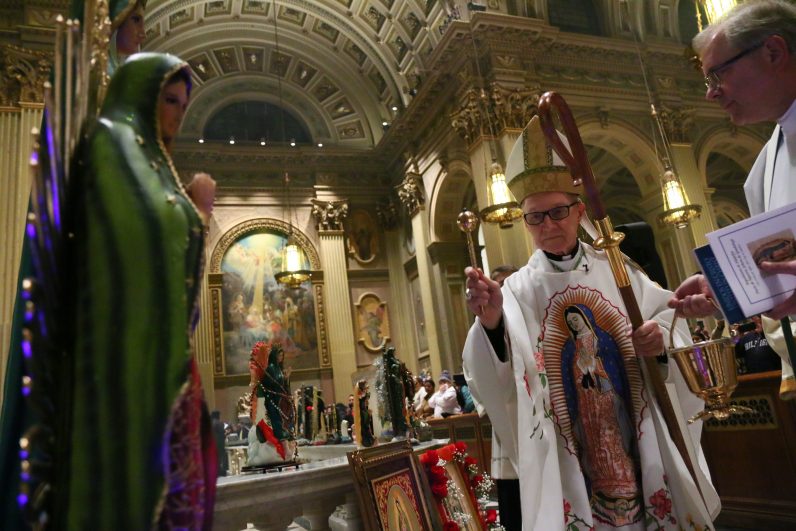 Bishop Edward M. Deliman sprinkles sacred images with holy water at a Mass he celebrated Dec. 11, 2019 on the feast of Our Lady of Guadalupe in the Cathedral Basilica of SS. Peter and Paul, Philadelphia. (Photo by Sarah Webb)

NEXT: Place hope in God, Phila. priests hear at gathering