Australian church prepares for council to discern its future 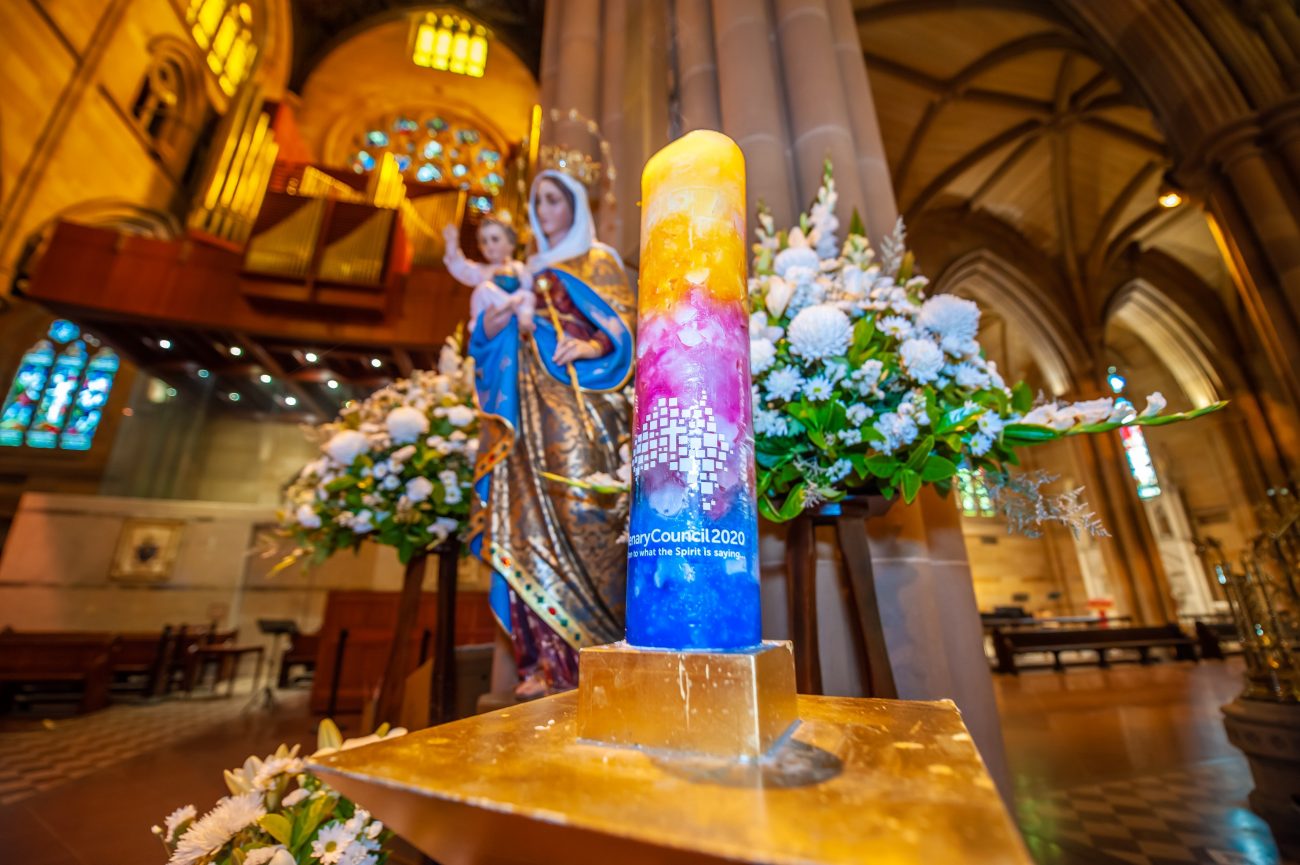 A candle symbolizing the hoped-for light of the Catholic Church's Fifth Plenary Council of Australia stands at St. Mary's Cathedral in Sydney, in 2021. The Plenary Council reconvenes July 3-9 in Sydney. (CNS photo/Giovanni Portelli, Archdiocese of Sydney)

SYDNEY (CNS) — The Framework for Motions for the second assembly of the Fifth Plenary Council of Australia has been released to members, signaling the beginning of the end of the plenary journey with a call to “undertake the necessary work to rebuild confidence in the probity and trustworthiness of the Catholic community in this country.”

The document, released June 1, includes 30 motions that will be considered during the assembly, which is set for July 3-9 in Sydney. The framework emerged from four years of national conversation on the church in Australia.

The Plenary Council is somewhat like a national synod, but can issue decrees that, once approved by the Vatican, are binding on the church in that country.

In a statement released by the Australian bishops’ conference, Archbishop Timothy Costelloe of Perth, Plenary Council president, said the framework “will form the backbone of our reflection, discussion and decision when we gather.”

“As we strive to discern, and then to embrace, all that God is asking of us now and as we move into the future, we will be challenged to recognize both the strengths and weaknesses of ‘who we are’ and the hope which lies in ‘who God is calling us to become,” Archbishop Costelloe said.

The motions are presented within eight “mission areas” that include reconciliation; choosing repentance — seeking healing; missionary discipleship; equal dignity of women and men; communion in grace: sacrament to the world; formation and leadership for ministry and mission; governance; and integral ecology and conversion.

Since deciding to hold a Plenary Council in 2018, the process involved thousands of Australian Catholics discerning two main themes: “What is the Spirit saying to the church?” and “How do we become a more Christ-centered church?”

The framework poses in its introduction that the Catholic community faces “a time of both crisis and hope.”

“The crisis has several dimensions,” the report says, three of which are explicitly listed.

The first is an “urgent need” to address the ongoing effects of clergy child sexual abuse in the wake of the final report of the Royal Commission in 2017, and an “effective response to the loss of public trust in Catholic governance and procedures.”

The second is action on the “viability and sustainability of dioceses, parishes, religious institutes and ministries due to changing demographics, personnel and resourcing.”

The third is finding “ways to develop the charisms of the ordained and of all the baptized in the church, in existing and new ministries that foster the mission of the church today.”

Other “crisis” themes throughout the document include the need for ecological conversion, the culpability of the church in the “history of dispossession” of Indigenous people, and a lack of “authentic witness to the equal dignity of all baptized persons” because of “issues of power imbalance, decision making, authority and agency.”

The framework also addresses the crisis of marginalization, specifically noting that “especially important are those who hold a grievance against us.”

Marginalized groups include “Aboriginal and Torres Strait Islander people, women, those divorced, those who identify as LGBTIQA+, and those who have suffered abuse of any form.”

A second list names “people with disabilities, people on low incomes, refugees and asylum seekers, people experiencing mental ill-health … and the exploited earth.” The “crisis of faith” raised by Archbishop Anthony Fisher of Sydney and Archbishop Julian Porteous of Hobart, Australia, in their interventions and feedback to the Plenary Council is not a strong theme in the framework.

Both archbishops promoted faith formation as a critical necessity, alongside support for families and a renewal of liturgical life.

Instead, the document’s “hope” rests on the adoption of the methodology of the Plenary Council itself as the foundation of a future Christ-centered church.

“A Christ-centered church is open to conversion, renewal and reform,” the document said.

“These features … were explored through the spiritual conversations and deliberations of the First Assembly, as well as through the ongoing reflection and feedback from Plenary Council members and others.” Another element of the “hope” theme can found in the Plenary Council’s posture in relation to “the world.”

The framework called the church to rebuild the community’s confidence in the Catholic community and said Catholics should “be aware of both the distinctiveness of their own faith tradition, and of their connectedness to people of other faiths or of nonreligious worldviews.”

“Far from separating believers in Christ from other faiths and peoples, Christ’s love impels us toward relationships of solidarity and service wherever possible in our society,” the framework said.

Where many Catholics — usually more conservative and traditional — want to be a “sign of contradiction” in the world, living a distinctive life, the framework’s basic orientation is to see the church as open and accountable to the world, and to find compromises rather than emphasize differences.

They demonstrate “how both ecclesial governance and service to Australian society may operate in a mature, innovative and effective way.”

Wesselinoff writes for The Catholic Weekly, newspaper of the Archdiocese of Sydney.

NEXT: Pope’s trip to L’Aquila raises questions about papal resignations