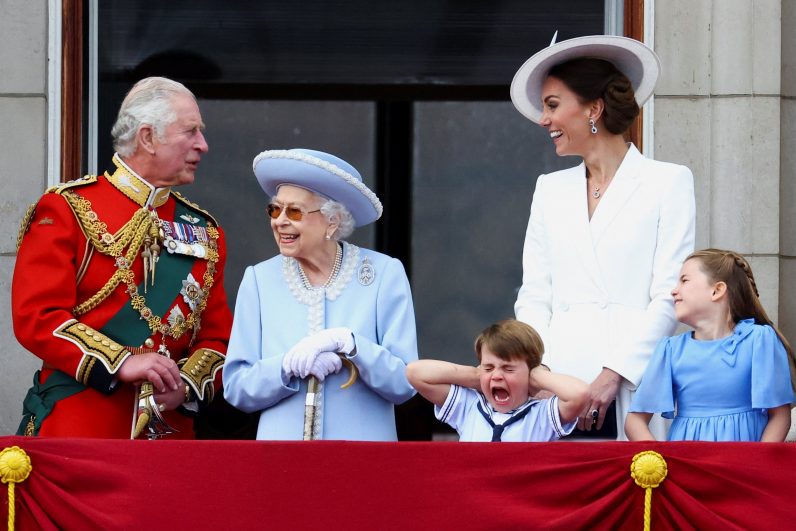 Britain’s Queen Elizabeth, Prince Charles and Catherine, Duchess of Cambridge, along with Princess Charlotte and Prince Louis appear on the balcony of Buckingham Palace as part of Trooping the Color parade during the Queen’s Platinum Jubilee celebrations in London June 2, 2022. Pope Francis sent well-wishes to Queen Elizabeth II for the occasion. (CNS photo/Hannah McKay, Reuters)

VATICAN CITY (CNS) — Pope Francis sent well-wishes to Queen Elizabeth II as the reigning British monarch began the celebrations of the 70th anniversary of her coronation as well as the public celebration of her birthday.

“On the joyful occasion of Your Majesty’s birthday, and as you celebrate this Platinum Jubilee Year, I send cordial greetings and good wishes,” the pope wrote in a telegram released by the Vatican press office June 2.

The pope assured the 96-year-old queen “of my prayers that Almighty God will bestow upon you, the members of the royal family and all the people of the nation blessings of unity, prosperity and peace.”

Queen Elizabeth is the longest-reigning British monarch. Her great-great grandmother, Queen Victoria, held the title after reigning for 63 years.

Born April 21, 1926, Queen Elizabeth adopted the second Saturday of June as her official birthday. Traditionally, British monarchs choose a different date to publicly commemorate their birthday. However, this year, the public celebration of her birthday was tied to her Platinum Jubilee celebration.

She has met with five popes in her lifetime, according to Vatican News. One year before she was proclaimed queen of England, then-Princess Elizabeth met with Pope Pius XII in 1951. Her first visit to the Vatican as queen took place in 1961 when she met with St. John XXIII.

When Pope Benedict XVI made his pastoral visit to Great Britain in 2010, Queen Elizabeth welcomed him in Edinburgh.

The queen and her late husband, Prince Philip, met with Pope Francis in 2014. After speaking privately for 30 minutes, Queen Elizabeth gave the pope a large basket of food from the estates surrounding her homes; the basket included a bottle of Balmoral whiskey.

After Prince Philip’s death in April 2021, the pope expressed his condolences to Queen Elizabeth in a message sent by Cardinal Pietro Parolin, Vatican secretary of state.

“Recalling Prince Philip’s devotion to his marriage and family, his distinguished record of public service and his commitment to the education and advancement of future generations, His Holiness commends him to the merciful love of Christ our redeemer,” he wrote. 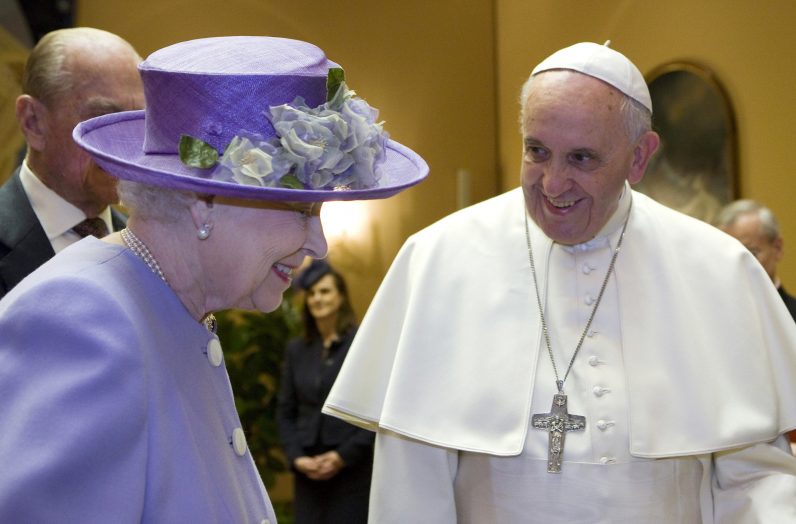 Britain’s Queen Elizabeth II talks with Pope Francis during a meeting at the Vatican in this April 3, 2014, file photo. The pope sent well-wishes to the queen on the occasion of her Platinum Jubilee celebration marking 70 years on the throne. (CNS photo/Maria Grazia Picciarella, pool)

NEXT: Australian church prepares for council to discern its future