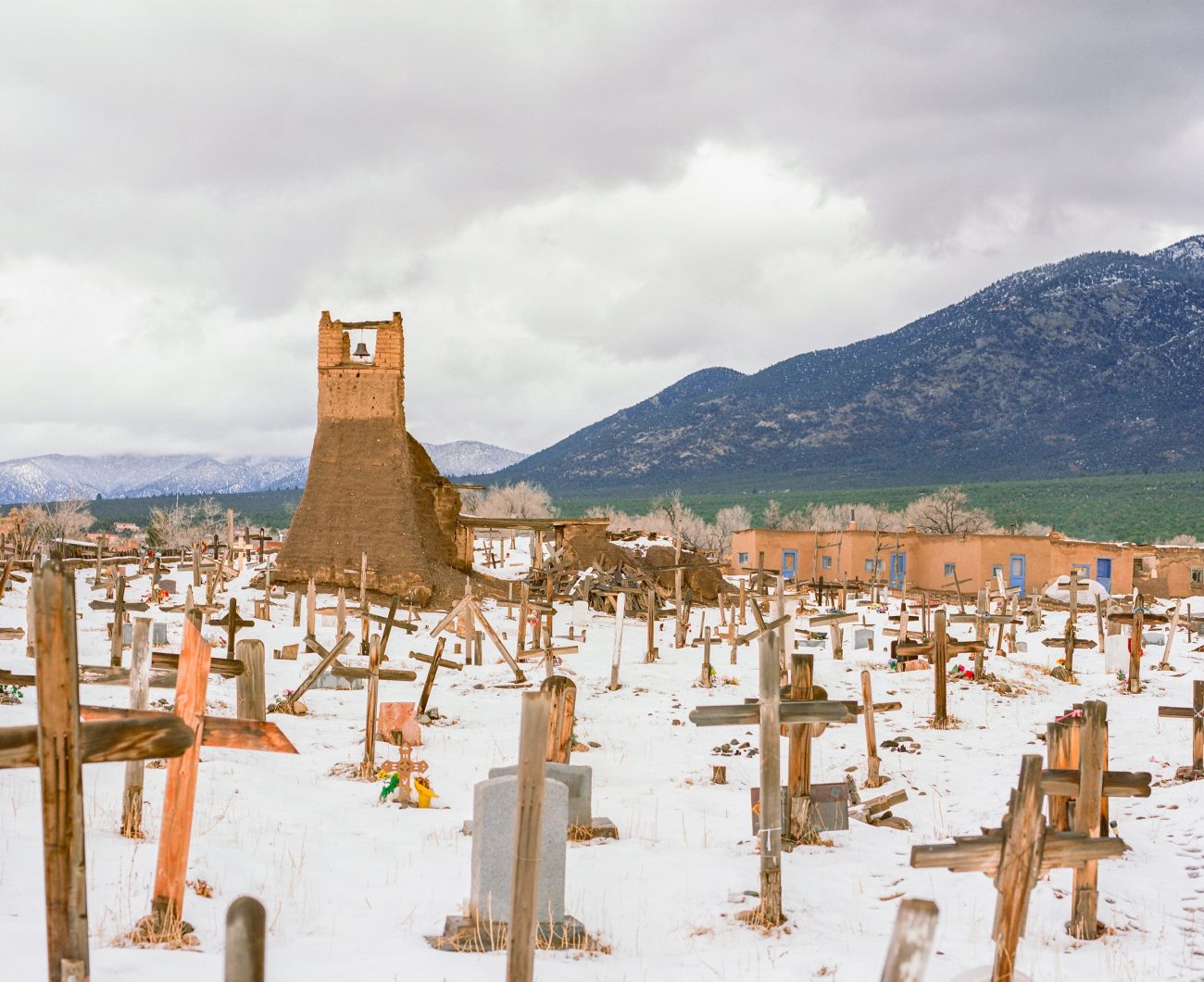 Crosses are seen in snow on the grounds of St. Jerome Catholic Chapel in Taos Pueblo, N.M., Nov. 29, 2019. St. Jerome is the patron saint of Taos Pueblo, where 90% of the Pueblo Indians are Catholic. The original church was destroyed by the U.S. Army in 1847 during the Mexican War, and the current church built to replace it was completed in 1850. (CNS photo/Isabelle Baldwin)

TORONTO (CNS) — A papal apology on Indigenous land in Canada is not irrelevant south of the border.

“An apology for one nation, in a way it’s a win for all of our nations,” said Francour. “When I say nation, I mean that as an Indigenous community — not necessarily the nation state or colonial state.

Francour and her colleagues, Indigenous media across the United States and American religious orders and dioceses have been watching closely what has happened in Canada ever since more than 200 possible gravesites were detected at the former Kamloops Indian Residential School in May 2021. From the middle of the 19th century until the very recent past, the U.S. government financed and promoted more than 350 Indian boarding schools in 29 states.

Today the Minneapolis-based Native American Boarding School Healing Coalition is pushing state and federal governments, along with churches and religious orders who often operated the schools on the government’s behalf, to face up to a history of cultural genocide.

“As a country, we have yet to experience that apology,” said Francour. “I guess my hope is that with this apology to First Nations folk in Canada … I’m hoping that will radiate both in the United States and across the globe.” 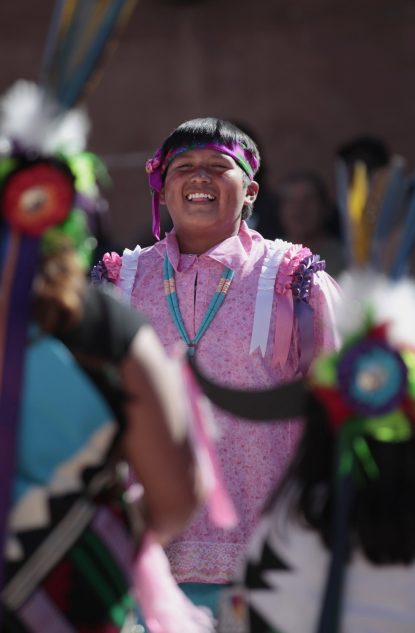 A young Native American man smiles as he takes part in a festival near the Old Zuni Mission Church on the Zuni Pueblo Indian reservation in Gallup, N.M., Oct. 22, 2021. (CNS photo/Bob Roller)

Local apologies have happened in the U.S. In 1994 Jesuit Father Jim Strzok, on behalf of the St. Francis Mission on the Rosebud Indian Reservation in South Dakota, tried to re-orient Jesuit missionary work there by apologizing for a history that was then barely spoken about.

“Often without trying to understand the unique goodness of Native American culture, boarding school staffs suppressed language and customs. Without properly appreciating the innate goodness of Native American spirituality, some practices were replaced. The priests, brothers and sisters at St. Francis Mission were a part of this. We did wrong,” Strzok wrote in an apology that appeared in local media.

In 1993 in Idaho, Father Peter Hans Kolvenbach, then-Jesuit superior general, issued a more general apology, and in 2018 the South Dakota Jesuits backed up their apology by returning more than 500 acres of land to the Rosebud Sioux Tribe.

Last year in St. Joseph, Minnesota, the Sisters of the Order of St. Benedict issued an apology to the White Earth First Nation for trauma and cultural erasure visited on children who attended the boarding school the sisters operated from 1892 to 1945, followed by the day school that continued to 1969. The sisters have opened up their archives and are fully participating in an oral history of the school.

Local and specific apologies matter, but they matter more once placed into the context of Pope Francis speaking for the universal church, said Margaret Jacobs, University of Nebraska history professor and author.

“An apology from the pope, something of that scale, will actually jump-start a process in the United States in which people who have never thought about it at all will say, ‘Oh my gosh, what’s the pope talking about?'” Jacobs told The Catholic Register, Toronto-based newspaper. “I’m hoping it could have the effect of igniting a lot of public discussion.”

Jacobs’ 2021 book documenting more than a century of massacres, forced marches, displacement, stolen land, boarding schools and adoption policies that tried to consign Indigenous Americans to history is called “After 100 Winters: In Search of Reconciliation on America’s Stolen Lands.” Despite the harsh realities she meticulously documents over nearly 300 pages, Jacobs concludes that reconciliation is possible, and non-Indigenous Americans should welcome it. 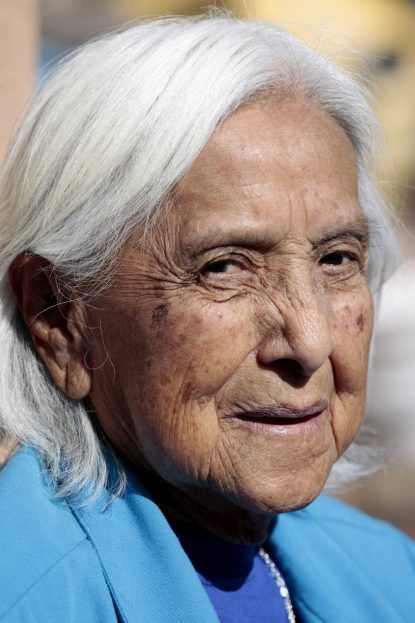 An elderly Native American smiles as she sits on the porch of her residence on the Zuni Pueblo Indian reservation in Gallup, N.M., Oct. 22, 2011. When Pope Francis visits Canada July 24-29, 2022, Indigenous activists in the U.S. will be paying close attention. (CNS photo/Bob Roller)

“Indigenous conceptions of reconciliation are not punitive,” she writes. “They do not seek vengeance or retribution. They do not threaten the existence of settlers. Indigenous people want acknowledgment of their history, recognition of their sovereignty, support for their self-determination and return of their land. This will enable them to flourish.”

The U.S. has never had a Truth and Reconciliation Commission like the one that delved into Canada’s history of residential schools between 2008 and 2015. It’s never had a government apology like the one issued by Prime Minister Stephen Harper in 2008. Given increasing polarization in American politics, Jacobs does not expect to see a national reckoning with either the blessing or leadership of Washington. But grassroots reconciliation is possible if everybody, including the churches, will commit to the process, she said.

“There’s a danger that the pope making this blanket apology will make it so the churches think, ‘Well, you know, that’s taken care of; I don’t need to do anything about it,'” she said. “But, hopefully, it might have the opposite effect, too.”

Jacobs believes most American church leaders will want to make sure the pope’s apology is not an empty gesture.

For American Catholics, the pope’s mission of reconciliation will be a litmus test for a truly authentic, Catholic faith, said Joseph Mudd, Gonzaga University theologian and director of the Catholic Studies program at the university in Spokane, Washington.

“The church, if it is to be truly the Body of Christ in history, must engage in the work of reconciliation,” said Mudd.

It is typical of Pope Francis that when he confronts an issue he lays it all on the line, Mudd said.

“The credibility of the church, as the body of Christ — which is irreducible to individual bishops, including the bishop of Rome — comes from humility and holiness, from authenticity and integrity,” Mudd said. “Therefore, there is nothing to fear from confronting histories of sin and suffering. But that doesn’t make it easy.”

NEXT: Pope condemns ‘barbaric’ attack on shopping center in Ukraine