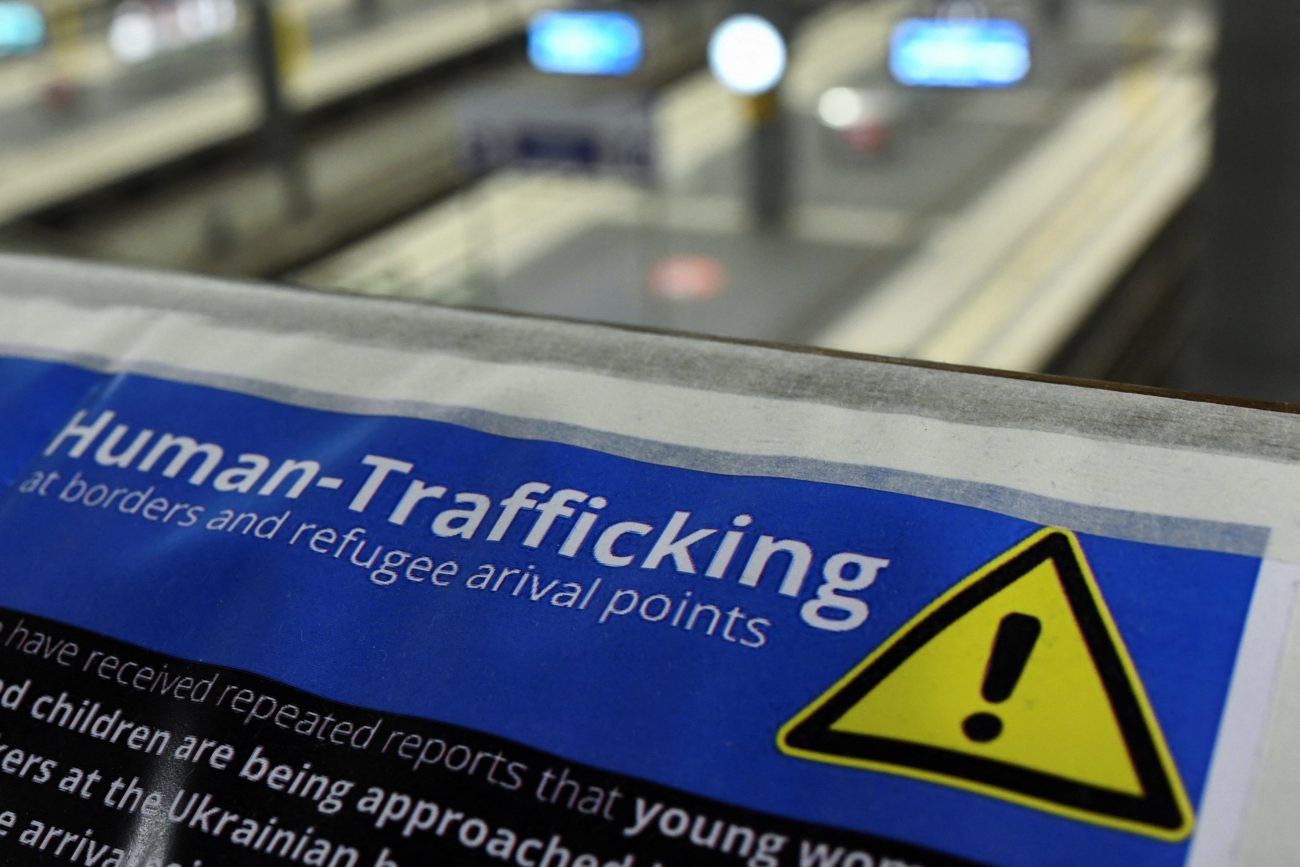 An information board with a warning about human trafficking is displayed at the central railway station in Berlin March 16, 2022. The Talitha Kum international network of religious who are fighting against human trafficking will offer a virtual tour of the sisters' work with survivors starting July 30, the World Day Against Trafficking in Persons. (CNS photo/Annegret Hilse, Reuters)

WASHINGTON (CNS) — “Critical” anti-trafficking legislation overwhelmingly approved by the House in a bipartisan vote July 26 “will go a long way toward protecting so many vulnerable people from exploitation while providing tremendous support and resources to victims,” said one of it is sponsors, Rep. Chris Smith, N.J.

The House vote came four days ahead of the U.N. World Day Against Trafficking in Persons July 30. The measure now goes to the Senate, where it is expected to pass in a bipartisan vote.

“The enormous support in the House for this critical human rights and law enforcement legislation is a testament to a widespread consensus and underscores the absolute urgency for securing the funds needed to protect victims, prosecute perpetrators and prevent trafficking from occurring in the first place,” Smith said.

Bass told her fellow House members that during her career as a health care worker and a legislator that she has seen “too many instances of human rights violations against children and other vulnerable populations — including those falling victim to the abuses of human trafficking, both in the U.S. and around the world.”

“We must take this issue seriously and continue to implement a whole-of-government approach to addressing it,” she said. “The Frederick Douglass Trafficking Victims Prevention and Protection Reauthorization Act of 2022 moves to do this not only in supporting those who have already fallen victim, but to also prevent future trafficking and bring perpetrators to justice.”

Ahead of the vote, she said: “We must swiftly pass this bipartisan measure to protect the most vulnerable among us.”

Smith, who also spoke ahead of the vote, said: “Human traffickers never take a holiday, nor can we.”

“Because traffickers and the nefarious networks they lead always find new ways to exploit the vulnerable, especially women and children,” he added, “we must aggressively strengthen laws and their implementation.”

Among other things, the Smith-Bass legislation will:

— Enhance trafficking prevention education for children by involving parents and law enforcement in age-appropriate programs to assist in the prevention of child trafficking as well as online grooming.

— Provide $35 million for housing opportunities to help women escape living with their abusers and to help prevent trafficking of graduated foster youth.

“Human traffickers never take a holiday, nor can we,” Smith, who has chaired more than 35 hearings and written five anti-trafficking laws, told House members. “Because traffickers and the nefarious networks they lead always find new ways to exploit the vulnerable, especially women and children, we must aggressively strengthen laws and their implementation.”

NEXT: Despite papal apology, some Native Americans find it hard to forgive