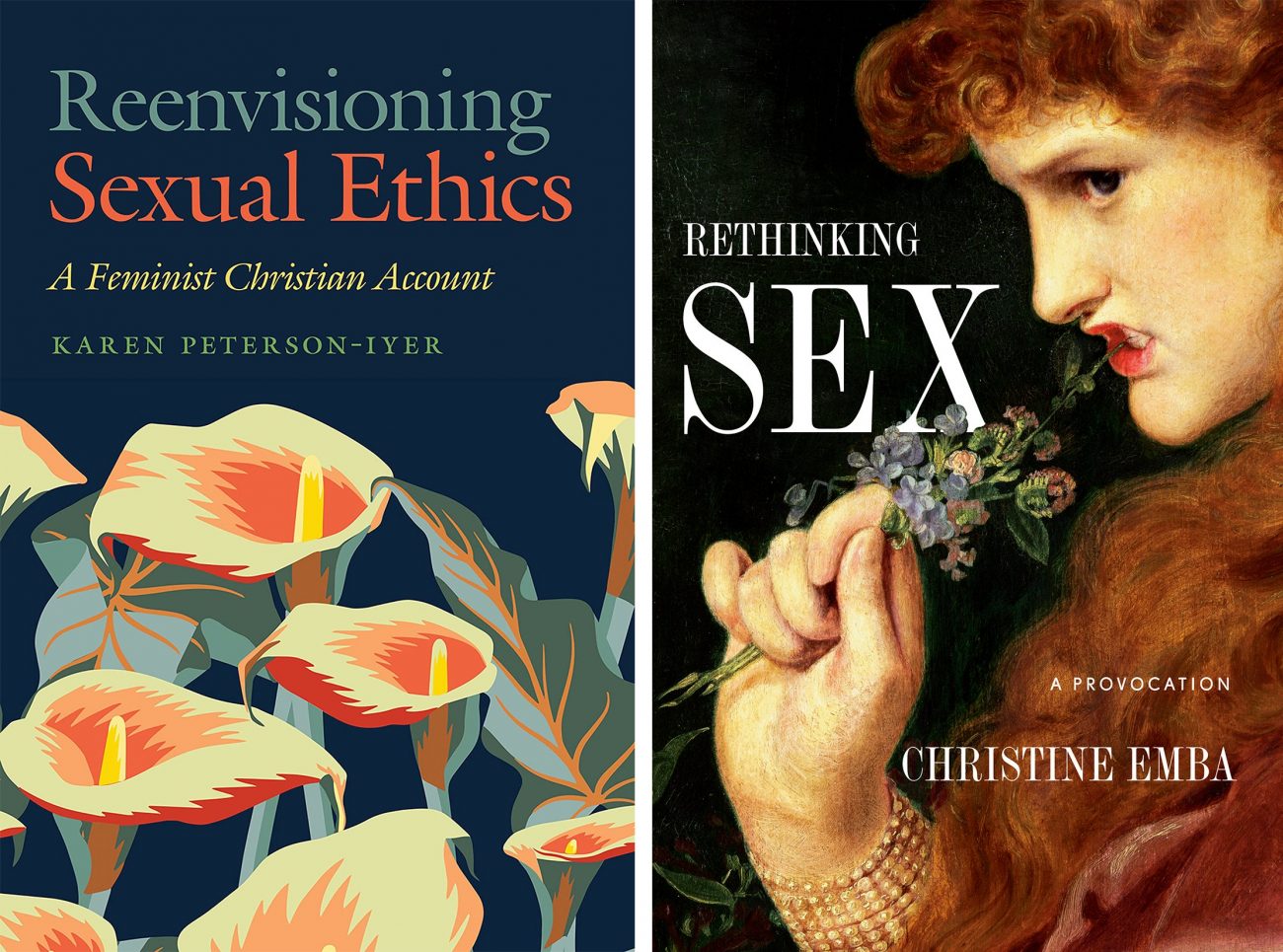 These are the book covers “Reenvisioning Sexual Ethics: A Feminist Christian Account” by Karen Peterson-Iyer; and “Rethinking Sex: A Provocation” by Christine Emba. The books are reviewed by Nancy L. Roberts. (CNS photo/courtesy Georgetown University Press and Sentinel)

The first, Christine Emba’s “Rethinking Sex,” is an engaging, fast-paced journey through the thicket of straight sexual culture. Today’s bottom line, she writes, is that anything goes, as long as the participants have duly voiced their consent. Yet this sexual liberation has not led to more happiness, but the opposite — a kind of “sexual malaise.”

Emba’s response is to challenge us to reconsider many of the cultural and historical assumptions that influence our approach to sex, such as: “Sex is a purely physical act” and “Women and men are basically the same.” She cites such popular culture as HBO’s “Sex and the City” series (“in which four single women in New York City use sex and shopping as stand-ins for personal growth”) and Hugh Hefner’s Playboy as contributors to a dehumanizing view of sex.

The influential “Sex and the City” series, which ended in 2004, emphasized “that to be an adult is to be in constant collection of a variety of experiences — especially sexual ones — and that doing so is necessary in order to be mature, self-actualized and normal. … Sex can easily be just physical, and probably should be, in order to allow yourself the freedom to experience more, different things.”

Like the “Sex and the City” script, Hefner’s Playboy extolled casual sex as “normal” and as “a crucial aspect of the good life.” Yet, Emba points out, “this new vision of sexuality didn’t promote any meaningful sort of gender equality. The ideal woman was still seen as non-demanding and compliant; the only real difference was that she was now eager to have uncommitted sex.”

Emba asserts that “women have more to lose from sex, and from a sexual culture gone wrong.” Biology’s imperatives “suggest … that the ethic of consent — assuming as it does an equivalent freedom of choice between the two parties — is leaving some seriously unbalancing factors unaddressed. Thus consent, just consent, may not be enough to render sex ethical, or fair, or equally healthy for both participants.” And that, she writes, is what should really be our goal.

Emba, a columnist for The Washington Post, writes gracefully and with occasional sharp wit. Her research included interviews with therapists, academics and sex educators as well as many college students and other singles. She also weaves in some compelling personal anecdotes and quotes Thomas Aquinas as well as Andrea Dworkin, the feminist writer and anti-pornography activist.

Ultimately she advocates a more responsible approach to sex that emphasizes respect for both participants. Such an attitude might lead toward more restraint, which she says “might give us more freedom to seek and offer love.”

As she writes: “From the sexual abuse scandals in the Roman Catholic Church to the 2015 Supreme Court decision outlawing state-level bans on marriage for same-sex couples, it has become painfully clear that Christians cannot afford to downplay sex or rely on outdated assumptions about sexual well-being or inadequate normative understandings of sexual activity.”

Particularly noteworthy is her analysis of the ethical dilemmas posed by modern sexual practices such as “hookup” culture, “sexting,” sex work and sex trafficking.

“Hookup” culture frowns upon genuinely caring for a sexual partner; instead, sex is viewed as a casual act that requires the lack of emotional or psychological connection. Such detachment, Peterson-Iyer writes, “represents one brick in the walkway of character cultivation — in this case a character potentially marked by psychic disconnectedness and mistrust.”

Sexting is mainly seen among young adults and teenagers, and Peterson-Iyer focuses on the latter. The legal, social and emotional fallout from sexting can be monumental. For instance, if teens text a nude photo of someone under age 18, that can be viewed as child pornography, which negates First Amendment protection.

“Overzealous prosecution can lead to criminal charges, imprisonment, fines and federally mandated sex offender registration — a designation that can drive teenagers from their parents’ homes and haunt those teenagers decades into the future,” she writes. Social and emotional penalties include being harassed by the teen’s peers, which can be psychologically devastating.

She suggests that we reject “a heavy-handed legalism, particularly one that treats children as if they were adult criminals. … Nor should we embrace an anti-body purity approach that demonizes sexuality more generally, negates the sexual agency of young women or portrays women’s sexuality in particular as dirty, dangerous or shameful.”

Instead, Peterson-Iyer sees “sex as sacramental: It is a tangible sign of God’s invisible grace, a window into the deepest nature of reality.”

Thus in her view, “an adequate response to sexting affirms the sacred beauty of the body and of human desire, even as it insists that these are best expressed in the context of healthy personal agency and freedom, a well-integrated body-self identity, mutuality and relational intimacy, and equal regard.”

“Reenvisioning Sexual Ethics” is well researched, with detailed footnotes and an extensive bibliography and index. This insightful and nuanced analysis will interest a wide audience ranging from college students to church members and beyond.

Roberts is a professor of journalism at the State University of New York at Albany who has written/coedited two books about Dorothy Day and the Catholic Worker.

PREVIOUS: Free for all: Movies from 1922 available online at no cost