‘The Master’: An unsuitable descent into the mind of a cultist and his follower 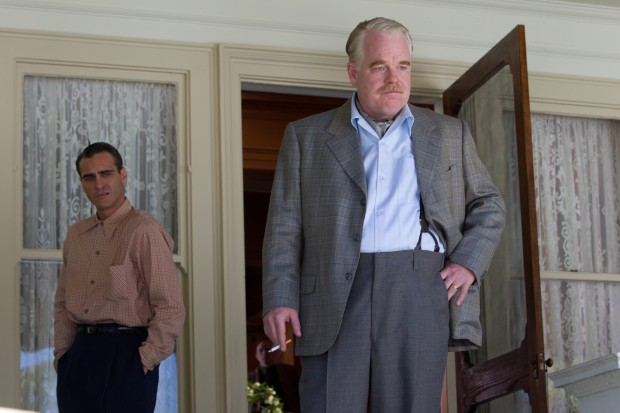 Joaquin Phoenix and Philip Seymour Hoffman star in a scene from the movie "The Master." The Catholic News Service classification is O -- morally offensive. The Motion Picture Association of America rating is R -- restricted. Under 17 requires accompanying parent or adult guardian.(CNS photo/Weinstein)

NEW YORK (CNS) — “The Master” (Weinstein) is a literate but sterile drama, a wearing cinematic experience further burdened by a degraded view of human sexuality and excessive explicitness in its portrayal.

Writer-director Paul Thomas Anderson’s period piece, mostly set in the aftermath of World War II, follows the fortunes of beleaguered, alcoholic Navy veteran Freddie Quell (Joaquin Phoenix). After being demobilized, Freddie becomes a drifter. Unable to find a place for himself in society, either professionally or personally, he fails at one job after another and dabbles in casual romantic relationships.

Once he crosses paths with charismatic cult leader Lancaster Dodd (Philip Seymour Hoffman), however, Freddie’s prospects seem to improve. Dodd takes a liking to the irascible newcomer and acquires a taste for the extra potent version of moonshine Freddie likes to cook up for himself.

Freddie not only becomes a favored follower of Dodd’s, he also submits to Dodd’s version of psychotherapy, known as “processing,” in the hope of controlling his explosive temper. But Freddie’s inner demons keep his relationship with Dodd — known to his devotees by the honorific that supplies the film’s title — a tumultuous one.

Anderson embellishes his meticulously crafted picture with striking visuals, and draws intense performances from his leads. But neither the tormented vet nor the clever peddler of crackpot ideas — Dodd believes that processing puts his subjects in touch with their many past lives — makes a particularly sympathetic figure.

Anderson, moreover, deals with the varied sexual escapades of his characters frivolously. Thus, though Freddie is portrayed as harboring forlorn hopes for a permanent bond with a girl from his past, his idealistic attitude toward her does not incline him to forsake all others — as demonstrated in a couple of graphic encounters.

An equal lack of restraint characterizes a scene in which Dodd inspires unrestrained bawdiness in his female disciples, who suddenly shed their clothes and prance across the screen in the altogether. However artistically impressive some other elements of the movie may be, the inclusion of such content renders these proceedings unsuitable for all.