Church of the Nativity: A walk through Christian architectural history 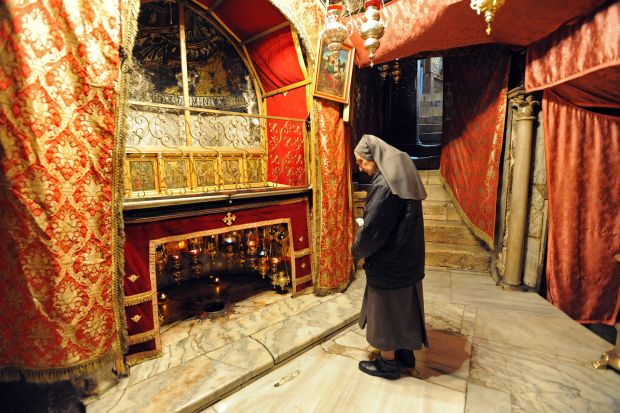 Inside the Church of the Nativity in Bethlehem, a nun prays in front of the star marking the site where it is believed Jesus was born. (CNS photo/Debbie Hill)

BETHLEHEM, West Bank (CNS) –- The ancient Byzantine-style Church of the Nativity marks the birthplace of Christ and is the Holy Land’s oldest church that remains in use for regular worship and liturgy.

Dating to 326, the church is one of the most revered sites in the Holy Land, attracting throngs of tourists eager to step foot into the cave where Mary gave birth.

Located on Manger Square, five miles south of Jerusalem, the church is administered by Roman Catholic, Greek Orthodox and Armenian Orthodox clergy under an age-old agreement that finds each responsible for maintaining certain sections — from lighting specific ornate silver lamps to maintaining certain pillars and mosaics — in precise ritualistic actions.

The original church, dedicated in 339, was built under the direction of St. Helena, the mother of the emperor Constantine who legalized Christianity. Her goal was to establish the church over the cave where Jesus was born, as identified in the year 160 by St. Justin Martyr.

While the Gospels of Matthew, Mark and Luke do not mention a cave as the birthplace of Christ, historians and biblical experts say Justin Martyr’s premise is well founded because many houses in the area were built in front of a cave, which would have been used for stabling and storage. That would explain the availability of the manger in which the infant Jesus slept.

The original church, with its octagonal floor plan, was placed directly above the cave. A 13-foot wide hole surrounded by a railing was part of the design so that pilgrims could peer into the cave.

The original church was demolished and rebuilt around 530 by Justinian the Great, Byzantine emperor from 527 to 565, as part of his drive to recover the empire’s greatness. Portions of the original mosaic floor depicting birds and flowers were preserved and can be viewed through trap doors in the church’s main floor. 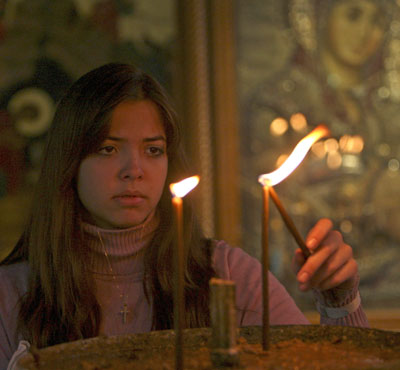 A visitor lights a candle in the Church of the Nativity in Bethlehem. Dating to 326, the church is one of the most revered sites in the Holy Land. (CNS photo/Reuters)

Today, visitors enter the church through the Door of Humility, a small rectangular entrance that dates to the Ottoman period. The doorway was minimized to prevent Ottoman raiders from entering on horseback and pillaging the church. A closer look reveals the massive lintel above the arch, indicating the entrance’s original much taller and wider size.

Entering the wide nave, visitors are taken back in time 15 centuries. The nave is supported by 44 columns, arranged in four rows. Thirty of the columns are embellished with Crusader paintings of saints, Mary and the Christ Child. Poor lighting and age, however, make them difficult to decipher. The columns themselves are made of pink limestone. Most are reused from the original fourth-century church.

Fragments of 12th-century mosaics created by artist Basilius Pictor still adorn portions of the walls high above the columns. Records from 1628 indicate each side once had three sections: the lowest depicting Jesus’ ancestors, the middle containing decrees of provincial and ecumenical councils and the highest showing angels.

Time and the elements have taken their toll on the aged artwork, which are exposed to the extremes of temperature and rain that seeps through the roof, parts of which date to the 15th century. While the Roman Catholic, Greek Orthodox and Armenian Orthodox clergy acknowledge repairs are needed, they have been unable to reach an agreement about how to go about the work.

The church’s main focal point, the Grotto of the Nativity, is reached by a narrow well-worn stone stairway to the right of the main altar. The oval-shaped grotto is quite small and is often filled with pilgrims straining to squeeze inside.

Jesus’ birthplace is commemorated with a 14-point star embedded into the marble floor in 1717 under the Altar of the Nativity, which is maintained by the Greek Orthodox. The Latin inscription in the star reads: “Here of the Virgin Mary Jesus Christ was born.”

The star itself is full of symbolism. Its 14 points stem from the three segments of Jewish history, each composed of 14 generations for a total of 42 generations from Abraham to Jesus. Further, the star is said to represent the 14 Stations of the Cross recounting Jesus’ path to crucifixion and burial.

Much of the grotto’s surroundings date only to 1869, when a fire destroyed its contents but spared the church; only the bronze gates at the north and south entrances date from Justinian’s time.

Nearby is the Chapel of the Manger. Owned by the Roman Catholics, it marks where Jesus slept as a newborn. Bits and pieces of 12th-century mosaics still can be seen on the walls around the chapel.

Connected to the Church of the Nativity and reachable through a door in the north apse is the Church of St. Catherine, built by the Franciscans in 1888. It houses several grottos that can be reached on the right side of the nave. Grottos below are dedicated to the Holy Innocents, St. Joseph and St. Jerome.

The space was used by Christians as burial places as early as the first century. St. Jerome and his follower St. Paula are buried there.

NEXT: Church of the Holy Sepulcher stands at the center of Christianity