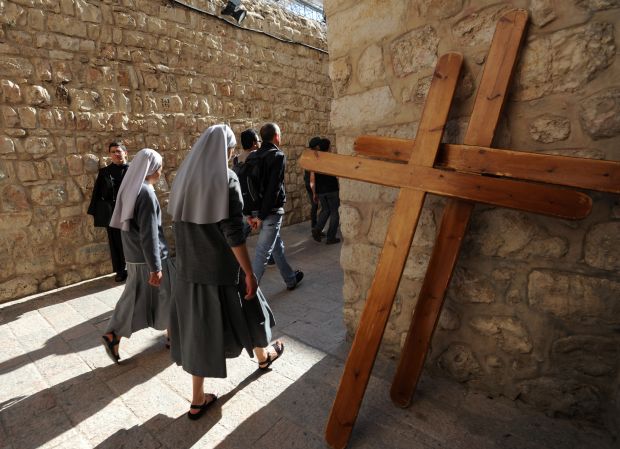 Nuns and pilgrims make their way past crosses along the Via Dolorosa in the Old City of Jerusalem. (CNS photo/Debbie Hill)

WASHINGTON (CNS) — Although the shifting economy sometimes forces people to forgo usual vacations, Catholic tour companies do not seem to feel the impact.

“There’s been an uptick in business even during the height of the recession,” said Steve Gureghian of George’s International Tours, based in San Diego, Calif. “Business has been increasing and we’re not doing anything different, not promoting more, not more advertising.”

Catholic tour agencies not only make all the travel arrangement for pilgrims, but they often facilitate daily Mass and opportunities for other spiritual activities along the journey.

Gureghian noted that in tough economic times, “people aren’t booking trips to Hawaii or cruises to Alaska,” but they make pilgrimages a priority.

“People are still going on pilgrimage, that’s for sure,” agreed Lucille Farrara of Regina Tours, a New York-based company. These groups have regularly scheduled trips to holy sites such as Rome, Fatima, Lourdes and the Holy Land but often arrange special trips based on the group’s wishes.

Emily Borman, who lives in Sterling, Va., has been on two recent pilgrimages to Italy. When she was looking to visit shrines to St. Rita she found out that St. Rita’s Parish in Alexandria was hosting a pilgrimage to visit the town in Italy where the saint lived.

“It was kind of like a God moment,” she described. “I asked my husband, and he made it happen so I was able to go.” She later took her daughter on a trip to Rome to see the holy sites there.

“Pilgrimages are increasing in part because they’ve become a better-known and accepted option,” said George Greenia, a professor at the College of William and Mary and coordinator of its Institute for Pilgrim Studies.

Greenia has been on pilgrimage along the Way of St. James in Compostela, Spain, nine times; the trail leads the way to the town where body of St. James the Apostle is believed to be buried. This pilgrimage route has been popular since the Middle Ages because trips to places like the Holy Land were more costly, time-consuming and dangerous.

Greenia has seen a resurgence of popularity in the Compostela pilgrimage. In a video for the Institute for Pilgrim Studies he said a “vast increase of numbers must be responding to some need that people feel, and it’s that modern explosion in interest in pilgrimage in western Europeans and Americans that is really distinctive.”

Other pilgrimages have become more popular for other reasons: “Italy is popular; it has taken a bump now that we have a new pope, it always does,” said Scott Scherer of Catholic Travel Centre in Burbank, Calif.

Other tour groups hope to benefit from interest in the new pope on a different continent. 206 Tours in New York has an itinerary for Argentina that follows the life of Pope Francis with stops at unrelated holy places as well.

Even secular companies are jumping on the religious travel bandwagon. They offer trips to many of the same destinations as Catholic tour companies and even have broadened their scope to host trips to locations of significance to Protestants.

Many of the Catholic companies, however, are skeptical of the authenticity of religious experience that secular companies can provide. In contrast to those companies, “we think Catholic, we are Catholic and we act Catholic,” said Farrara.

Some Catholic tour group officials said they can offer the connections, experience and commitment to an authentic Catholic experience that the others do not. Greg Hinman of Religious Travel of Globus Family brands based in Denver, Colo., disagreed.

“We have the best of both worlds with the buying power of a large company and a good product that meets the needs of the pilgrims,” he said.

Most of those who participate in pilgrimages are loyal to the company that they’ve toured with before. “Ninety-five percent of our business is referred or repeat,” said Scherer.

“Everyone knows someone who tells us all about their hometown and the things that happened to them there,” said Scherer. When people go on pilgrimage they connect all the stories with the physical places. People say, “Now I know Jesus in a way I never knew before.”

Farrarra similarly emphasized the importance of pilgrimages, quoting St. Augustine, who said, “The world is a book and those who do not travel read only one page.”

NEXT: Church of the Nativity: A walk through Christian architectural history