Movie review: Get On Up 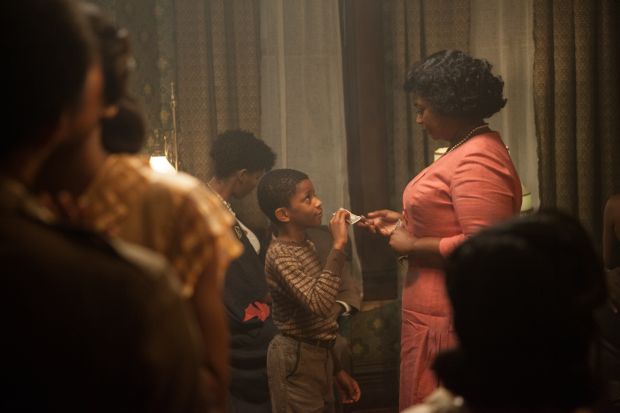 Jamarion Scott and Octavia Spencer star in a scene from the movie "Get on Up."

NEW YORK (CNS) — “Get On Up” (Universal) is director Tate Taylor’s musically compelling yet morally troubling portrait of the “godfather of soul,” singer James Brown (1933-2006).

The film features an impassioned performance by Chadwick Boseman in the starring role. But numerous elements of the famed vocalist’s life story make this recounting of it pungent fare even for adults.

Gifted but volatile, Brown — played as a youth by Jamarion and Jordan Scott — was the product of a troubled and impoverished childhood during which he was deserted by his mother Susie (Viola Davis), knocked around by his angry father Joe (Lennie James) and eventually given shelter in a house of prostitution under the care of its kind-hearted madam, his Aunt Honey (Octavia Spencer).

Jailed as a teenager for petty theft, Brown was rescued by fellow singer Bobby Byrd (Nelsan Ellis), who would go on to become his principal collaborator and long-standing best friend. Brown’s burgeoning career was also nurtured by his good-humored manager and agent, Ben Bart (Dan Aykroyd).

In addition to his outstanding musical legacy, “Get On Up” suggests that Brown was an acute marketer of his own talent who, with Bart’s initially reluctant cooperation, managed to change the rules of record promotion. He was, however, far less successful in navigating his personal relationships.

After a fling with Byrd’s sister, Sarah (Taura Cherne), Brown marries his already pregnant girlfriend Velma (Jacinte Blankenship). But an exchange with Byrd shows that he has no intention of being faithful to Velma. And, indeed, he eventually throws her over for second wife DeeDee (Jill Scott), though where, exactly, in the process he and DeeDee regularize their situation the movie fails to make clear.

A combination of egotism and insecurity also spells trouble for Brown’s professional partnerships, even endangering his bond with Byrd. He becomes increasingly — and sadly — isolated.

Working from a script by brothers Jez and John-Henry Butterworth, Taylor continually intersperses long-term flashbacks with more recent incidents. But this nonlinear structure tends to diffuse the impact of Brown’s biography rather than reinforce it.

The seedy nature of much of the narrative, moreover, while perhaps faithful to reality, suggests that this is not a good cineplex choice for the casual viewer.