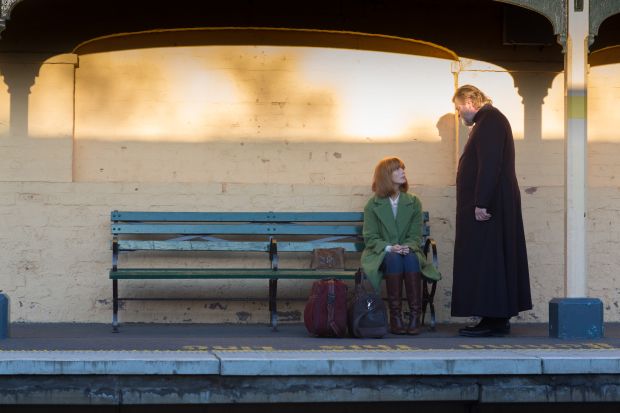 In the confessional, a grown victim of childhood sex abuse by a priest tells Father James Lavelle (Brendan Gleeson), the dedicated pastor of the County Sligo parish where he now lives, that in a week’s time he intends to avenge himself by killing the innocent clergyman.

With the perpetrator of the crimes against him dead, and despairing of being healed by therapy, Father James’ unseen interlocutor reasons that it would be a futile gesture to slay a bad priest. But to take the life of a good cleric, that would certainly be an act that would draw people’s attention.

This opening scene, which establishes the kind of extreme situation that such Catholic authors as Graham Greene or Flannery O’Connor might once have played on, also makes it clear, through the sufferer’s harshly candid description of his experiences, that this is not a film for the summer popcorn set.

Mature viewers prepared for rugged material, on the other hand, will likely consider their investment of time and attention well rewarded.

As writer-director John Michael McDonagh chronicles the seven days that follow Father James’ life-threatening encounter, we learn that this thoroughly decent but otherwise ordinary man of the cloth is a widower and father ordained after his wife’s death. This aspect of his past is revealed when his emotionally fragile, Dublin-based daughter, Fiona (Kelly Reilly), comes to town, looking for his support in the wake of a romantic crisis.

Along with nurturing Fiona, Father James also tends to the varied needs of the errant or merely eccentric souls who make up his small flock.

They include Jack (Chris O’Dowd), the local butcher, a wronged husband who’s not overly anxious to reconcile with his wife, Veronica (Orla O’Rourke); Michael (Dylan Moran), a shady business tycoon out to use a donation to the church to assuage his conscience; Frank (Aiden Gillen), an atheist doctor who has nothing but contempt for believers; and Gerard (M. Emmet Walsh), an elderly expatriate American novelist who hopes to evade a lingering end by committing suicide.

They’re a challenging lot, but Father James does his best with each. Less laudable is his response to the plight of socially awkward, sexually frustrated bachelor Milo (Killian Scott). Unsettlingly, Father James advises Milo to move to a city where he’ll probably find the girls more open to his casual advances.

As with an exchange in which Father James and his weasel-like curate, Father Timothy (David Wilmot), discuss the content of a parishioner’s recent confession far too openly, this off-kilter interaction with Milo may raise the hackles of Catholic moviegoers. At least in the case of the penitent, however, there are extenuating pastoral circumstances.

Such incidental flaws notwithstanding, overall, McDonagh is mostly respectful, if unsparing, in his treatment of the contemporary church as he ably explores a range of hefty themes — faith, moral failure, reconciliation and sacrifice among them.

He’s sustained throughout by Gleeson’s memorable performance during which we watch Father James display understandable uncertainty about how to respond to the existential threat confronting him. Should he arm himself? Involve the police? Flee the vicinity until the danger has past? Or should he offer himself in Christ-like expiation for the sins of others?

Watching him decide makes for thoughtful drama, though the demands of the process mean that the appropriate audience for “Calvary” remains a narrow one.

PREVIOUS: Movie review: Get On Up

NEXT: Movie review: The Hundred-Foot Journey