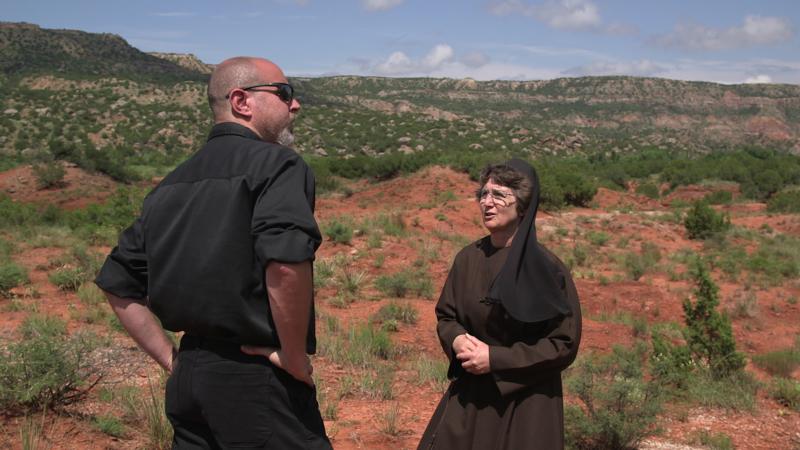 Deacon Pedro Guevara-Mann, producer and host of a six-part series called "Creation," speaks with Franciscan Sister Damien Marie Savino, on a filming site at Palo Duro Canyon, Texas. Sister Damien is the chair of the Department of Environmental Studies and Sciences at the University of St. Thomas in Houston. (CNS Photo/Courtesy Salt and Light Catholic Media Foundation)

WASHINGTON (CNS) — God may have needed just six days to make all of creation, but for the new video series “Creation,” well, it took a bit longer.

And then came word that Pope Francis was writing an encyclical on the environment, which turned out to be “Laudato Si’,” issued last June.

“We thought, ‘Can we time it?’, Deacon Guevara-Mann told Catholic News Service from Salt and Light’s studios in Toronto, noting the Canadian Catholic cable channel wanted to be able to have its episodes coincide with the encyclical’s release. “When we found out it was coming out in June, we said, basically, let’s put the pedal to the metal. But we were able to have only the first three done.”

But “Laudato Si'” proved to be a great boost for interest in “Creation,” the deacon said. The initial three episodes premiered in June to dovetail with the encyclical. “We cracked down on the last three last year,” he added, which allowed Salt and Light to present them in late November and early December, as the world’s gaze was shifting to the world climate summit in Paris.

“It was such a huge project,” Deacon Guevara-Mann told CNS. “Try to compile all the teachings of the church — St. Bonaventure, (St. Thomas) Aquinas, St. Gregory of Nyssa, anyone, that includes all the social justice teaching — especially when you’re trying to distill everything into six half-hours.”

And take into account the fact that “we didn’t used to have an encyclical” when the project started, he added. “We had another pope,” Benedict XVI. “He was called ‘the green pope.’ He was the one who put the solar panels on the Paul VI audience hall” at the Vatican, Deacon Guevara-Mann said.

In assembling the series, “we tried to make it appealing to everyone as possible. We didn’t just speak to Catholics, we speak to biologists, zookeepers, shrimpers, obstetricians, waste management people, farmers. … Some are Christian, some are Catholic, some are nothing,” he added. “If we think there’s an ecological problem, it cannot be solved just by politicians. All these voices have to come together in dialogue. That’s how we come up with viable solutions. ”

Feedback on “Creation” has been positive. “It’s just really beautifully shot — that’s the first thing people say about it,” Deacon Guevara-Mann said. “Press coverage has been very favorable,” he added, including from secular media.

“Even when I talk to secular people about it, they’re like, ‘Yeah, the church has something to say about that.’ I don’t have to explain it.”

NEXT: Wisecracking polar bear goes south on a mission in ‘Norm of the North’