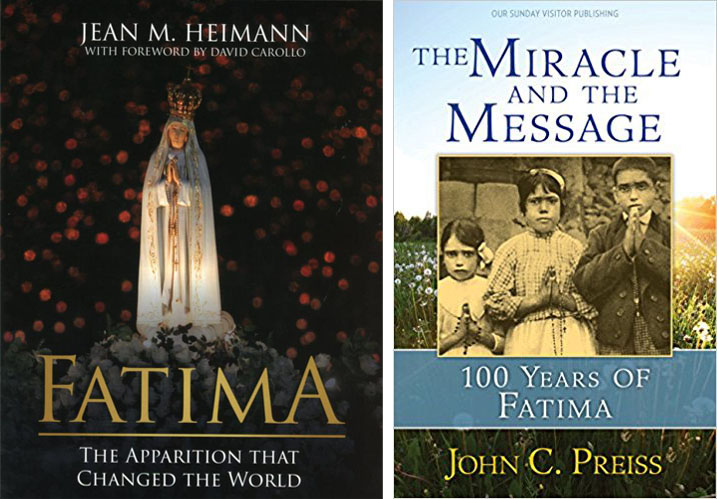 The year 2017 marked the 100th anniversary of the apparitions in Fatima. There has been a small deluge of publications to honor the occasion. These two short, picture-filled books show signs of being rushed to publication.

In one, color photographs are scattered throughout the text but not labeled, but listed by page and subject at the end of the book. In the other book, photographs are printed together after the written text. As many of the photographs depict Lucia, the only visionary to live into adulthood, and several popes, it is not hard to guess the subject of most of the pictures. But the reader should not be required to guess.

Most Catholics know the broad outlines of the Fatima story: three peasant children in a remote corner of Portugal had visions of Mary, the mother of Jesus, and she revealed secrets to them. One of those secrets most believe was that a pope would be attacked and would be spared by the intervention of Mary.

The broad outlines obscure the true significance of the seven apparitions that took place in 1916 and 1917.

The three children were Lucia dos Santos, who was 9 at the time of the first three apparitions, and her two cousins, Jacinta and Francisco Marto, age 6 and 8. The first three were apparitions of a young man bathed in light, perhaps an angel. They came in the spring, summer and fall of 1916. They were preparatory visits for the Marian appearances in 1917.

But, in a sense, the first prayer of the angel given in the first appearance is the essential message of Fatima: we should pray constantly and pray for those who do not believe.

On May 13, 1917, Mary appeared to the three children. She asked the children to come on the 13th day of the next five months at the same hour. A month later Mary told the children she wanted to encourage devotion to the Immaculate Heart of Mary. About 70 people came to this June event. On July 13, Mary showed the children a vision of hell and told them she would later ask for the dedication of Russia to her Immaculate Heart. She shared a secret in three parts that the children were not to disclose to anyone.

By now word about the three visionaries had spread and 4,000 people came to this appearance. Officials became alarmed as Portugal was now officially a secular state where the practice of religion was discouraged.

The growing attention led officials to kidnap the children, so they would not be in Fatima on Aug. 13. They were released after that day and Mary appeared to the three at a new place on Aug. 19. She promised the children that on Oct. 13, she would create a miracle to prove her appearances. The September visit would attract nearly 30,000 people and she promised again to create a miracle the next month.

On Oct. 13, she bid the children and all the world to pray the rosary regularly and to practice the devotion of reparation on the first Sundays of the month. Mary also requested a chapel dedicated to her at Fatima. An estimated 100,000 people witnessed the miracle of the sun where Mary appeared in brilliant light and the sun zigzagged across the sky and then appeared to be hurtling toward Fatima. Terrified people fell to their knees in the muddy field. The experience lasted 10 minutes.

Only Lucia would hear all the secrets; Jacinta only one. Francisco saw all the apparitions but heard nothing. Mary told the children that Jacinta and Francisco would die soon and only Lucia would live into adulthood. Francisco died the next year in the influenza epidemic of 1918. Jacinta died Feb. 20, 1920, of tuberculosis.

Lucia would continue to have visions of Mary through the 1920s. She became a nun in part to free her from the devouring attention of the press. She never gave an interview and the documents she wrote over several decades were at the request of her superiors. Lucia lived until 2005 and claimed that, by that time, all the secrets had been revealed (she had been accused of withholding some).

Fatima is a fascinating story, but the books seemed to have been published to push a conservative, almost 19th-century vision of Mary and the devotions accorded her. The power of the story of this story lies in the wonder and faith it inspires in the witness of these brave children to the power of faith and prayer.

Yearley has earned two degrees from the Ecumenical Institute of St. Mary’s Seminary in Baltimore and is now working on a doctorate in ministry from that institution.

PREVIOUS: God’s Not Dead: A Light in Darkness