‘The Words’: A talky film for literature lovers 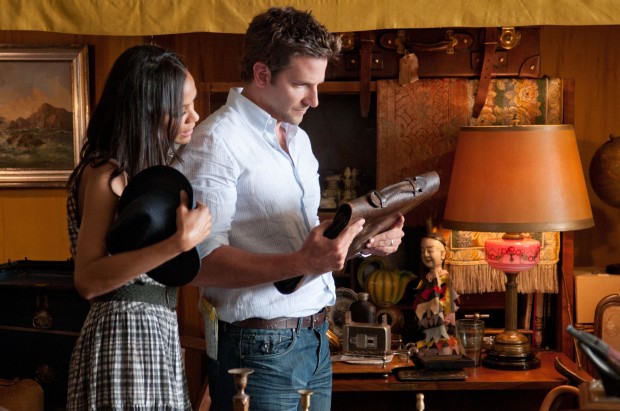 NEW YORK (CNS) — Right up to its ending, “The Words” (CBS) is a pleasing rumination on moral choices. Then, after a full 93 minutes of illustrating and explaining ethical ambiguity, the filmmakers let their star-laden fable lurch to close with a finish likely to please no one.

Mary McCarthy once said of her novels that she took real plums and put them into an imaginary cake. “The Words” deals with struggling novelist Rory Jansen (Bradley Cooper), who happens across an entire truckload of someone else’s plums. He claims them as his own, publishes them to great renown, then — awkward! — comes face to face with the man to whom they belonged in the first place.

Since this is an artsy work, said author, played by Jeremy Irons, is known simply as the Old Man.

Brian Klugman and Lee Sternthal, who co-wrote and co-directed, know how to hit all the gratifying flashback notes. Jansen finds the stunning romantic novel of postwar Paris in a battered briefcase his wife Dora (Zoe Saldana) bought there on their honeymoon.

In reading the manuscript, the narration ponderously informs us, Jansen was “confronted by everything he ever appeared to be and the reality of what he would never become.”

The story unfolds in a three-tiered frame, beginning with novelist Clay Hammond (Dennis Quaid) reading from his book about the deception, and including the Old Man’s bitter recounting of his life story to the stunned Jansen.

Ernest Hemingway references abound — as a reminder that all good fiction originates with suffering. That sentiment notwithstanding, the Paris scenes are postcard perfection.

Jansen knows he has to make a choice when he encounters the Old Man. But the filmmakers, coming from an industry where the theft of ideas is more common than it is for fiction writers, muddy their resolution and cheat a bit.

To elucidate whose story this really is, there’s a postlude with Hammond explaining to flirtatious graduate student Daniella (Olivia Wilde) how novelists plunder their own lives.

This talky drama is just the thing for those yearning to don tweed and corduroy, sip red wine and discuss literature on rainy nights.

The film contains two premarital situations as well as occasional profane and crude language. The Catholic News Service classification is A-III — adults. The Motion Picture Association of America rating is PG-13 — parents strongly cautioned. Some material may be inappropriate for children under 13.

NEXT: ‘Screwtape Letters’ coming to stage in Philadelphia