Even daddy vampires love their daughters 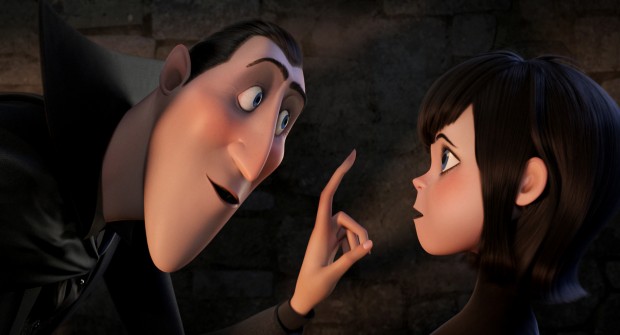 Animated characters Dracula, voiced by Adam Sandler, and Mavis, voiced by Selena Gomez, are seen in the movie "Hotel Transylvania." The Catholic News Service classification is A-II -- adults and adolescents. The Motion Picture Association of America rating is PG -- parental guidance suggested. Some material may not be suitable for children.(CNS photo/Columbia)

NEW YORK (CNS) — We are used to fables of humans fleeing from spooky ghouls and ghosts, but what if they were as scared of us as we are of them?

That is the premise of animated comedy “Hotel Transylvania” (Columbia) — an enjoyable, if slightly rude, pro-family romp in which the infamous Count Dracula (voiced by Adam Sandler) has established a “monsters only” resort to provide a safe haven for spooks to relax away from the torches and pitchforks of their antagonists.

In the midst of running the popular getaway, Drac invites his fellow fiends over to celebrate his headstrong daughter Mavis' (voice of Selena Gomez) 118th birthday.

The (relatively) young Mavis, however, has other things on her mind and wants to escape the confines of the hotel and explore the outside world. Yet her father, having lost his wife many years before, is keen to protect her from being contaminated from the mortal world, going so far as lying to make her believe that humans are nothing but evil ne'er-do-wells.

So when skateboarding backpacker Jonathan (voiced by Andy Samberg) stumbles upon the hotel by accident, the birthday girl's interest is heightened and the caped protagonist must scramble to hide Jonathan's humanity from both his guests and his intrigued offspring.

Director Genndy Tartakovsky's goofy comedy gets many of its laughs from playing on, and updating, classic horror characters. So we have a loveable working class Frankenstein (voice of Kevin James) and the overworked data processing werewolf Wayne (voiced by Steve Buscemi) who is being constantly nagged by his 50 children. Unfortunately, in spite of these clever twists, the picture dips its toes into the swamp of vulgarity a few times along the way to pick up a few easy laughs.

Yet while Peter Baynham and Robert Smigel's screenplay has its fair share of mildly rude flatulent humor, it also contains a striking pro-family theme in Dracula's touching relationships with his daughter, and his deceased wife over whom he is still grieving. Therefore amid the silliness come some very moving moments that will have Catholic viewers nodding in approval, as well as a conclusion that affirms the value of the family unit.

However, scary incidents that include zombies skulking around on fire, along with some mildly upsetting moments and the aforementioned gross humor, may exclude younger audiences from the party.

The film contains occasional mild scatological humor and a few scary scenes. The Catholic News Service classification is A-II — adults and adolescents. The Motion Picture Association of America rating is PG — parental guidance suggested. Some material may not be suitable for children.

PREVIOUS: How Aristotle would look at today’s parenting challenges

NEXT: ‘Looper’ shows violent future; logic is a casualty, too