‘Looper’ shows violent future; logic is a casualty, too 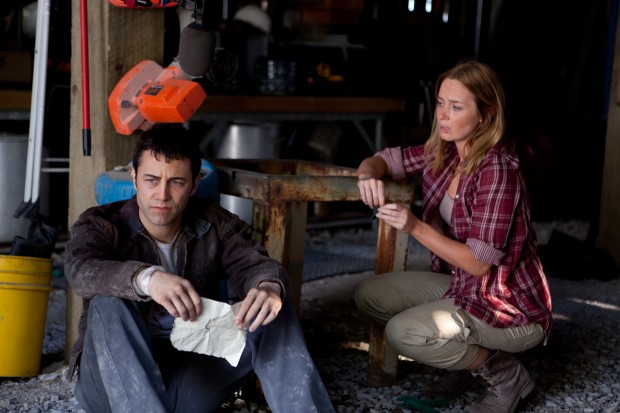 NEW YORK (CNS) — In the dystopian distant future — and in science fiction, and especially “Looper” (FilmDistrict), dystopian is all there is — there will be time travel, but it will be illegal, so only criminals will utilize it.

Dang. In the near future, though, all cars will be electric, we'll have cool flying motorcycles, a genetic mutation will make telekinesis sort of commonplace, and we'll still rely on our trusty firearms on the remote prairie.

Our present selves also will be able to co-exist in the same space-time continuum with our future selves, which sounds like a stretch of Einsteinian theory, but without it, there'd be no plot to this picture, so just play along, why don't you.

In 2044, there's a group of paid assassins for organized crime called Loopers. Mobsters from 30 years or so from that year send back their victims to a designated piece of canvas, and with one shot from the Looper's blunderbuss, those people have ceased to be in the future, and can be easily disposed of in the past.

This works out neatly except for those pesky situations when the murder victim is the older version of the Looper. That's when Old Joe (Bruce Willis) knocks out Joe (Joseph Gordon-Levitt) with a single punch and flees into a cornfield on a mission of vengeance. That's called “letting your loop run,” and the mobsters, led by grizzled Abe (Jeff Daniels), get very upset when this occurs and send people to shoot the assassin.

Old Joe is angry because a telekinetic supervillain of the distant future known only as The Rainmaker has killed his wife (Summer Qing), who provided him with the only love he'd ever known. Armed with a few scribbled clues and a map, he's looking for the child who became The Rainmaker, knowing that once that child is dead, his wife will never have been killed.

Joe is in pursuit of Old Joe and also in defense of Sara (Emily Blunt) and her preschool son, Cid (Pierce Gagnon), on their farmhouse. A showdown is a-comin', pardner, and all that's missing is the theme song from “High Noon.”

Director-writer Rian Johnson has produced a mix of science fiction and old-time Western that looks to have been concocted by a couple of 13-year-old boys with little consideration of logic but an endless supply of “What if this happened?” twists. Children as victims of violence make this story particularly upsetting.

NEXT: Comic actor Kevin James wants to ‘glorify God in every way’