Exploring the power of words as catalyst for controversy 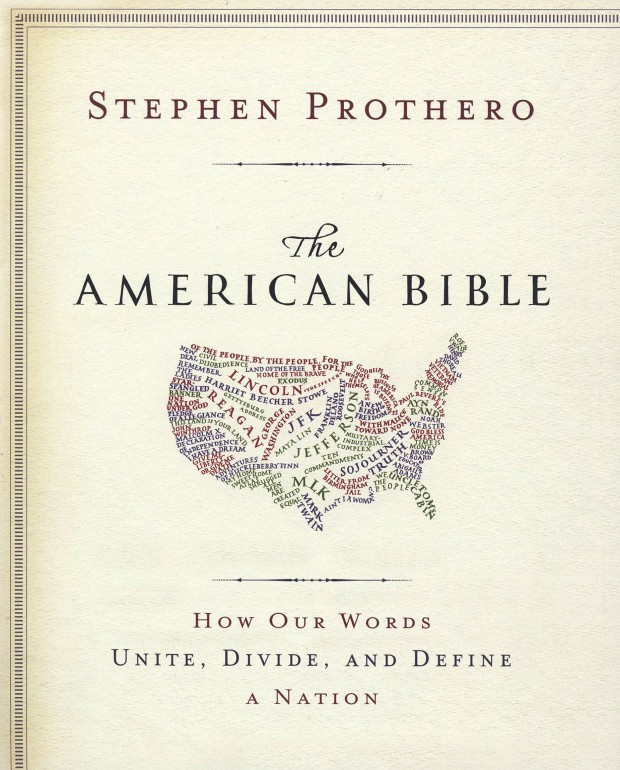 Stephen Prothero, a professor of religion at Boston University, has compiled diverse texts and genres — song lyrics, letters, legal documents, essays, proverbs and fiction — into an American bible, a canon to illustrate our short but contentious history.

Prothero’s bible is an abbreviated version of the Christian one: Genesis, Law, Chronicles, Psalms, Proverbs, Prophets, Lamentations, Gospels, Acts and Epistles. The documents he has chosen cluster logically in these books: early documents in Genesis, fiction in Chronicles, song lyrics in Psalms and letters in Epistles. Within each book he mixes documents from different times and different authors.

Prothero’s criteria for inclusion is that a text must have “served as a catalyst for later controversy.” Each of these documents had, and have, an afterlife, and illustrate how “the American people talk back, agreeing, disagreeing, or in some cases creatively misreading what their forebears have said.”

Prothero introduces each text with a concise explanation of its author, context and influence on our national conversation. We are able to read the original document (in full or as illustrative excerpts) and so gain a better sense of how honestly and accurately it has been interpreted. Finally, there are pages of commentary that illustrate how the text has been used — or misused.

The format of the book makes it a wonderful resource for a history class, debate team or book club. The cacophony of the American voice would overwhelm anyone who attempted to read it straight through. It is better to read it slowly, one biblical book at a time, carefully listening to the commentaries elicited by the text. Reading slowly allows us to participate in this “heritage of voices as deep and high and different as the Mormon Tabernacle Choir and the Boys Choir of Harlem.”

The melding of text and commentary is the book’s most distinctive focus: it shows, rather than tells us, what the American conversation has been. But it is also the area where we have to trust the editor — who, like all of us, has his own political and religious biases, whether they are made explicit or not. This is not a reason not to read this valuable book, but simply to be aware that this is an edited book.

The range of authors is remarkable; any book that includes Sen. John Kerry, Rep. Henry Hyde, Wendell Wilkie, William Faulkner, W.E.B. DuBois, Sarah Palin and Daniel Webster (to name just a few participants in this national conversation) deserves to be called catholic, in the sense of universal. It is surprising, though, to find so few Catholic voices (why Father Charles Coughlin and Mary Daly and not Cardinal Joseph Bernardin and Dorothy Day?) It is a particularly disappointing omission because the church has given deep thought to the common good, which is really Prothero’s subtext.

The inclusion of voices of reason, instead of polemics, could have shown a way to ameliorate the partisanship that “The American Bible” rightly rejects. “What ails us is not just a matter of the words we choose or the tone we adopt. There is also the matter of our collective amnesia. The chain of memory linking us to the great voices of our collective past … has been broken.”

“The American Bible” can help restore that chain of memory. It isn’t a perfect book, but it’s good enough for a less than perfect experiment in democracy.

Linner, a freelance writer and reviewer, has a master’s in theological studies from Weston Jesuit School of Theology.