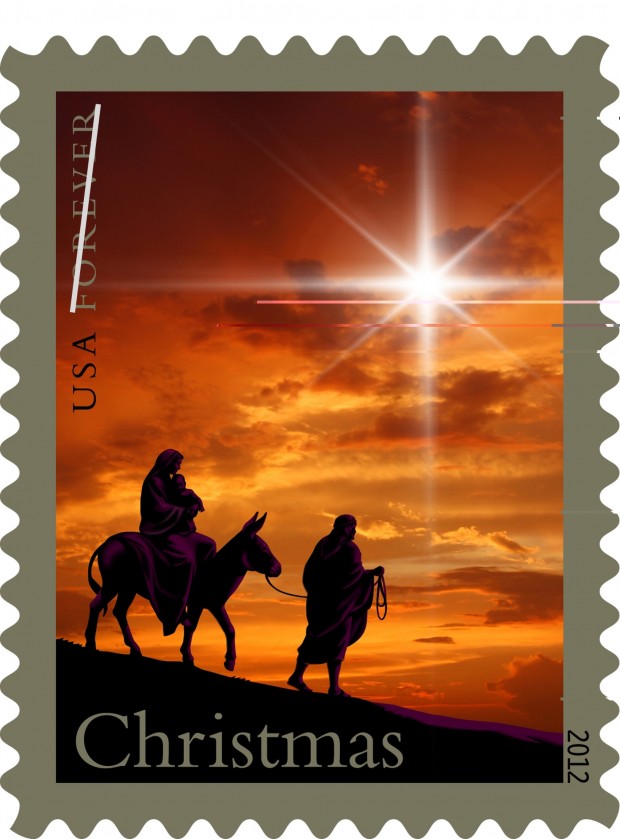 A ceremony to celebrate the first day of issue of the stamp took place at the Washington National Cathedral of the Episcopal Church.

The portrayal of the Holy Family is a change from the traditional image of Madonna and child used almost every year since the first Christmas stamp was issued in 1962.

Louis Guiliano, a member of postal service’s Board of Governors, took a moment at the ceremony to acknowledge the reason for the 50-year tradition of religious stamps.

“The primary reason for Christmas is to celebrate the birth of Christ,” he said.

Since 1962, the religious stamp has been coupled with a secular one, featuring items such as tree ornaments, evergreens, or nutcrackers.

The religious stamps have been mostly classical works of art depicting Mary and the infant Jesus. This year, Giuliano said, the board decided to go with a different portrayal for the stamp, one he calls more contemporary. It is based on a passage from the Gospel of St. Matthew: “Out of Egypt I call my Son.”

Giuliano predicted the more contemporary art will appeal to a broader audience.

The first-day-of-issue ceremony took place in the Bethlehem Chapel, the first chapel completed in the National Cathedral.

The Rev. Gary Hall, the cathedral’s dean, thanked to the postal service for creating the stamp.

NEXT: Exploring the power of words as catalyst for controversy