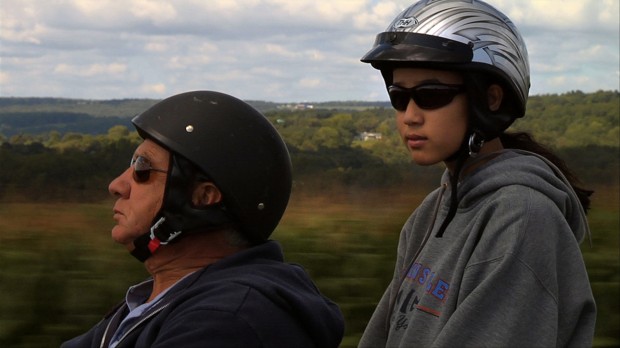 Ann Boccuti of Lansdale, a subject of a new film exploring adoption of Chinese girls by white Americans, joins her father on a motorcycle ride. 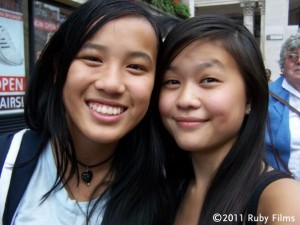 Ann Boccuti of Lansdale, Pa. (left) and Haley Butler of Nashville, Tenn., two of the four Chinese girls adopted as infants and subjects of the new film, “Somewhere Between.”

NEW YORK (CNS) — Happily ever after can be an elusive goal when it comes to international adoptions, as the documentary “Somewhere Between” (Long Shot Factory) explains.

Eighty thousand Chinese children, most of them girls, have been adopted in the United States since 1991, when China — which imposed a strict, morally unacceptable “one child” law in 1979 — loosened adoption procedures. They’re mostly girls because in China, tradition requires the son to take care of elderly parents. This puts girls without brothers at risk, and that’s especially so for girls in poor families.

The film by Linda Goldstein Knowlton, herself the mother of an adopted child from China, explores what occurs in adolescence when adoptees, who are seldom, if ever, actual orphans, want to be in touch with their original culture and, if possible, their birth parents. How do they re-connect?

Knowlton’s film is an unvarnished look at the awkwardness involved, mostly using the words of the adoptees themselves, all now part of white or mixed-race families. She follows four teen girls: Fang “Jenni” Lee of Berkeley, Calif.; Haley Butler of Nashville, Tenn.; Ann Boccuti of Lansdale, Pa.; and Jenna Cook of Newburyport, Mass.

All are shown to live happily and comfortably in the United States, although they also good-naturedly mention that they’ve encountered racist remarks at school. Sometimes they refer to themselves as “bananas” (yellow on the outside, white on the inside) or “scrambled eggs.”

The value of adoption, and each family’s reason for choosing adoption, are not explored. The question under consideration is what kind of identity these girls intend to have as adults.

They’re Chinese and they’re American, but they’re not Chinese-American, so they can feel rootless. “Whether I’m in America or China, they know I’m a foreigner,” Lee explains.

Lee and Butler speak Chinese and make connections to their homeland — Butler to her birth parents and Chinese siblings, Lee to the Dai people of southwest China from which she springs. Lee also helps her family adopt a disabled Chinese child. Boccuti, adopted as an infant, and Cook express less curiosity.

All the families are active in Chinese Adoption Links International, a support organization. There’s also a scene with a spokesman for United Adoptees International, a group that opposes all international adoptions. Korean adoptees, particularly, it seems, have been told they’re orphans but have been found to have falsified records.

Only in Butler’s life is religion a prominent factor. She is an aspiring musician whose family belongs to an evangelical church — and who sport an anti-abortion/pro-adoption bumper sticker on their minivan.

“People tell me I’m lucky to live in America,” she says. “I am really lucky — but something bigger had something to do with that.”

Visiting China, the Butlers have an emotional, somewhat unsettling, meeting with Haley’s birth family in their hotel room.

“They’re religious — they believe in Christianity,” the translator explains.

Jeannie Butler, the adoptive mother, keeps her questions simple, but comments: “We wanted to know who abandoned her.”

The answer turns out to be complicated, since Haley’s original family, without the means to support the girl, gave her to relatives, who then deposited her at the orphanage. After the birth mother bursts into tears at the sight of the girl, why, viewers may wonder, put her through an interrogation?

Knowlton’s documentary should be mandatory viewing for anyone considering an international adoption.

The film contains mature themes. The Catholic News Service classification is A-II — adults and adolescents. Not rated by the Motion Picture Association of America.