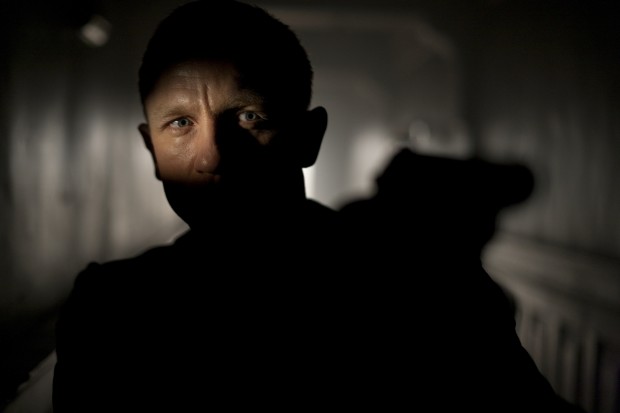 Daniel Craig stars as James Bond in a scene from the movie "Skyfall." (CNS/Columbia Pictures)

NEW YORK (CNS) — Don’t be misled by the Chicken-Little title, “Skyfall” (Columbia) is high-flying entertainment, a rousing return for James Bond and a much-needed injection of vitality into the 50-year-old film franchise built around him.

It’s not all fluff, as the script, by Neal Purvis, Robert Wade and John Logan, is thoughtful and character-driven, raising issues of loss, responsibility, patriotism and loyalty amid the battle of good vs. evil.

“Skyfall” opens in familiar territory: Bond (Daniel Craig) is in Istanbul, chasing a bad guy who has stolen a computer disc containing the identities of every secret agent in the world. At his side is field operative Eve (Naomie Harris), who proves as handy with a straight razor as she is with a rifle.

The crime is big trouble for “M” (Judi Dench), the head of British intelligence unit MI6. It was M herself who lost the disc, and its theft proves the perfect excuse for rival government official Gareth Mallory (Ralph Fiennes) to challenge M’s competence, force her retirement, and shake things up at the agency.

“It’s a young man’s game now,” Mallory tells Bond, tipping his hope — as the new century progresses — to rely more on cyber technology than spies on the ground.

Trouble is, neither Bond nor M is quite ready to pack it in. Aided by the new “Q” (Ben Whishaw), a computer genius, they redouble their efforts to solve the robbery as its malignant mastermind orchestrates a reign of terror across London.

Called Silva (Javier Bardem), said villain is a sleazy megalomaniac (naturally) who seeks world domination (of course). In a twist, Silva is a disgraced former agent with unique knowledge of M’s past, which fuels his desire for revenge.

At Silva’s side is the exotic Severine (Berenice Marlohe), who warns Bond to be very, very afraid. But 007 pours on the charm (“It takes a certain type of woman to wear a backless dress with a Beretta 70 strapped to her thigh”), and Severine rethinks her loyalties.

The search for Silva is a scenic one, sending Bond to Shanghai and Macau, as well as the depths of London’s underground and the Scottish highlands.

The violence quotient is undeniably high in “Skyfall,” but no more so than is typical for a Bond film, which always seems to involve new and creative ways to blow things up and kill baddies with “style.”

The film contains scenes of intense action violence and torture, implied nonmarital sexual activity, mild sensuality and innuendo as well as some profane and rough language. The Catholic News Service classification is A-III — adults. The Motion Picture Association of America rating is PG-13 — parents strongly cautioned. Some material may be inappropriate for children under 13.

NEXT: ‘Lincoln:’ Blockbuster movie of the season