‘Lincoln:’ Blockbuster movie of the season 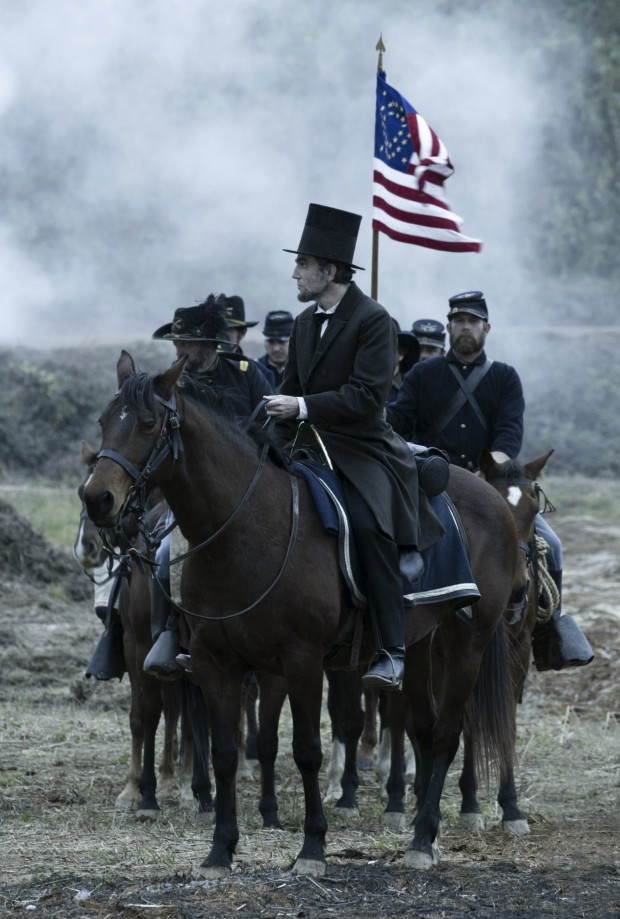 Actor Daniel Day-Lewis portrays U.S. president Abraham Lincoln in a scene from the movie “Lincoln.” The Catholic News Service classification is A-III — adults. The Motion Picture Association of America rating is PG-13 — parents strongly cautioned. Some material may be inappropriate for children under 13. (CNS/DreamWorks)

NEW YORK (CNS) — With the unsurprising exception of Jesus Christ, more books are said to have been written about President Abraham Lincoln (1809-1865) than about any other person in history.

As for the screen, our most fascinating — and arguably greatest — chief executive has been portrayed by such Hollywood luminaries as Walter Huston (“Abraham Lincoln,” 1930), Henry Fonda (1939’s “Young Mr. Lincoln”) and Raymond Massey (“Abe Lincoln in Illinois,” 1940).

Those estimable names notwithstanding, it’s hard to imagine that any actor has ever inhabited the persona of the legendary rail-splitter quite as convincingly as Daniel Day-Lewis does in director Steven Spielberg’s splendid historical drama “Lincoln” (DreamWorks). Day-Lewis’ bravura performance is undeniably the highlight — though by no means the only asset — of this engrossing profile.

The plot focuses on the Civil War president’s passionate yet wily struggle, during the closing days of that conflict, to steer a constitutional amendment abolishing slavery through Congress. Aided by his secretary of state, William Seward (David Strathairn), but distracted by his troubled personal life — Sally Field plays his famously high-strung wife, Mary — Lincoln uses rhetoric to win over his hesitant Cabinet and patronage to woo his congressional opponents.

As for the Great Emancipator’s ostensible allies on Capitol Hill, irascible Rep. Thaddeus Stevens of Pennsylvania (a marvelous Tommy Lee Jones) hurls withering sarcasm at all and sundry and openly avows his mistrust of Lincoln.

Whether in line with history or not, a scene showing Stevens sharing his bed with his mixed-race housekeeper presents a curious moral quandary: Assuming that they could not marry by law, but would have tied the knot if permitted to, the guilt, if any, attaching to their relationship must have been considerably mitigated by the force of unjust circumstances.

Along with the tension created by Mary’s neurotic behavior, Lincoln is also burdened by grief over the untimely death of his son Willie two years before the events of the movie. Though not especially close to his oldest son Robert (Joseph Gordon-Levitt) — whose intense desire to join the Army poses a threat to Mary’s sanity, and thus presents his father with a terrible dilemma — Lincoln dotes on his youngest child, Tad (Gulliver McGrath). Like the Lincoln marriage, however, their touching bond is tinged by the tragedy of Willie’s absence.

The trajectory of Spielberg’s tale is, by its nature, uplifting, while Lincoln’s multifaceted personality — which encompassed idealism, political shrewdness, melancholy, humor and even a few endearing foibles — is vividly illuminated in Tony Kushner’s screenplay. As his script reveals, however, Lincoln was not above telling an earthy anecdote if it advanced a point he wished to make, nor were those around him too refined to employ vulgarity for the sake of emphasis from time to time.

Still, some parents may consider the educational value and moral import of the film — which is based, in part, on Doris Kearns Goodwin’s 2006 book “Team of Rivals: The Political Genius of Abraham Lincoln” — sufficient to overcome the elements listed below, thus allowing for patronage by older adolescents.

The film contains intense but mostly bloodless battlefield violence, a scene involving severed limbs, cohabitation, about a dozen uses of profanity, racial slurs, a couple of rough terms and occasional crude and crass language. The Catholic News Service classification is A-III — adults. The Motion Picture Association of America rating is PG-13 — parents strongly cautioned. Some material may be inappropriate for children under 13.

NEXT: With ‘Breaking Dawn 2,’ Twilight saga comes to an undead end