As a Christmas movie gift, ‘Les Miserables’ has it all 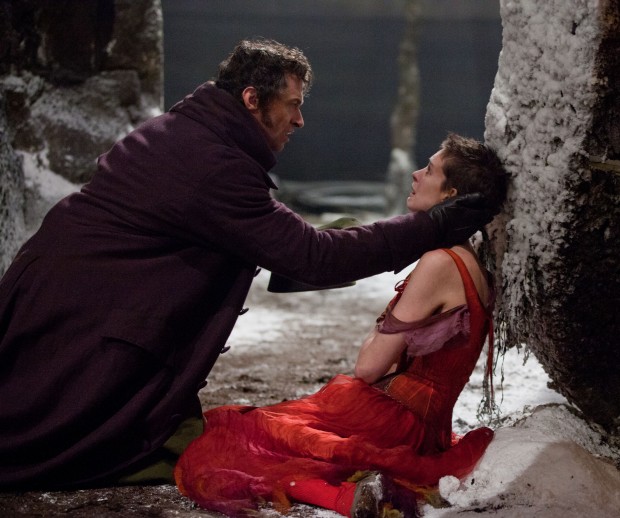 Hugh Jackman and Anne Hathaway star in a scene from "Les Miserables," the big-screen adaptation of the long-running stage show. (CNS photo/Universal Studios)

This rousing entertainment offers something for everyone: soaring anthems, tear-jerking romance, thrilling drama — and a positive portrayal of the Catholic faith.

In fact, this faithful adaptation of the Victor Hugo novel, which was transformed into a worldwide stage sensation by impresario Cameron Mackintosh, is a deeply moral story. Characters rise and fall calling on God for grace and mercy, seeking personal redemption while trying to better the lives of others.

As the central character, ex-convict Jean Valjean (Hugh Jackman), comes to realize, “To love another person is to see the face of God.”

Director Tom Hooper (“The King’s Speech”) paints with an enormous brush and “Les Miserables” is staged on an epic scale, overstuffed with grand set pieces and hundreds of extras. Hooper’s fondness for extreme close-ups heightens the emotional wallop, and will likely send some viewers scrambling for tissues.

The labyrinthine story spans two decades in post-revolutionary France and revolves around three characters: Valjean, who breaks his probation and seeks a fresh start; Inspector Javert (Russell Crowe), obsessed with finding Valjean and bringing him to justice; and the doomed Fantine (Anne Hathaway), who sacrifices everything for the care of her out-of-wedlock daughter, Cosette (Isabelle Allen).

The kindness of a Catholic bishop (Colm Wilkinson) convinces Valjean to amend his life. Over time, he changes his identity, becoming the benevolent mayor of a village and a factory owner. When Fantine is unjustly fired from his factory and forced into a life of prostitution, Valjean steps in, promising the now-dying woman that he will raise Cosette as his own.

Cosette has been living with the Thenardiers (Sacha Baron Cohen and Helena Bonham Carter), wicked tavern owners and professional pickpockets. Their collusion with Javert makes for a narrow escape for Valjean.

Years pass, and Cosette has blossomed into a refined young woman (Amanda Seyfried). On a Paris street she meets a young revolutionary, Marius (Eddie Redmayne). It’s love at first sight, much to the chagrin of fellow rebel Eponine (Samantha Barks), who happens to be the Thenardiers’ daughter.

Can Cosette and Marius’ love survive the rising tensions of the mob, as streets are barricaded and weapons drawn? Is Javert closing in on Valjean at long last? “Les Miserables” barrels along to a satisfying climax that is profound in its endorsement of the power of faith.

With little spoken dialogue and 50 songs from composer Claude-Michel Shonberg, and lyricist Herbert Kretzmer, “Les Miserables” is more opera than musical. Fortunately the actors’ pipes are up to the challenge, especially Hathaway, whose heartbreaking rendition of the signature tune, “I Dreamed a Dream,” is sensational.

The film contains scenes of bloody violence, a prostitution theme, and nongraphic nonmarital sexual activity. The Catholic News Service classification is A-III — adults. The Motion Picture Association of America rating is PG-13 — parents strongly cautioned. Some material may be inappropriate for children under 13.

PREVIOUS: ‘Hitchcock’ shows the madness behind the genius of the man

NEXT: ‘Will Many Be Saved?’ Good question, but book’s answers hard to grasp