‘Hitchcock’ shows the madness behind the genius of the man 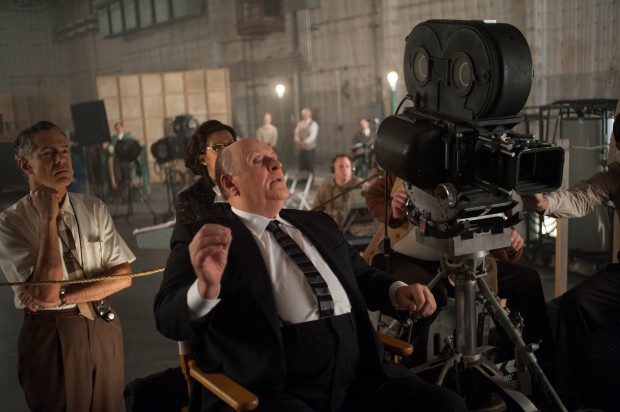 NEW YORK (CNS) — The Greek philosopher Aristotle observed, “There is not great genius without a mixture of madness.” Case in point: “Hitchcock” (Fox Searchlight), an absorbing portrait of the legendary film director during the making of his biggest success, the 1960 horror classic “Psycho.”

The “Master of Suspense” gets quite a dressing-down in this adaptation of Stephen Rebello’s 1990 book “Alfred Hitchcock and the Making of Psycho,” directed by newcomer Sacha Gervasi. The famously corpulent director (Anthony Hopkins, unrecognizable under layers of prosthetics) was, apparently, a psychological mess — a compulsive voyeur who fantasized about his leading ladies and terrorized his staff.

(See related story: “Catholic faith was present, not overt in Hitchcock’s life”)

Hitchcock was also, it seems, a control freak who suspected the motives of just about everyone, even his devoted wife, Alma (Helen Mirren).

Intriguingly, Alma seems to have been his muse — and the power behind the throne. A talented editor in her own right, this endlessly patient spouse knew how to sober up “Hitch” and save the day. The tender story of their tempestuous yet faithful marriage is a high point of the film.

In 1959, Hitchcock was the world’s greatest director with a string of stylish thrillers to his name, most recently “Vertigo” and “North by Northwest.” But he was always searching for his next hit, and Hollywood was changing fast.

“Audiences want to be shocked,” Hitchcock observes. “They want something different.”

To meet the challenge, he settles on “Psycho,” a sensational novel by Robert Bloch, based on the real-life case of notorious serial killer Ed Gein. The lurid story is rejected by the studio, so Hitchcock opts to go it alone, financing the movie himself and crafting a sensational publicity campaign.

At one point, he orders his staff to purchase every copy of “Psycho” in the United States to prevent the public from knowing the plot — and the ending.

“Hitchcock” goes behind the scenes of the production, with stars playing stars, including Scarlett Johansson as Janet Leigh, whose character was destined to die in that famous shower scene; and James D’Arcy as Anthony Perkins, playing Norman Bates, the twisted motel owner who is dominated by his mother.

Even the ghost of Gein (Michael Wincott) pops up on set, to ask Hitchcock tauntingly why he would make such a shocking film.

Why indeed. Raised a Catholic and reconciled to his faith before his death in 1980, Hitchcock can be said to have done a great disservice with “Psycho.” As this film shows, he battled the Hollywood censors to allow an unprecedented degree of explicitness: In addition to the infamous shower scene, “Psycho” was also the first mainstream movie to show an unmarried couple in bed together.

There were long-term implications to Hitchcock’s “victory;” his triumph over the censors contributed to the breakdown of the long-standing production code that had regulated movie content since the 1930s.

The film contains graphic recreations of movie-making violence, a scene of implied adultery, sexual innuendo and some profane and rough language. The Catholic News Service classification is A-III — adults. The Motion Picture Association of America rating is PG-13 — parents strongly cautioned. Some material may be inappropriate for children under 13.

PREVIOUS: Catholic faith was present, not overt in Alfred Hitchcock’s life

NEXT: As a Christmas movie gift, ‘Les Miserables’ has it all