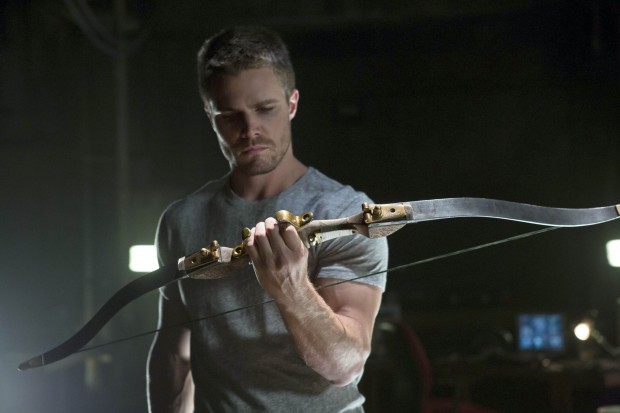 Stephen Amell stars as Oliver Queen in an episode of the CW series "Arrow." (CNS photo/Jack Rowand, The CW)

NEW YORK (CNS) — Although superhero movies have been all the rage in recent years, the superhero TV series is more of a rarity these days.

Once upon a time, Adam West’s Batman was a staple of primetime television; the caped crusader is now almost exclusively a movie franchise. While comic book adoptions for TV such as AMC’s zombie-fest “The Walking Dead” — now in its third season — are getting big ratings, the small-screen presence of the traditional superhero seems to have dwindled.

The most obvious exception to this trend was “Smallville,” the popular Superman-based show on the CW that began in 2001 and ended last year.

Enter “Arrow” — a new series, also on the CW, showcasing the adventures of longtime DC Comics fixture Green Arrow. The entry of “Arrow” into our living rooms coincides with last year’s successful reboot in print, initially under the creative team of Dan Jurgens, J.T. Krul and George Perez, as well as a brief team-up with the Justice League in writer Geoff Johns’ signature franchise.

Previously, Green Arrow also was given significant airtime on the aforementioned “Smallville.”

Given this prominent, multimedia exposure, it’s important for adult comic book fans, and for the parents of the genre’s younger readers, to be aware of the complex issues that surround this Robin Hood wannabe — especially since he’s not all that he seems.

Green Arrow’s alter ego Oliver is the billionaire son of Robert Queen — founder of Queen Industries. Queen Jr.’s origin story has been revised on a number of occasions since his first appearance in “More Fun Comics #73” in 1941. But, in keeping with a by-now-cliched aspect of superhero lore, his story always begins with a tragedy.

In the more recent comic books, Oliver hosts a party on an oil rig and, by deliberately going light on security, unwittingly invites an invasion by mercenaries. They slaughter many of Oliver’s nearest and dearest, leaving him the sole survivor.

The TV account has the family’s luxury yacht capsizing — an accident that eventually proves fatal, not only for Oliver’s father, but for his girlfriend’s sister, with whom Oliver has been having an affair.

Whatever the form of the crisis, it always acts as a road-to-Damascus moment for Queen, although obviously not one that involves Christ in any way. Oliver sees the error of his ways, reforms his life, and transforms himself into a highly skilled archer-cum-martial arts expert who fights for social justice.

If some commentators have declared Batman a right-wing superhero, Green Arrow can certainly be considered his lefty counterpart. In true Robin Hood fashion, he attacks the wealthy and powerful in order to protect the little guy.

In light of the widespread anger currently directed against the financial industry and those who steer it, few will be surprised to note that Green Arrow has been pushed to the forefront of DC’s lineup.

A superhero with a social conscience certainly sounds like an appealing character for believers. At first glance, Green Arrow’s preferential treatment of the poor and his battle against institutionalized inequality and corruption would seem to comport well with Catholic social teaching.

Yet Green Arrow poses problems for readers of faith. In the first place, his adventures are not overly family-friendly. While free of really troubling elements, they are still best for mature adolescents and adult fans.

Deeper analysis of the morality at work in Green Arrow’s story, moreover, reveals its fundamental divergence from scriptural values.

This superhero, for example, does not share Batman’s aversion to killing. While Batman absolutely refuses to take life, Green Arrow seems to justify homicidal means in the pursuit of just ends. In the same way, he does not seek greater equity by attempting to reform or enlighten his enemies. Instead, he simply takes it upon himself to despoil them of their property.

While stealing and a resort to violence are relatively common in the comic book world, what makes Green Arrow’s saga especially deceptive is that his morally unacceptable actions are disguised as permissible tactics in a crusade for goodness. The poorly catechized and the less discerning might easily mistake his series of attacks for a heroic quest — one fully in line, moreover, with the precepts of the church.

This is not to say that Green Arrow’s story provides no valuable lessons. Oliver Queen’s decision to cast aside his life of luxury and indulgence in favor of a theoretically honorable, if practically flawed, battle against wickedness has the same broad outlines as the biography of many a saint, perhaps most obviously, St. Francis of Assisi.

But the fact remains that Queen’s redemption is brought about solely by his own efforts at self-improvement. He relies on no power outside or beyond himself. Taken together with the misguided permission he gives himself to kill and plunder wrongdoers, his do-it-yourself conversion makes him a figure Catholics need to approach with caution and ponder with care.