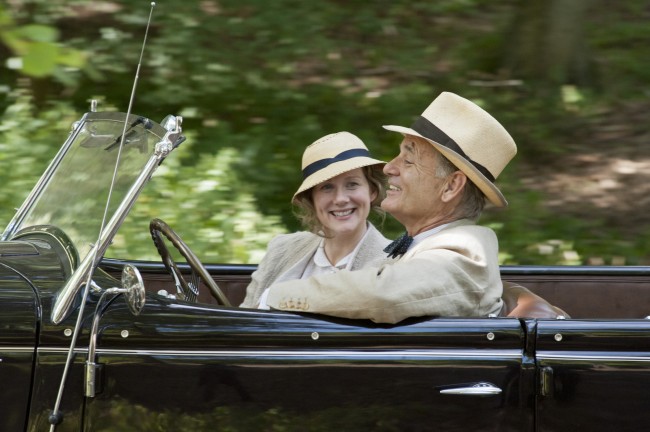 NEW YORK (CNS) — “Oh, Those Randy Roosevelts!” might be a better title for “Hyde Park on Hudson” (Focus).

This comedy-drama purports to chronicle — and blithely celebrates — the real-life sexual indiscretions of the 32nd president of the United States, his first lady, his cousin and assorted members of his staff.

Director Roger Michell (“Notting Hill,” “Morning Glory”) and screenwriter Richard Nelson have based their film on the letters of Margaret “Daisy” Suckley, Franklin D. Roosevelt’s fifth cousin. Her account of an intimate relationship with the president was discovered after her death in 1991.

Daisy (Laura Linney) narrates the film, which opens in New York’s Hudson Valley in the summer of 1939, as the winds of war are blowing in Europe. Daisy lives near Hyde Park, the Roosevelt family home which FDR (Bill Murray) has turned into his northern White House.

Daisy is summoned by FDR’s indomitable mother Sara (Elizabeth Wilson) to “take his mind off work.” As Daisy reflects, “All he wanted was to relax. He said I helped him forget the weight of the world.”

And how. After admiring the president’s famous stamp collection, Daisy is soon taken by the president on long drives into the countryside. They share cigarettes, and soon share a whole lot more, the effects of FDR’s polio notwithstanding.

Daisy takes all this in stride, and nary a mention is made of mortal sin. Instead, she gushes, “I knew now we weren’t just fifth cousins. We were good friends.”

We’re shown that FDR lives apart from his wife, Eleanor (Olivia Williams), who, so the script maintains, prefers the company of so-called “She-Men.” Eleanor, too, casts a blind eye on FDR’s sins. “My husband has adoring eyes for young women,” she says.

Into this dysfunctional atmosphere arrive Britain’s King George VI (Samuel West) and Queen Elizabeth (Olivia Colman). They are visiting America to drum up support for their homeland should war erupt, and FDR has invited them to Hyde Park for the weekend.

A clash of cultures ensues, and here “Hyde Park on Hudson” diverges from 2010’s “The King’s Speech” in its portrayal of the young royals. King George is a stuttering mess, and the queen is a wreck, berating her husband and appalled by the informality and wild abandon of the colonials. She dreads the all-American picnic that the Roosevelts have arranged, complete with hot dogs and entertainment by Native Americans.

In the end, “Hyde Park on Hudson” has two points to make. First, FDR and the insecure king bond over martinis, the former giving poignant fatherly advice. A special relationship between the two countries is forged, which will lead to victory in World War II.

The second point is far more troublesome. Much is made of the fact that the press at this time kept a discreet distance, reporting neither on the president’s disability nor his marital infidelities. This is presented as a good thing, and we are to overlook any immorality.

As Daisy does; even when she discovers she’s not the sole object of the president’s affections, Daisy decides she is happy to share him.

NEXT: Books on Spain’s ‘Camino’ offer little for serious Catholics