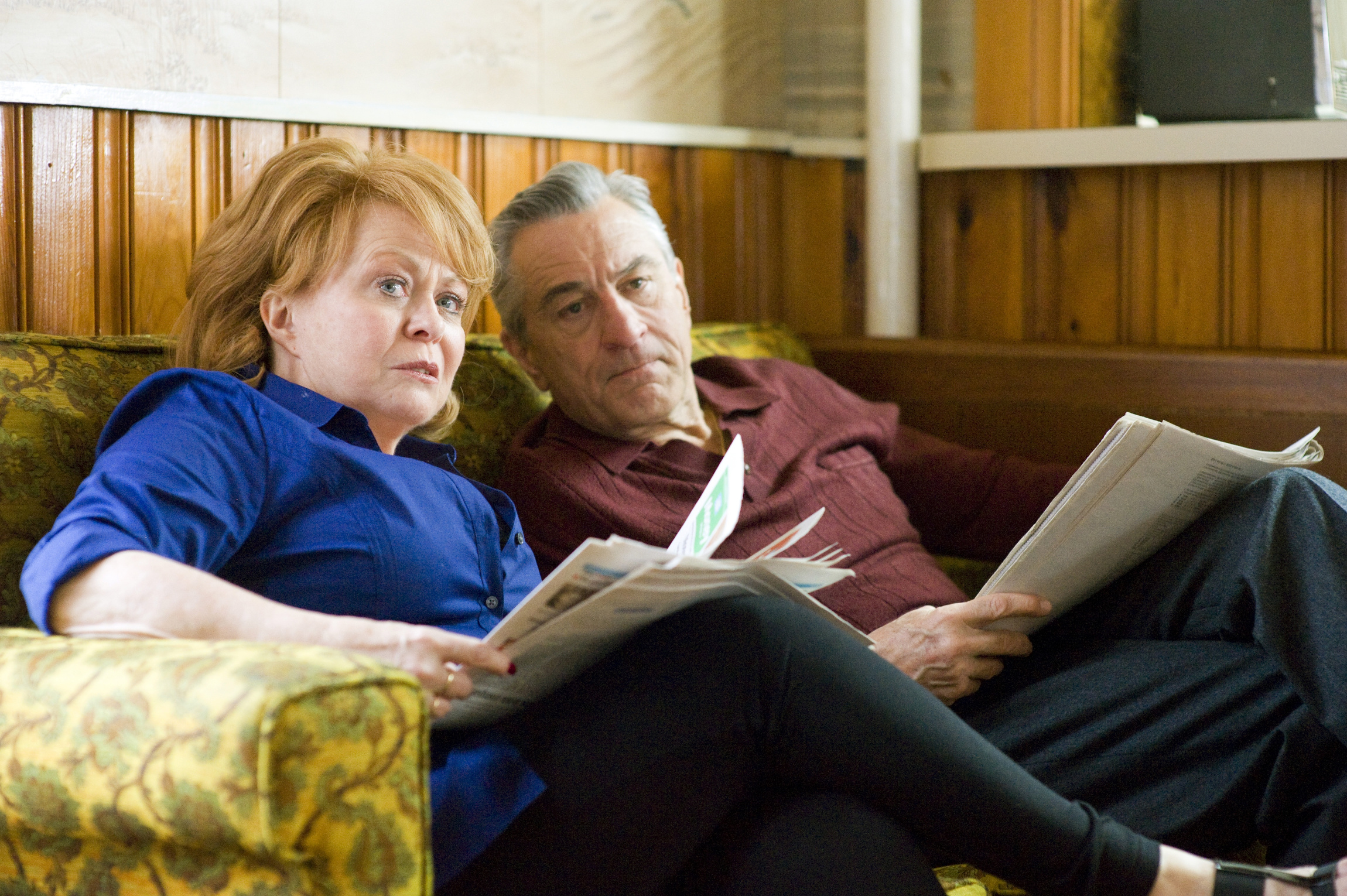 It’s not an easy maneuver to pull off. But it works because the source material, a novel by Matthew Quick, is rooted in an actual place populated by relatable characters, the acting ensemble is terrific, and Russell, who writes and directs, doesn’t shy away from awkwardness or feel-good sentiment.

(See a related story on a local woman, Anna Cappelletti, in whose Delaware County neighborhood the movie was filmed: Anna’s advice: ‘God takes care of everything’)

By turns uncomfortable, funny and touching, “Silver Linings Playbook” is big-hearted, off-kilter entertainment. The volume of four-letter words is the only major drawback, although one is more inclined to excuse foul language when it’s symptomatic of clinically verifiable anxiety.

Neuroses, disorders and syndromes abound in the middle-class Philadelphia neighborhood — actually filmed in Highland Park, Delaware County — where the Solitano family lives. Exhibit A is Pat Solitano (Bradley Cooper), whose mother Dolores (Jacki Weaver) checks him out of a Baltimore psychiatric hospital early in the movie. Ignoring professional advice, she’s willing to take legal responsibility for her son. “I don’t want him to get used to the routine here,” she tells a protesting doctor.

Turns out, Pat caught his wife Nikki (Brea Bee) cheating on him and beat up the interloper: a colleague of Nikki’s from the high school where they both taught. That incident, plus other unbalanced behavior only alluded to, resulted in a court-ordered stint in the mental institution and a restraining order barring him from coming within 500 feet of Nikki.

Pat moves into his parents’ house and, armed with an empowering motto (“Excelsior!”), pledges to remake himself by getting into better physical shape and reading all the books Nikki assigns to her students. His sole aim is to get back together with her and salvage their marriage.

During Pat’s eight-month absence, his father Pat Sr. (Robert De Niro) lost his pension and became a bookmaker. A Philadelphia Eagles fanatic, the elder Solitano is fervent about football in general. While profiting from taking people’s bets, he superstitiously follows a set of rituals that point to an obsessive-compulsive personality. The fact he’s been banned for life from Eagles home games for fighting indicates he too is prone to violent outbursts.

Shortly after coming home, Pat meets Tiffany (Jennifer Lawrence), a young widow in the neighborhood who reacted to her husband’s sudden death by acting out sexually. The two have much in common, most noticeably a lack of verbal inhibition that makes social interaction difficult. In due course, Tiffany volunteers to deliver a letter to Nikki, thereby circumventing the restraining order. In return, she asks Pat to help her train for an upcoming dance competition.

Like Pat and Tiffany, “Silver Linings Playbook” is volatile and moody. Yet beneath the genuine anguish there’s an abundance of sincere emotion.

The message about silver linings — about our ability to overcome unfortunate circumstances — feels less like a Hollywood contrivance than the truth. And the notion that the line between normal and crazy isn’t as clear as we often assume suggests that being judgmental short-circuits both hope and understanding.

PREVIOUS: ‘Will Many Be Saved?’ Good question, but book’s answers hard to grasp

NEXT: Author brings 16th-century Council of Trent to life